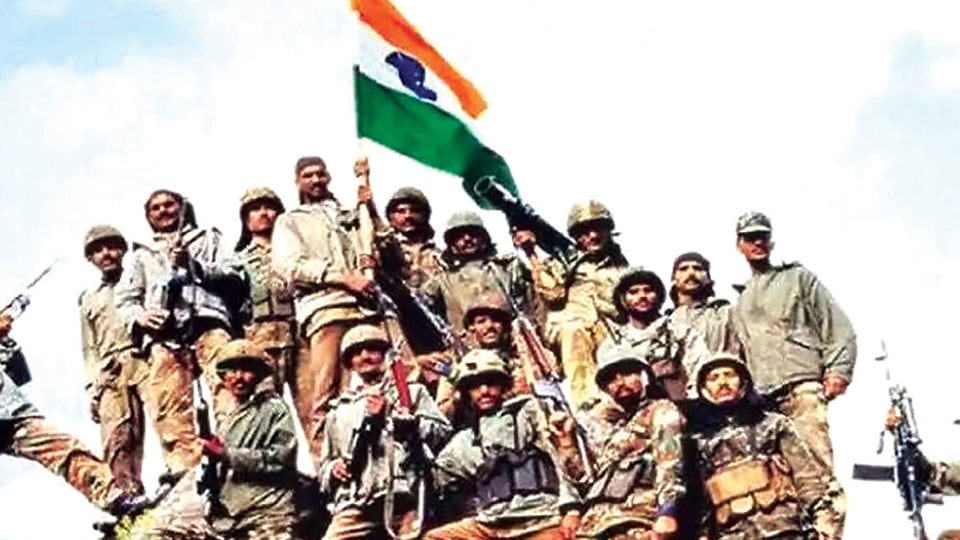 July 26, yesterday, we celebrated ‘Kargil Vijay Diwas’ to commemorate India’s victory over Pakistan in the high-altitude conflict in Jammu and Kashmir’s Kargil district and along the Line of Control (LoC) and paid tributes to soldiers who lost their lives. India launched ‘Operation Vijay’ to clear the posts in the Kargil sector, which were occupied by Pakistani soldiers and infiltrators. Kargil War ended on July 26, 1999. On this historic occasion, here we publish an article on Kargil victory by Mysuru-Kodagu MP Pratap Simha.—Ed

Capt. Vikram Batra, Capt. Hanifuddin, Lt. Saurabh Kalia, Lt. Manoj Kumar Pandey, Major Mariappan Saravanan, Grenadier Yogendra Singh Yadav, Lt. Keesing Clifford Nogrum, Rifleman Mohammad Aslam — each of these names have found a place in our society just as our folk stories. These stories not only inspire us but also indicate the sacrifices made by our brave soldiers.

The poem written by Sameer, the younger brother of martyred 24-year-old Capt. Hanifuddin, is very much similar to the uncertainties of life that Capt. Hanifuddin practically faced. Capt. Hanifuddin lost his father when he was just 8 years old and despite the tragedy, he never distracted from fulfilling the goals of his life. He had a lot of respect for the military uniform, considering it as a symbol of honour rather than a mere piece of dress.

His mother Hyma Azeez says that her ambitious son Hanifuddin, who held the Army in high esteem, decided to join the Indian Military Academy to become a brave warrior. He did not have any family background of Armed services nor had anyone in the Army who was known to him. But despite having a totally non-military background, Capt. Hanifuddin succeeded in joining the Indian Military Academy, where he trained to become an expert Commander.

Hanifuddin joined the Indian Army on June 7, 1997. Even before he could complete two years of service, the Kargil war broke out. Before that, he was posted at Siachen, a border post known for chilling cold. Hanifuddin, who was very much fond of songs, always used to carry a music system, wherever he went, according to his elder brother Nafees. Their mother Hyma Azeez was a classical musician and as such music naturally flowed in the blood of her children, he says. During free time, Hanifuddin used to sing his favourite song ‘Ek pal mey hai sach saari Zindagi Kaa’ in a melodious voice, as a refreshing entertainment to his fellow Army men.

When things were going on like this almost every day, Hanifuddin one day made a phone call to his mother saying that a war was likely to take place. He asked his mother not to keep the phone engaged at any point of time, while explaining her about the probable emergency like situation along the border. By the time Hanifuddin could get down from Siachen glacier, his Army regiment had received a message about the plans to recapture Turtuk area of Nubra Valley in Ladakh from the enemy.

Taking on the enemy

As such, Hanifuddin crossed the snow-clad glacier and got ready to take on the enemy. Ironically, the enemy Army, which was stationed atop the glacier, was in a more strategically advantageous position going by its numerical strength, supported by natural surroundings. But Capt. Hanifuddin, not bothering about all this, led his regiment on the war-front, taking the enemy head-on.

While studying at New Delhi’s Shivaji College, Hanifuddin was honoured with ‘Mr. Shivaji’ title as recognition of his courage. True to his courage, Hanifuddin fought with the enemy on the war-front as an unflinching soldier. Although he had less number of bullets, shells and other armoury, Hanifuddin overcame all this shortcomings by giving a befitting reply to the enemy.

But unfortunately Hanifuddin lost his life in the battle, leaving behind a legacy of courage, rather than that of his life. The Kargil war was fought in such a scary hilly terrain, that Hanifuddin’s dead body could not be brought back from the spot where he died, until the war was over.

The late Pramod Mahajan had once said that the most tragic moment of a man’s life comes when he has to carry the body of his son to the graveyard. As soon as Hanifuddin’s body draped in the Tri-Colour Flag arrived at the Army Headquarters, his mother Hyma Azeez said that she had taken a pledge from her son that he should be always ready for making the ultimate sacrifice when it comes to defending our motherland and her son has kept his pledge by sacrificing his life for the sake of the country. The country honoured martyred Capt. Hanifuddin with ‘Vir Chakra’ for having left behind a legacy of courage and patriotism. The life of 527 other martyred soldiers too has their own tale.

The story of Lt. Manoj Kumar Pandey is somewhat different as the soldier had made a vow that reads — “If death strikes before I prove my blood, I promise that  I will kill death.” Manoj Kumar Pandey, who was born on June 25, 1975, studied at Lucknow Sainik School in Uttar Pradesh where he won almost all the prizes. He had the distinction of passing the tough National Defence Academy exam in the first attempt.

After joining the Army, Pandey was assigned to Gorkha Rifles and entrusted with the responsibility of driving out the terrorists from Batalik Sector. That day on June 11, 1999, Lt. Manoj Kumar Pandey led his regiment’s operation to reclaim Jubair Camp that was occupied by the enemy. It was also a most significant Army operation for all strategic purposes. Pandey’s moment of his life came early morning on July 3, 1999 when the Armed forces captured Khalubar Pass that is a strategic location.

His battalion was marching ahead successfully, when it was stopped by the enemy, who had occupied strategic points in the vicinity. But in such a dangerous situation, Pandey had no option but to strike at the enemy with full force before sunrise. As Pandey’s Army surged forward, the enemy camp fired a range of bullets at the Army, in which Pandey suffered injuries on his shoulder and legs. But as the target was still far away, an unflinching Pandey continued to lead his regiment, killing two soldiers of the enemy camp and at the same time destructing the first bunker of the enemy.

Inspired by their leader Pandey, other personnel of the regiment surged ahead and succeeded in destroying the last bunker of the enemy camp. But unfortunately by then, the injured Pandey who was bleeding profusely all through the operation, collapsed near the last bunker and died.

During an interview he gave after passing the National Defence Academy exam in the first attempt, Pandey replying to a question on why he chose to join the Army, had categorically said that getting ‘Param Vir Chakra’ was his ultimate aim. His dream was fulfilled when the Government of India announced the country’s highest wartime decor ‘Param Vir Chakra’ posthumously on him, which was received by his father Gopichand Pandey. But it is ironical that Pandey, who used to often say “some goals are so worthy, it’s glorious even to fail,” was bestowed with the highest military award posthumously.

It is interesting to note here that both Capt. Hanifuddin and Lt. Manoj Kumar Pandey were just 24 years of age when they lost their lives. 24 years is an age when a common man usually begins to realise his responsibilities and duties. Hence it can be inarguably said that the two martyred Army Officers attained glory at such a young age by making the ultimate sacrifice for the sake of the country.

Remembering the sacrifices made by our martyred soldiers in the Kargil war, our heart breaks out while speaking about their courage and dare-devilry. By winning the Kargil war, the country succeeded in not only crushing the enemy and driving them out from occupied territories, but also has sent a message to the entire world that the Indian Army is next to none in the rough and tough wars in these modern times.