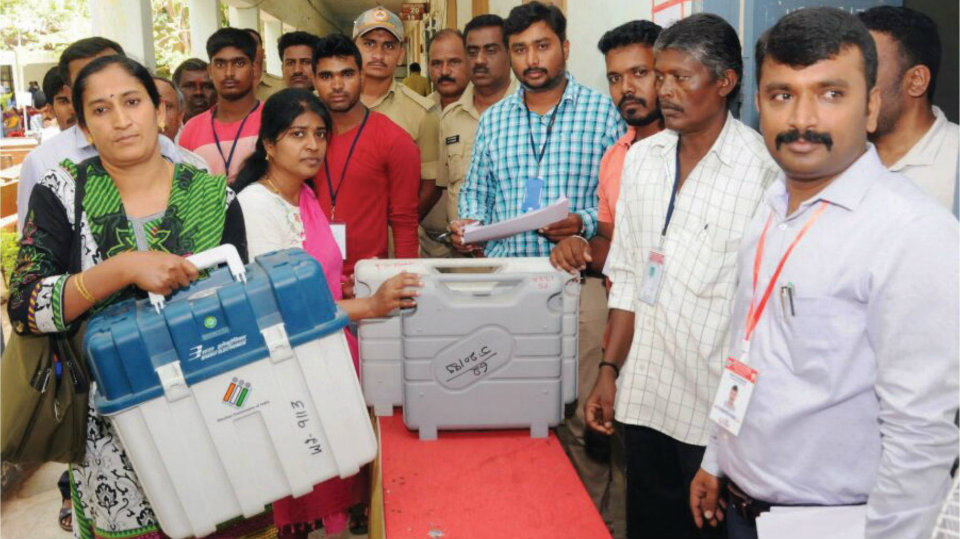 Mysuru: The political fate of candidates contesting the 15th Assembly elections will get sealed tomorrow after the State goes to poll. On its part, the Election Commission and the District Administration have appealed to the voters to exercise their franchise in a free and fearless manner without being induced, enticed or influenced by political parties.

Mustering centres across 11 Assembly segments witnessed a flurry of activity this morning. The polling officials and personnel deputed for poll duty reported at the mustering centres as early as 6 am and waited in groups for their turn to collect the election-related materials — Electronic Voting Machines (EVMs), Voter Verifiable Paper Audit Trial (VVPAT) machines, Control Units, indelible ink vials, brushes and other stationery.

In the district, there are 24,93,407 eligible voters who will elect their representatives at 2,860 polling booths (including common booths and auxiliary booths) on May 12 (tomorrow) from 7 am till 6 pm. Apart from voters, 16,582 government employees will be involved in the election process.

Polling officials began arriving at the mustering centres starting from 5.30 am and initially, their attendance was taken. They were allowed to cast their postal ballot and all the officials can cast their votes through postal ballots till May 14.

READ ALSO  No role for Kempaiah, political advisors as poll code kicks in

Ready-made checklists were given to polling officers where each item (machines and stationery) were handed over and marked. While handing over the machines, serial numbers were marked and officers were given guidance on how to operate. A separate section was arranged at all the mustering centres where master trainers trained the polling officers and cleared their doubts.

KSRTC buses were parked in front of mustering centres and after obtaining the materials, officers boarded their respective buses. As the polling officers had come to the centres early, breakfast was arranged at the mustering centres. They left to their polling booths after lunch at 12 noon. Each bus carried officials and Police personnel from five booths.

Speaking to Star of Mysore, General Poll Observer Amit Chaudhary said that basic facilities including electricity, drinking water and toilet facilities have been provided at all the booths and in case there are problems, the presiding officers have been asked to report the same to the District Electoral Officer.

After the polling officers reach their respective polling booths, they will have to take out the machines out from their boxes and connect the EVMs, VVPAT machines and the Control Units. Before the start of the actual poll tomorrow, a mock poll must be conducted with at least 50 votes in the presence of candidates or their agents. Various checks are conducted by polling agents, observers and security forces. The Election Commission (EC) has provided first-aid kits for the first time to all polling booths. The District Administration has done all necessary steps to provide timely medical aid to the needy.

Besides, in each taluk hospitals, five beds have been reserved to treat emergency during polling. In each taluk, two squads which include a doctor and a nurse has been formed to attend to emergencies.

If the patient needs additional medical care, they will be shifted to the taluk hospital or to any private hospital nearby. Instructions have also been given that no staff including doctors and nurses should take leave on voting day. 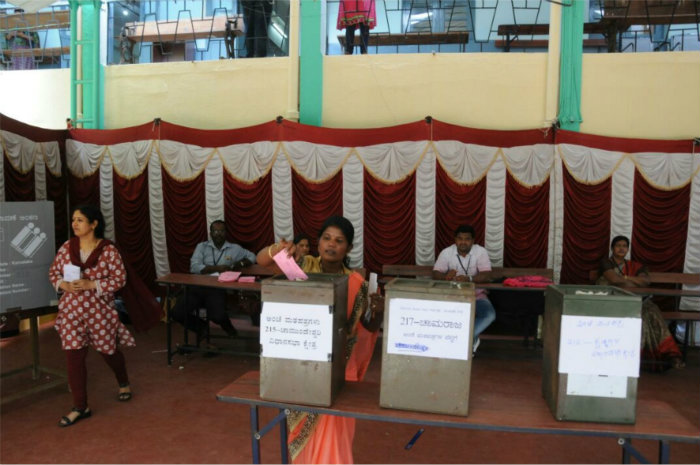