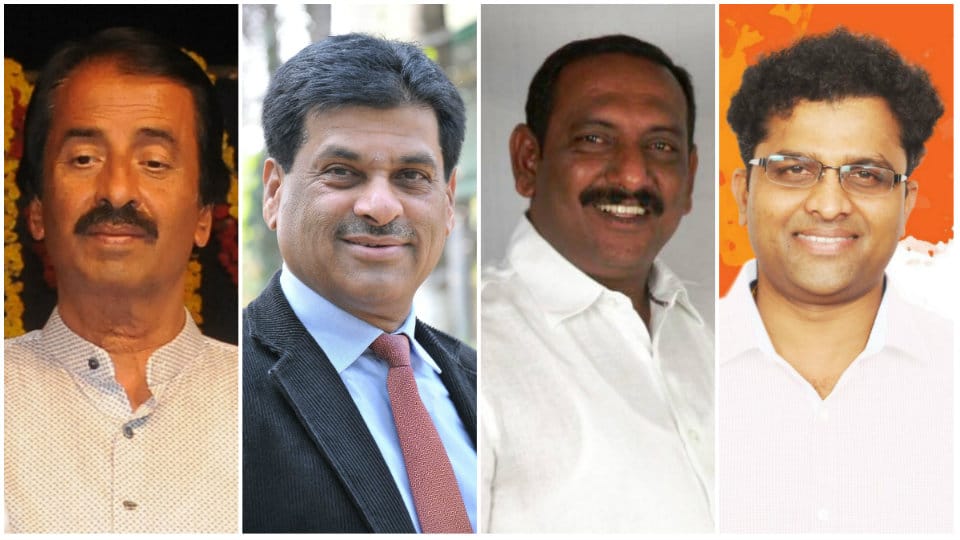 Mysuru: With the Election Commission of India (ECI) announcing the poll schedule, parties have shifted gears to election mode, with one party trying to outsmart the other in poll preparations.

While the ruling Congress is making its own calculations on fielding winnable candidates, the Opposition BJP and JD(S) are not lagging behind, charting out their own plans for fielding strong candidates. In Chamaraja Constituency which is currently held by the Congress, all the three major political parties are trying to outwit each other by adopting different strategies to defeat the opponents.

With Vokkaligas being a dominant community in  Chamaraja, incumbent Congress MLA Vasu is making all attempts to get the party ticket again for the May 12 Assembly polls.

As far as the BJP is concerned there are too many aspirants and the JD(S) is hit by dissidence with former City JD(S) Chief K. Harish Gowda openly revolting against the party.

However, what is common among the three major parties is that all of them are set to field Vokkaliga candidates as the constituency has a large share of Vokkaligas.

Vasu, who is instrumental in the launch of various development projects in the constituency recently, is eyeing a second consecutive term. Vasu, said to be sure of himself getting the party ticket, has already begun his campaign in the Constituency. However, Vasu is said to be facing an obstacle as MUDA Chairman D. Dhruvakumar, who is also a former Mayor, too is eyeing the ticket. Dhruvakumar, who is a close associate of Chief Minister Siddharamaiah, is also making his own efforts to get the Congress ticket from Chamaraja, much to the dismay of Vasu. 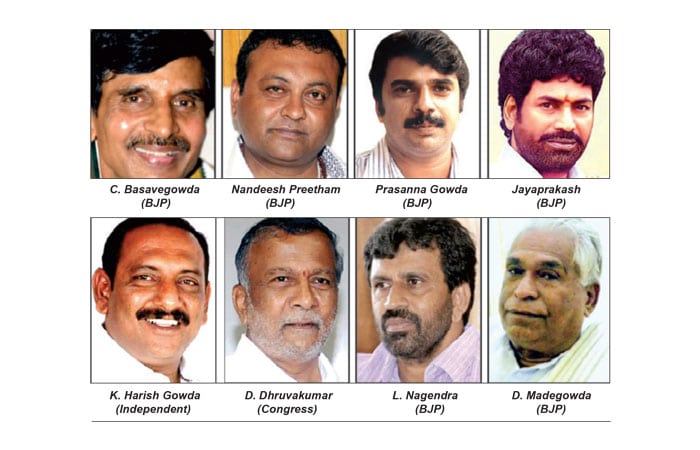 As far as the JD(S) is concerned, the party seems to be split, as former City JD(S) President K. Harish Gowda has revolted against the party after it announced the candidature of former Vice-Chancellor Prof. K.S. Rangappa, as the candidate.

Prof. Rangappa who is a close relative of former PM and JD(S) Supremo H.D. Deve Gowda has already launched a campaign across the Constituency, by holding ward-wise and booth-level meetings.

Prof. Rangappa’s candidature has not gone down well with Harish Gowda, who has been eyeing the party ticket since 2008.

Deeply upset over the denial of JD(S) ticket this time too, Harish Gowda, who has declared that he will contest as an Independent, has already launched a widespread campaign across the constituency holding a series of meetings in almost all localities coming under the Constituency. However, Prof. Rangappa, not lagging behind, has been successful in getting the party workers campaign for him.

In BJP, there are too many aspirants, which has become a big headache for the party in the selection of the candidate.

The BJP which held rein over the Constituency from 1994 to 2013 with Shankaralingegowda representing the segment for four successive terms, now seems to be struggling in the selection of candidate for the May 12 Assembly polls. Former MUDA Chairman L. Nagendra who contested as the BJP candidate in the 2013 Assembly polls, gave a tough fight to Vasu of the Congress and Shankaralingegowda who contested on a JD(S) ticket then.  But the BJP is said to be keen on fielding City BJP President Dr. B.H. Manjunath, who is said to be close to the RSS, besides engaging himself in various social activities and party organisation.

Corporator Nandeesh Preetham, son of former MLA late Shankaralingegowda, too is a keen aspirant. The other strong aspirant is BJP Raitha Morcha District President Prasanna N. Gowda, who has launched several initiatives for the farming community on his own and has been in constant touch with the public for several years.

The other aspirants include veteran politician and former MLC D. Madegowda, former MUDA Chairman C. Basavegowda and Jayaprakash, a former University Senate member, all recent entrants to the BJP.

What the probable candidates say

Incumbent Congress MLA Vasu, who is sure of getting the party ticket again, says that the people are eager to see a Congress Government again as it has launched several key development projects.

Listing out his achievements, which include setting up of Maharani’s Commerce and Management College, Jayadeva Hospital, Trauma Centre, 66 KV line etc., Vasu said that the people of the constituency were very much aware of his work as a Legislator and he was hopeful of victory if the party fields him again.

Reacting to reports that his name does not appear in the first list of 75 candidates, Vasu said that it is just a WhatsApp list and the KPCC will not officially announce the list of candidates unless the CWC (Congress Working Committee) approves it.

Speaking to SOM this morning, Vasu said that the list which has appeared in a section of the press is not at all an official one. Stating that as a sitting MLA of Chamaraja Constituency he had sought the party ticket once again, Vasu said he believes that no one else has filed an application for the seat other than him. Pointing out that he had already launched a campaign in the Constituency and right now (today morning) he was canvassing at Subbarayanakere, the MLA said he was very much confident that the party would allot the ticket once again to him, considering his good work in the Constituency over the past five years.

JD(S) declared candidate Prof. K.S. Rangappa, former VC of University of Mysore and KSOU, says that he has extensively covered the constituency and there was an overwhelming response from the people for his candidature. Pointing out that the 20-month rule of H.D. Kumaraswamy as the CM during the JD(S)-BJP coalition Government in 2006-2007, Prof. Rangappa expressed confidence of his victory as he has received tremendous response from the people in all MCC wards coming under Chamaraja Assembly segment.

City BJP President Dr. B.H. Manjunath, who is tipped as the likely BJP candidate, said that he was cent percent sure of getting the party ticket. Pointing out that there may be a disappointment among other candidates if he was given the party ticket, which is all but natural, Dr. Manjunath said that the party has the strength to take all leaders along in ensuring the party’s victory.

Maintaining that he has entered politics with an intent to serve the people much better, he said that he was very much hopeful of bringing Chamaraja constituency under BJP fold once again.

Meanwhile, Delhi CM Arvind Kejriwal led Aam Aadmi Party (AAP) also seems to be a serious contender in Chamaraja, with the party’s declared candidate Malavika Gubbivani launching a hectic campaign across the constituency, a couple of months even before the poll schedule was announced. Malavika, who is criss-crossing the constituency on a regular basis, is holding street and corner meetings, explaining the objective and programmes of the AAP and also appealing voters to bring about a change in governance by electing the AAP to power in the State.