With Khadi-clad political leaders out on election campaign trail, Khadi outlets in city are doing brisk business as sales have picked up. Almost all the Khadi shops are teeming with politicians and their supporters. Not only Khadi clothes, other election essentials like colourful party flags, caps, shiny party-colour petas, Shalyas and other paraphernalia are also in great demand. This Weekend Star Supplement features those businessmen who are an integral part of a political campaign without whom elections are just bland. 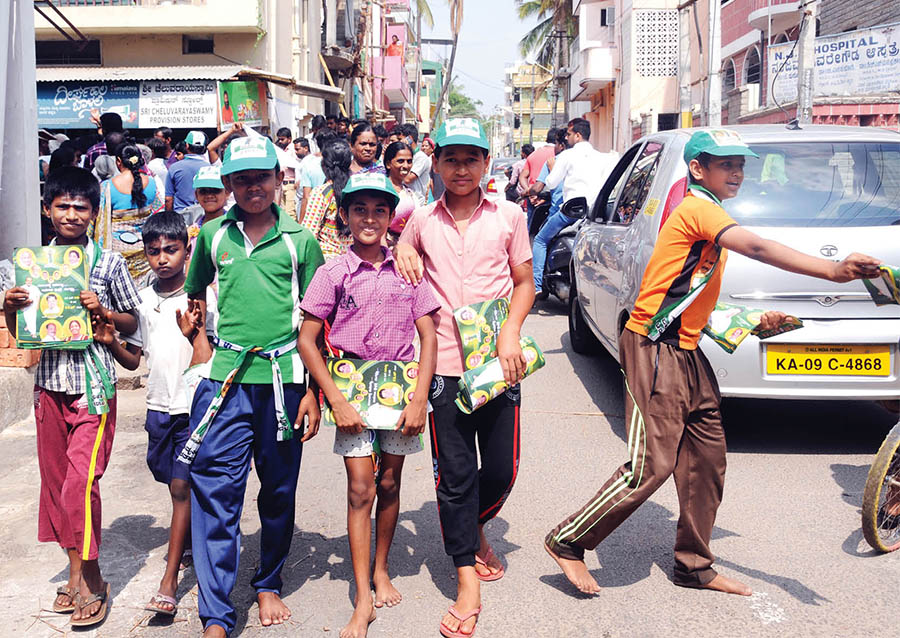 With summer and elections coming hand-in-hand, the atmosphere in Mysuru is heated up. With sweltering temperatures and election round the corner, the city is stuck in a cobweb of heat, pressure, seething anxiety as people prepare for a charged-up political action. And what a better way to keep bodies cool than wear Khadi?

Though election campaigns in India have evolved over decades, one thing that has been constant is the use of Khadi clothes by politicians. Khadi or Khaddar is something that is closely associated with India’s freedom struggle. This hand-spun cloth which has seen a transition from handlooms to powerlooms is still a relevant phenomenon in moving the masses.

With the election date nearing, political parties and campaigners are hoping to create a festive environment for their party. With the use of buntings, balloons, party caps, fairy serial lights, and other decorative items, parties are hoping to leave a huge impact in the minds of voters. A few stores in Mysuru cater to such exclusive election decorative items. No wonder it is the festival of democracy and no carnival is complete without proper celebrations and decorations.

READ ALSO  Eye of the EAGLE

K.R. Anand runs the Jupiter Forum in Shivarampet where decoration items that include election party decorations, political rally decorations such as flags, caps, flexes, buntings, party hats, etc. are sold. He says, “In Mysuru there is a small spike in our business whenever big political heads come down.  We made a reasonable business recently, when Rahul Gandhi, Amit Shah, H.D. Kumaraswamy and Siddharamaiah came. A lot of shawls, petas and garlands were sold during that period.”

“We have been running this store since 70 years. Our store was earlier near Chikka Gadiyara.  Those days, elections used to be like a festival and campaigns used to be like Jaatres (carnival). We used to sell buntings and political flags that would be decorated all along the roads and streets and we used to receive orders for huge flexes. The common public during those days used to predict the winner or the popularity of the candidate by analysing which party’s decorations outnumbered the other. But today, we cannot even predict how our sales will be,” he adds.

Janatha Agencies located on the Krishna Rice Mill Building on the 100 Feet Road is another such shop which prepares decoration items especially for elections. This store which has been functioning since 25 years mainly caters to sports trophies, cups, medals and other mementos. But during election season, they, along with other decorative items, sell specially designed election buntings, lights, banners, flexes, caps, petas etc.

N. Jenesha of Janatha Agencies has wide varieties of campaign materials that are desired by all political parties.

The owner of the shop, N. Jenesha says, “Till now there has not been much business of election items this year.  Earlier, parties used to come and get their flexes and big banners designed by us. But perhaps it could be because of the bans imposed by officials on flexes and banners this year, there have not been many sales. This time, we have got specially designed caps and petas of Congress, BJP and JD(S) which have been procured from other states. We are hoping when parties go for door to door campaigning, they will buy caps, Shalyas from us and distribute to them.” Jenesha adds that in the near future, his shop will start manufacturing such petas so that the materials get a local flavour.