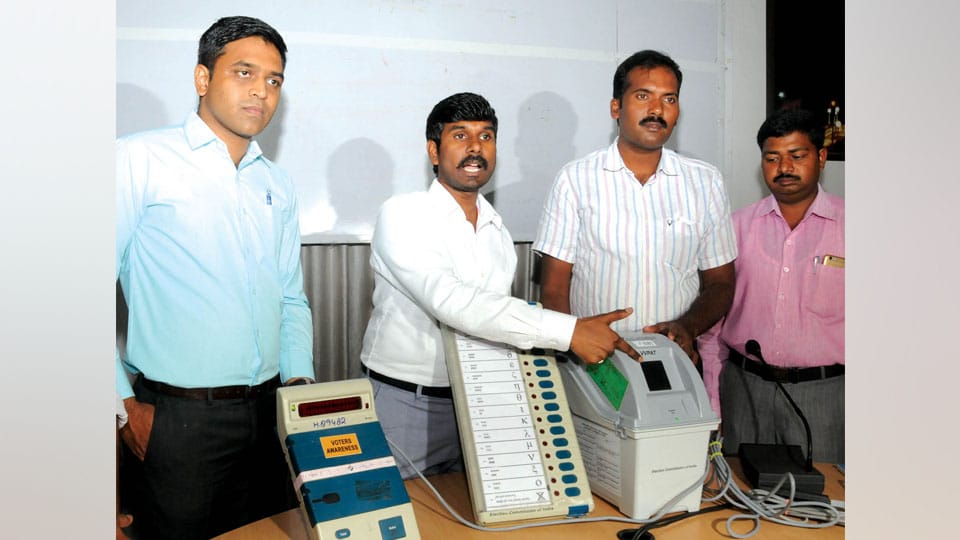 Mysuru: Stating that any person can lodge complaint against VVPAT (Voter Verified Paper Audit Trail) if he/she had any doubt about it, Deputy Commissioner (DC) K.B. Sivakumar however said that immediate criminal action will be taken in case the complaint is found to be false.

Briefing media persons on election-related issues at his office here this morning, Sivakumar said the Election Commission (EC) has maintained that VVPAT is 100 percent fool- proof and there is no room for malpractices.

Pointing out that based on media reports, the district administration has registered three minor cases of model code of conduct violation so far, the DC clarified that these cases were only against individuals and not against any political party.

Noting that following a directive from the EC, the administration has set up a District-level Advertisement Certification Monitoring Committee, the DC said that it was mandatory for anyone intending to place poll advertisement to take prior approval from the Committee.

“The advertiser has to file an application three days before placing advertisements. The authorities, after screening the content, will approve or disapprove the ad based on the content. Such advertisements which may incite law and order problems or fan communal or caste hatred or intended at malicious campaign, will be rejected,” the DC said.

Continuing, he said that a media cell will be set up in the city on Monday to facilitate political parties, leaders and others to place their ads Statewide and added that every advertisement that appears in the print media must bear the name and cell phone number of the advertiser.

Explaining the guidelines for publicity materials in residential areas and other public spaces, Sivakumar said the guidelines should be strictly adhered to.

The DC gave a dummy demonstration of EVM, VVPAT and its control unit, VVPAT display and status on the occasion.