Mysuru: Bahujan Samaj Party (BSP) President Mayawati yesterday gave a clarion call to voters to keep both the Congress and BJP at bay and vote for the JD(S)-BSP combine to create an inclusive society.

Mayawati was in Mysuru yesterday to launch the campaign of the JD(S)-BSP combine ahead of the polls and she addressed a rally at Maharaja’s College Grounds. “I urge you to reject the Congress and the BJP which have neglected the poor, the Dalits and the  backward classes.

The Congress, which had a stronghold over the Governments in the country for several decades, did not allow the downtrodden to prosper, for its political gains,” she charged.

“In view of promoting the welfare of the Dalits and backward classes, the BSP has formed a coalition with the JD(S) in Karnataka. When the BSP was in power in Uttar Pradesh, it strived for the development of all communities. If the JD(S)-BSP combine is voted to power, Kumaraswamy will give a pro-people administration,” she said.

She exuded confidence that the JD(S) and BSP combine is a winnable combination and Kumaraswamy will be the next Chief Minister of Karnataka. “The BJP and team were against the implementation of the Mandal Commission Report. The Congress praised Dalits but it didn’t implement the Commission Report. The Congress also failed to recognise the services of Dr. B.R. Ambedkar by giving him Bharat Ratna. It was the V.P. Singh Government that fulfilled both the wishes of BSP,” she stated. 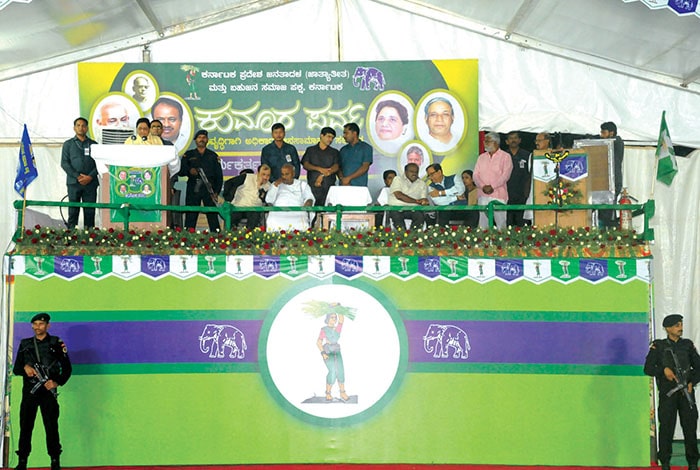 Mayawati cautioned the people not to pay attention to the opinion polls that had predicted third place to the JD(S) in the seat tally, and instead support the JD(S) and BSP candidates in the elections. She said that the JD(S) and the BSP entered into an alliance to safeguard the interests of Dalits, Adivasis, religious minorities, farmers, small traders, and the poor, and work for their well-being.

“JD(S) and BSP combine will pave the way for an alternative force at the Centre in the 2019 Lok Sabha elections for which the Karnataka Assembly polls is a precursor,” she added.

Both Kumaraswamy and Mayawati referred to the statement of Congress leader Salman Khurshid that the party had “blood on its hands” to state that it     was indictment enough that the Congress had failed to protect the minorities.

FIGHT BETWEEN MONEY AND PEOPLE

JD(S) Supremo H.D. Deve Gowda said that this election is a fight between money and people. “We don’t have money. We have to show them people power. We have received support from BSP, AIMIM and Telangana Chief Minister K. Chandrashekar Rao to form a BJP and Congress-free Government in Karnataka,”    he said.

“The Congress derives a wicked pleasure in describing the JD(S) as the ‘B’ team of the BJP. Why did the BJP withdraw the candidature of B.Y. Vijayendra, son of former Chief Minister B.S. Yeddyurappa, from Varuna, where Siddharamaiah’s son Dr.Yathindra is contesting? There is a possibility of a secret pact between Siddharamaiah and Yeddyurappa. We have coalition with the BSP and we do not have any understanding with any other party. We have the confidence to take both the Congress and the BJP head-on,” he said.

The first joint convention of workers from JD(S) and BSP in the run up to the Assembly polls received lukewarm response as party workers and supporters did not turn up in large numbers. The meeting was delayed by nearly three hours, leading to disappointment among activists. The meeting was scheduled to start at 3.30 pm but commenced only around 6 pm.

But leaders attributed the poor response to confusion during scrutiny of nomination papers. 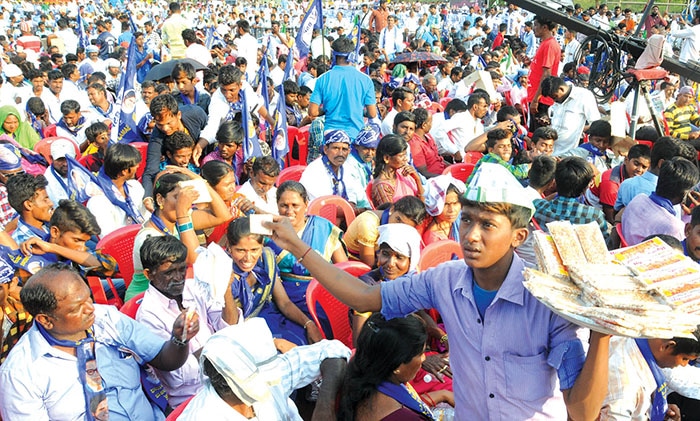 JD(S) Supremo H.D. Deve Gowda and State unit Chief H.D. Kumaraswamy both admitted that the response was not up to their expectations.

Kumaraswamy, however, announced that he would organise a bigger meeting at the same venue before elections.

“The candidates were perhaps busy with filing nominations and scrutiny and hence did not pay attention to organising this rally,” Kumaraswamy said.

He referred to the large turnout in the rally held in February in Bengaluru and said, “That was a historic rally and we wanted a similar turnout at Mysuru but we have failed to organise  it in a bigger way.”

2 COMMENTS ON THIS POST To “Keep both Congress & BJP at bay, Mayawati tells voters”