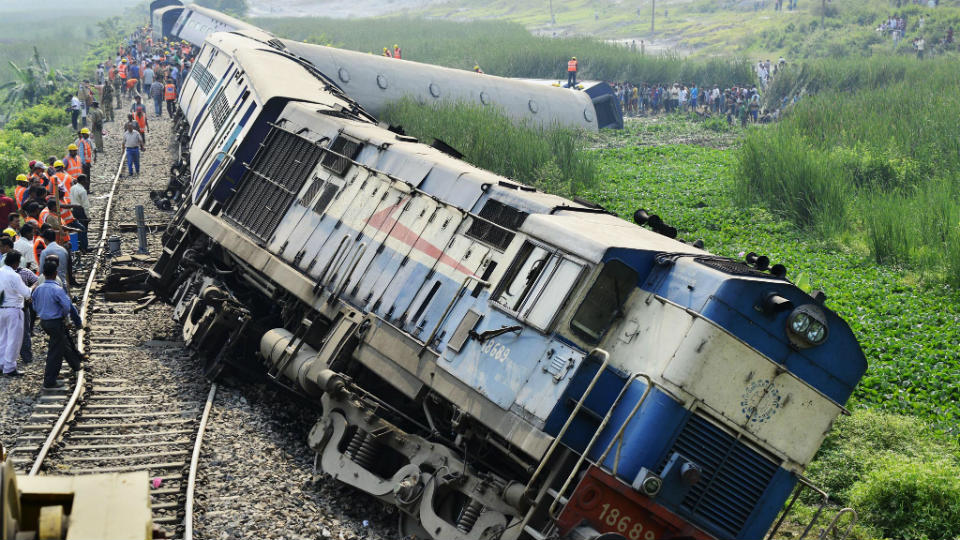 Today morning when I picked up my newspaper I was pained to read that there had been three train accidents yesterday in our country in just nine hours. Although there had been no deaths this time, it was still a pretty bad score in the already dismal track record of our vast rail network.

Of late we have been witnessing frequent rail mishaps in our country with some very disturbing statistics of morbidity and mortality. All such accidents only cause brief flutters in our media and our Parliament. There is no long-lasting remorse either among the khaki-clad workers who directly operate our Railways, toiling in the hot sun or even among the white-collared babus who oversee their work from their cool air-conditioned offices.  Ordinary people like you and me feel disturbed and anguished and victims’ relatives feel outraged and enraged. And, our Khadi-clad netas effectively douse these sentiments of embitterment with the constitution of an enquiry committee and promises of better management in the future.

While we never get to see the end result of these enquiries which naturally seem only cosmetic, the promises of better management never fructify, going by the fact that we see identical accidents continuing to occur from time to time. Since trains are our largest means of mass transport any major train accident naturally results in much loss of life and limb. Investigations into rail accidents reveal that although some other causes too are sometimes responsible, most collisions are very often the result of human error and most derailments are due to track failure. That is why it is very important to ensure that the highest standards of safety and security are maintained while operating our railway system. It is also equally important to ensure that the highest standards of quality are maintained in all that goes into our rolling stock and rails.

The weakest link in the former sector is the lackadaisical attitude most of us Indians suffer from in everything that we do and the culprit in the latter sector is the twin-headed monster of corruption and kickbacks which wreaks havoc on the quality of the output of all our public sector undertakings. No government contract in our country is free from this ‘percentage’ malady. This dirty grease on the palms of our administrative establishment is the lubricant on which our entire nation moves. There is no denying the fact that speed is the factor that causes the greatest damage in any rail accident. This only goes to show that as things stand now we are not yet able to satisfactorily ensure the safety of our superfast trains and we are yet to learn a lot more than what we know of this art. This being the case, the frequent announcements from our Central government that it is looking for tie ups with foreign countries to introduce faster and faster trains seem pointless.

Going by the speed at which trains move in some of the most developed countries, our trains naturally seem very slow. Just because Japan, a country that is itself barely longer than some of its trains, has its superfast ‘Shinkansens’ it does not mean that we too need them. I wonder why anyone in Japan, or the rest of the world for that matter, needs to travel at break-neck speed. Are we all in some sort of a crazy race where we need to set newer and newer records with faster and faster trains?

When we have not been able to make our existing snail-paced train travel safe enough from the point of view of international standards how can we think of introducing faster trains that will demand a much higher level of vigilance and operational safety from the staff.  Just importing or turning out fast trains from turn-key projects is not enough. We need to inculcate a sense of concern and responsibility in our operating staff that will make them adhere to the highest standards of safety that we find in the rest of the developed world. A devil-may-care attitude, helplessly trapped in our age-old third-world mindset, is not going to be of any use in ushering in and handling this change that we are hoping to bring in.

And, incidentally do think if we really need to have much faster trains than what we already have in our subcontinent? Or do we need them just to be able to say that we are also in sync with the rest of the world? Is it not more important to be able to say that our trains that are reasonably fast are among the safest ones in the world? Is it not also better if we are able to first feel proud and proclaim to the world that the highest standards of honesty, integrity and hard work that we have developed is what is behind the safety of our railway system?

Canada and the United States, two of the most developed countries of the world, have vast railway networks like ours. They are in fact the countries that need fast trains that can quickly transport people across great distances. But surprisingly they have some of the slowest trains by modern standards. A slow train across Canada or the US is something the people there are proud of as it is considered the most enjoyable travelling experience they can boast of. And, they have the best records of rail safety too.

A train ride across our country too is perhaps the best way to savour its vibrant and kaleidoscopic panorama both for us and our foreign guests too. What is the point of travelling by train if we cannot see at a slow enough pace the way our hills give way to forests and the forests give way to grasslands and lush green fields? Why should we travel at all if we cannot see our farmers tilling their land or threshing their grain or just grazing their sheep? Or, svelte village belles in colourful costumes, heading home with water pots delicately balanced on their hips and heads! The magic of train travel lies in being able to savour these sights that transport us back to our childhood when nothing seemed more enjoyable than a simple train journey. Would this experience be just as joyous if these sights are simply reduced to blurred flashes of brown and green that can make you feel giddy as you shoot across the land in a bullet train? Do ponder over this!

3 COMMENTS ON THIS POST To “Keeping our Trains Slow & Safe!”