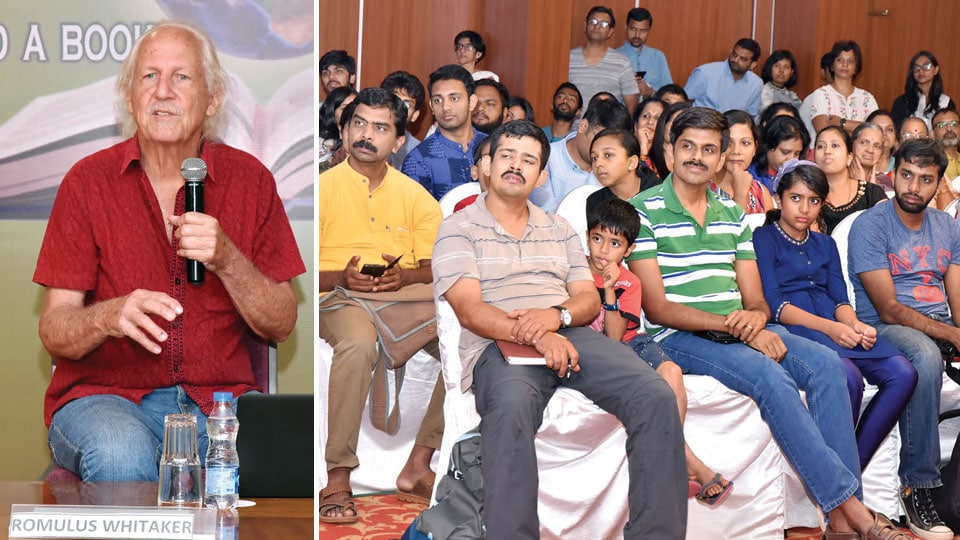 Mysuru:  Literature Festivals are not only about authors presenting their views and ideas but it is also about engaging the audience in a lively interaction. This was very much in evidence as the two-day third edition of the Mysuru Literature Festival organised by Mysuru Literary Forum and Charitable Trust and Mysuru Book Clubs (2015)  came to a close with the curious children asking interesting questions at the concluding event at Hotel Southern Star here yesterday.

The erudite, committed wildlife conservationist, Founder of the Madras Snake Park and Madras Crocodile Bank Trust, Romulus Earl Whitaker, who speaks a smattering of Kannada, Tamil and Hindi, as he finished his presentation titled “The World of Crocodiles,” the eager children aged between 4 and 15, started raining him with questions even as he fielded them with aplomb.

To a question from a child “Where did you go when you found the snake?” Whitaker said that he was just four-years-old when he caught a snake called milk snake in New York, took it home and showed it to his mother thinking it was the biggest worm, who instead of shooing it away told him how wonderful it looked. His love for snakes began from then and increased when he came to India.

To another question what do snakes eat, he said they can eat even big deer, while he was a bit stumped when a child asked him how to create awareness about snakes apart from showing videos and speaking about it.

Whitaker, in reply to a question on how he was managing to keep the crocodiles in his park when there was so much of water problem in Chennai, said that though he personally did not face any problem because he had chosen the right place, still he was willing to donate 1,000 crocodiles to anyone interested in starting a new crocodile park anywhere in the country.

On the Ganga River, he caustically remarked that though it is considered a holy river, it was one of the filthiest, while the unholy Chambal River is one of the cleanest from which the water can be drunk directly.

Earlier, in the session on “Marriages of the Wild — Conservation and Cohabitation,” Whitaker who participated along with other authors Janaki Lenin (his wife), Sunita Dairyam, Harini Nagendra, Seema Mundoli, moderated by Priya Davidar reminisced about how when he set up the Snake Park, students from IIT Madras, dropped out of their courses and joined him and went on to become great conservationists.

Before this session Prof. Chandan Gowda of Azim Premji University discussed about the relevance of  the book written by M.K. Gandhi in Gujarati titled ‘Hind Swaraj’ in 1909 while he was travelling in a ship from South Africa to London and his thoughts on India’s Home Rule. Senior Journalist N. Niranjan Nikam moderated this session.

A session on “Literary Panel: Figments of Imagination” in which authors Mark Abbot, Sita Bhaskar, Sujata Rajpal, Dr. V. Srinivas participated talked about how they came to writing books and this session was moderated by another author  Lakshmi Palecanda.
Another children’s session called “Finding Clues of the past: Digging Deep” in which author Devika Cariappa shared her insights about the book with children had fun interacting with her.

On July 13, the first day of the festival, after the sessions ended there was presentation of ‘A Little Night Music’ presented by The Mysuru Literary Forum Charitable Trust and the South Asian Symphony Foundation at the Wind Chimes. The presenters were Dushyanthi Perera on the Cello and Soundarie David Rodrigo on the Piano (both from Sri Lanka) and Alaric Diniz on the Clarinet from India.

READ ALSO  I get upset by Bollywood copying my stories: Archer

The two-day festival saw a packed audience in almost all sessions and the credit should go to the organisers and the young student volunteers for pulling off a successful Lit Fest.