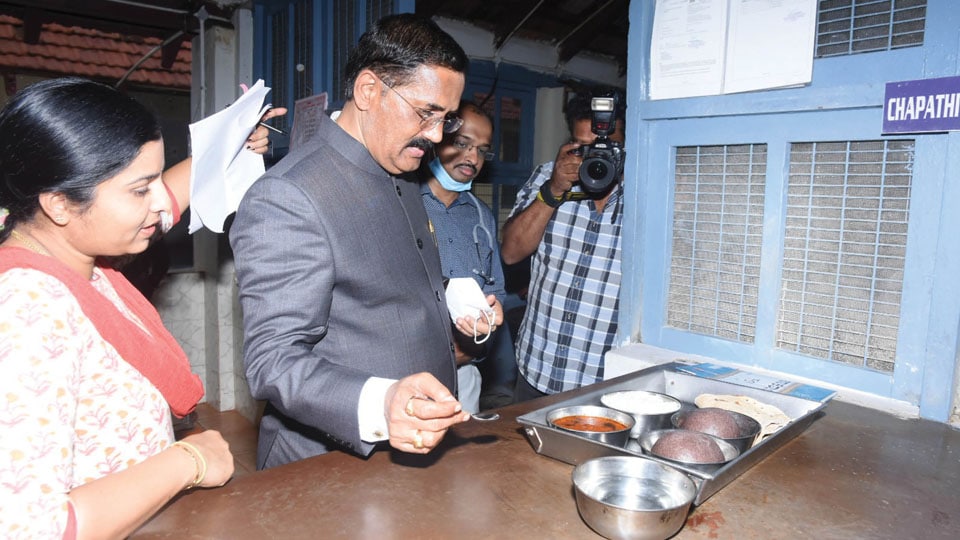 Mysore/Mysuru:  High Court Judge Justice B. Veerappa, who is also the Chairman of Karnataka Legal Services Authority (KLSA), paid a surprise visit to Mysuru Central Prison for an inspection yesterday.

Upon his arrival, the Judge went around the jail premises inspecting the Women Prisoners Section, Hospital Section, Tower Section, Kitchen, Store room, CCTV Control Room and other sections for about an hour and a half.

Justice Veerappa later sat on a stone bench at the Tower Section and received petitions from the prisoners.

The Judge who tasted food, gave some suggestions on making Sambar more tasty, after which he went near CCTV room  and asked the authorities to play  a song from Dr. Rajkumar starrer super hit movie ‘Gandhada Gudi’, with the help of a mike set.

Upon visiting the Hospital Section, Judge Veerappa saw repairs being done to the storm water drain, where he advised the prisoners doing masonry works, on doing the job in a proper manner. He himself held a ‘Karni’ and showed how the drain way must have a slope and how cement plastering should be done for it.

Later, Justice Veerappa interacted with the prisoners and questioned them about their jail terms. While one prisoner said he had landed in Jail as he does not have money for payment of alimony to his estranged wife, another convict said he is not getting parole even after spending five years in Jail.

When an under-trial sought permission for having food brought from his mother atleast once a week, the Judge replied that it cannot be done as this benefit must also be extended to all other prisoners. Another prisoner who is jailed for dacoity, told the Judge that he has not been able to get a bail even after two and half years.

Jail Superintendent K.C. Divyashree said that prisoners are not being let out on parole for more than six years now as the Police reports are not in favour. The parole applications of more than 50 long serving prisoners have been rejected more than three times, for want of positive Police reports, she added.

Meanwhile, in an interesting incident that took place at the Hospital Section, a prisoner asked the Judge whether he can ask for his identity. Responding calmly, Justice Veerappa introduced himself as the Chairman of KLSA. Justice Veerappa questioned the prisoner on the nature of his crime, when he said he was jailed in a minor case and he has failed to get bail even after six months. He also complained that he has so far not got acknowledgements for his complaints, to which the Judge said that he would look into the matter.

In another interesting incident, Justice Veerappa enquired about an Iraqi national prisoner. Upon learning that the Iraqi national had landed in Jail for illegal stay in India, he directed Jail Superintendent Divyashree to inform the matter to the concerned embassy. Divyashree said that all the documents pertaining to the Iraqi national could not be presented to the Court as they are in the room in which he stayed. Justice Veerappa advised her to get Court clearance and get the documents with the help of the jurisdictional Police and submit the same to the Court. Upon hearing the Judge’s suggestions, the Iraqi prisoner thanked Justice Veerappa with folded hands.

Later addressing the prisoners, Justice Veerappa said that such prisoners who cannot afford to engage Lawyers, can contact the KLSA for any legal help. Noting that he has advised the jail authorities to address issues concerning amenities, he said that the prisoners in need can contact the KLSA for legal help by applying through the Jail Superintendent. After receiving the request, the KLSA will depute a lawyer to pursue the case of the concerned prisoner, he said adding that such prisoners who have engaged lawyers on their own, have to get information about their bail pleas from the concerned lawyer itself. He further said that the prisoners can change their lawyers after getting an NOC, if they are not satisfied with their work.

Justice Veerappa also had a word of advice for the prisoners saying that they should visit the jail library and red books on great leaders and other personalities, which helps a lot in leading a transformed, disciplined and lawful life after walking out of the prison.

Later Justice Veerappa told presspersons that he made a surprise visit to Mysuru Central Jail to have a reality check after several complaints were received about quality of food and lack of other facilities. Pointing out that over 800 prisoners are housed here when the Jail has the sanctioned capacity of 562, he said  the Jail authorities told him that a new building is coming up to ease the pressure on the existing one. He further said that though Mysuru Jail was found lacking in certain facilities, it is far better than Kolar Jail.