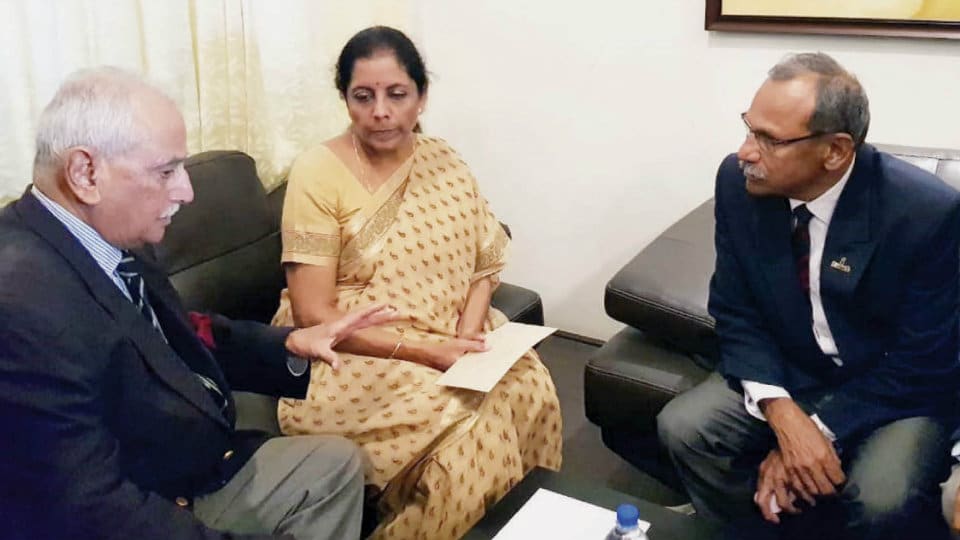 Talking to Retd. Army Officers on environment instead of discussing devastation

Madikeri: Defence Minister Nirmala Sitharaman visited the flood-affected Kodagu District recently and held a meeting with the environmentalists. However, this meeting led to a confrontation between her and the people’s representatives including District in-Charge Minister S.R. Mahesh, Legislators K.G. Bopaiah, Appachu Ranjan and  Sunil Subramani.

When the Minister and the Legislators demanded that Nirmala Sitharaman should immediately come to the officials’ meeting or else they would boycott it, MP Pratap Simha who was present was in turmoil. He told the Minster that the Legislators were waiting, she took umbrage and said that it was her duty to listen to the Retired Army Officers too.

After discussions with the Retired Army Officers, the Defence Minister got ready to meet the Army Men present there. At the moment, District in-Charge Minister Mahesh humbly told her that the officials had been waiting for a long time and she should first come to their meeting.

A completely upset Nirmala Sitharaman said, “I am following the schedule. You have a list of minute-to-minute for me to follow. Then I will do it as per your schedule.”

Meanwhile, the elected representatives wondered why she had skipped the meeting of the relief work undertaken by the officials and came to the one with the environmentalists.

Bopaiah at this time retorted, “You do as you please.” The Defence Minister almost rebuking him said, “I am the Central Defence Minister. You want me to listen to what you say. Come let us hold the meeting then.”

Completely upset with the turn of events, she even looked indifferently at the power point presentation made by Kodagu Deputy Commissioner P.I. Sreevidya. At one stage when the question arose as to   who has to speak first, she told the District in-Charge Minister in an angry tone, “You first decide among yourself who should speak first after sorting out the differences.”

Nirmala Sitharaman, who did not speak much, ended the meeting in a huff.