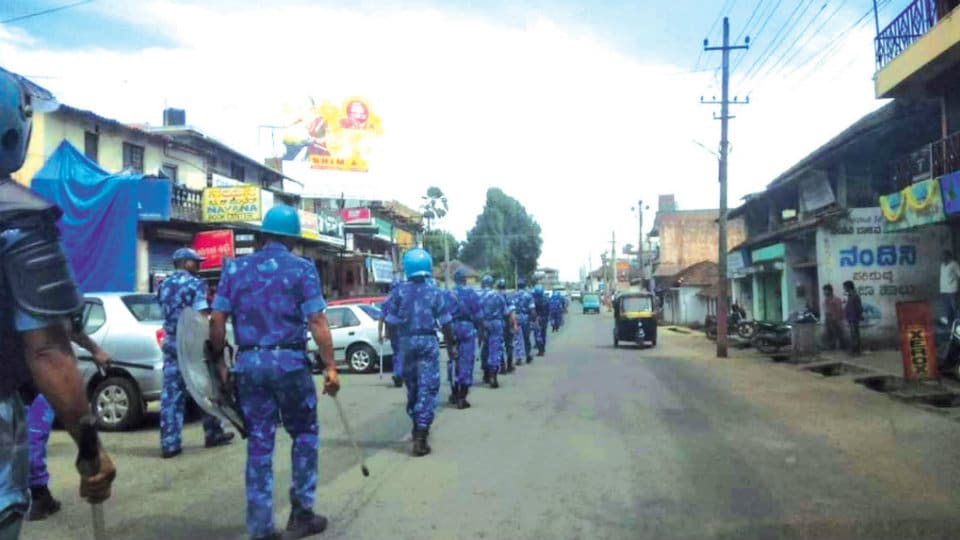 Police personnel from different parts of the State have already been deployed at sensitive places in Kodagu and a Rapid Action Force (RAF) team took out a flag march yesterday at many places including Virajpet.

The Police have already warned of initiating legal action against any attempt to disrupt peace. Notices have been issued to several people who have opposed the celebrations and they were asked to appear before Somwarpet, Virajpet and Madikeri Tahsildars and warned against disrupting peace. As a precautionary measure, the Police have collected letters of undertaking from potential miscreants.

It may be recalled that Tipu Jayanti celebrations in Kodagu district had turned violent on Nov. 10, 2015, in which two people had lost their lives. There was stiff opposition to Tipu Jayanti in 2016 and 2017 as well.

On its part, the District Administration will organise a Tipu Jayanti in Old Fort Hall and the entry to the programme is by invitation only. CCTV cameras have been installed at sensitive places.

Ban orders have been imposed as per Section 144, 144(a) and as per Karnataka Police Act 1964 Column 35 from the evening of Nov. 9 (today) till 6 am on Nov. 11 to prevent any untoward incidents. Apart from pre-designated events like marriages, house warming ceremonies and naming ceremonies, no other public or political functions must be organised. Processions have been curbed and public display of religious flags has been banned.

It will be only an official celebration in Kodagu and no association has been given permission to observe the event.

Mounting of flexes, banners and posters on Tipu Jayanti is also banned. Apart from the members of security machinery, no one else is authorised to display weapons or carry them in public places.

To prevent anti-social elements from neighbouring Kerala from indulging in violence in Kodagu like it happened in Kodagu in 2015, a team of senior Police officers conducted inspections in Kannur and Kasaragod check-posts in Kerala. IGP (Southern Range) K.V. Sharath Chandra is also monitoring security measures.

Sale of liquor has been banned from midnight of Nov. 8 till 8 am on Nov. 11 as per Karnataka Excise Act 1965. Clubs, bars and restaurants have been directed not to serve liquor during ban period.

Kodagu Superintendent of Police Suman D. Pennekar said that a special team of Police had been engaged to collect information on those conspiring to disrupt celebrations. As many as 10 check posts have been set up at places where the district shared borders with Kannur, Wayanad, Kasargodu, Hassan, Dakshina Kannada and Mysuru.

Vehicles plying in and out of the district were also being inspected. “Additional Police personnel including an Additional SP, six Dy.SPs, 20 Inspectors, 46 Sub-Inspectors, 104 ASIs, 850 constables, 21 DAR platoons, 10 KSRP platoons and 300 home guards will be on duty, apart from the RAF team,” the officer stated.

As many as 75 Police vehicles will patrol the district round-the-clock. Seven Rapid Response teams from the Forest Department were also deployed. The government had issued orders and deployed special executive magistrates to ensure maintenance of law and order.