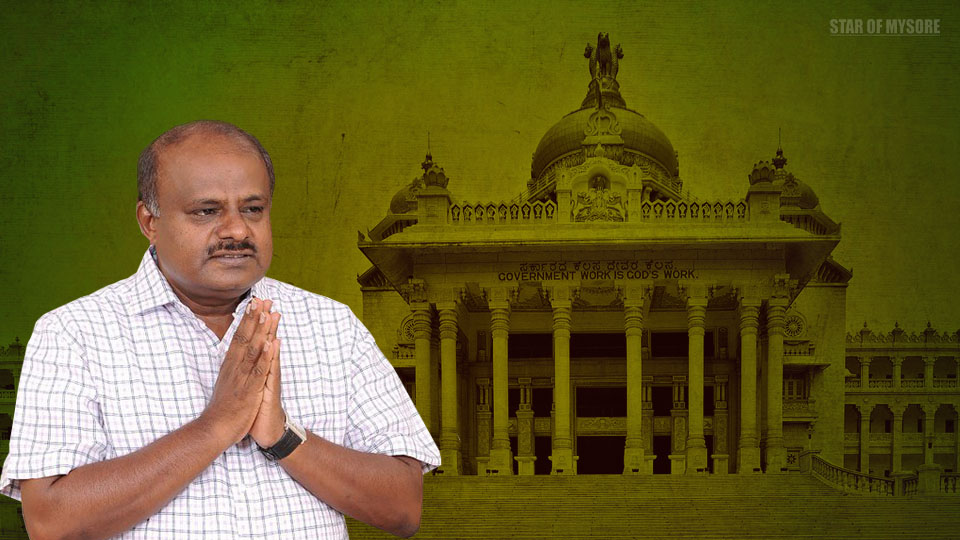 In the midst of the “Snake and Ladder” game being played between Karnataka Congress and JD(S), the beloved son of H.D. Deve Gowda, the JD(S) Supremo, H.D. Kumaraswamy, would be crowned as the 25th Chief Minister of Karnataka to herald the ‘Era of Kumara’ — Kumara Parva — this evening.

With an unshakable belief that his son is unlike the sons of others, H.D. Deve Gowda has invited all the political giants from all corners of this vast country and is in a hurry to see the coronation of his son in their august presence.

Whatever the ecstasy of Deve Gowda, the shadow of fear about the possible future political turbulence is perceptible as we see the political demands, bargaining and even bickerings between the Congress and the JD(S) since the day the coalition was forged.

In this politically polluted atmosphere, despite this being a coalition Government, the JD(S) Supremo had issued a stern direction that this evening only his son Kumaranna would take oath. And like an obedient son Kumaraswamy agreed.

However, at the last moment the Congress has decided to allow G. Parameshwara to take oath, along with Kumaraswamy, as the Deputy Chief Minister. Surprisingly, Deve Gowda could not object.

Deve Gowda thought if his son took the oath alone, he would shine like the sparkling star among the distinguished national leaders whom he had invited. In the meanwhile, if many took oath as Ministers along with Kumaraswamy, it might result in bad omen leading to the displeasure of many Ministerial aspirants and worse, leading to great difficulty in proving the majority in the Assembly. This was Deve Gowda’s fear.

It is natural for any father to seek the success and glory of his son. It is pointless to find fault in this kind of parental sentiment. However, the bitter truth is the inevitability for the Congress party, with a history of 130 years, to capture power in Karnataka at any cost, by any means and even by hook or crook.

Congress appears worried about losing power in State after State. Of the 30 States, it has power only in Punjab, Pondicherry and a few as partners. Now its dream of winning this election to save Karnataka for itself has also failed.  Therefore, keeping in view the ensuing 2019 Lok Sabha election, Congress thinks it would be to its electoral advantage to keep party’s presence in the power-corridor of Karnataka, hence this unholy or self-deprecating alliance with JD(S) with much less number of MLAs than itself.

READ ALSO  Brijesh Kalappa questions why he was denied ticket

Therefore, the Congress High Command has meekly surrendered to JD(S) offering party’s unconditional support and making its MLAs prostrate before Deve Gowda in a most helpless, humbling manner saying, “Mr. Deve Gowda, do whatever you like with them.”

For Congress, forming this coalition Government in Karnataka is like getting oxygen. In the likely event of being swept away from power in the face of Modi-Shah tsunami, the present coalition with JD(S) is like a life-jacket that a drowning person clutches on!

“Let us first make use of the best opportunity we have to save ourselves by joining JD(S) Government, we will decide the future later” seems to be the thinking of the Congress party.

The thinking of the Congress High Command might have also run on these lines — ‘Suppose no coalition is made with JD(S) and then the JD(S) forms the Government with the help of BJP, where would Congress be in Karnataka? As it is, there is an on-going plan to form a Third Front by all regional and other opposition parties to put a brake to Modi-Shah Juggernaut.’ This might be the scheming of AICC former President Sonia Gandhi and the present President Rahul Gandhi.

The Congress party is in such a pathetic situation in Karnataka today, it seems to hold the view, no matter whatever condition JD(S) puts forward, it is in a hurry to put JD(S) in the seat of power in Karnataka. Congress High Command has asked State Congressmen not to go to Delhi till the coalition Government passes the trust vote, for fear of something going wrong. Which was why HDK went to Delhi alone and met Sonia and Rahul Gandhi.

It is the law of nature that the minority would always support the majority. Like a weak person kowtowing to a strong person. But here the Congress with a majority of 78 MLAs has in a servile manner surrendered to JD(S) with a mere 37 MLAs. This has angered many Congress MLAs. But it is not possible for them to express their disappointment. They consider JD(S) as the usurper of power, but afraid to express their opinion before the Congress High Command. It could be that these enraged MLAs do not want to hurt the mother and son who are already hurt and hence surrendered themselves to absolute silence.

Hereafter, there would be two High Commands for the State Congress — At Delhi Mother-son and in the State Father-son.

This evening these Congress MLAs might be witness to the oath-taking ceremony in an atmosphere of humiliation like the prisoners of war, but when will they be released from the confinement of 5-Star hotels? It is to be seen if this “imprisonment” would continue for another 24 hours till the trust-vote is taken.

Compliments to D.K. Shivakumar, the Congress honcho, who despite difficulties, displaying warrior-like quality, this time too has succeeded in keeping the 78 MLAs in ‘safe custody’ to prevent possible horse-trading and poaching. But should he be kept out of the Ministry under the pretext of there being a CBI inquiry against him, there is a danger of him revolting. He is not the one to keep quiet whenever his self-esteem is hurt or questioned.

Now, imagine the feeling and the mindset of Siddharamaiah who for the last five years ruled Karnataka in an autocratic manner like a despotic king. On the one hand, the pain of facing defeat in front of the father and son — H.D. Deve Gowda and H.D. Kumaraswamy. On the other hand, he is unable to digest the humiliating decision of the High Command and worse being pushed to a dark corner. These are ‘tall people’. VIPs. Because it is raining outside, Congress invited JD(S) to its tent. But like the proverbial Arab and the Camel story, what happens if JD(S) nudges out Congress from its tent, Karnataka, for good in this political rivalry? There is a lingering fear of this kind in Congress High Command as this coalition Government is formed.

Thus, there is absolutely no doubt that in this coalition Government the total advantage is for JD(S) and total loss is for Congress. Being a National Party, Congress should have taken on another National Party BJP head-on. Instead, it seems to have committed a political harakiri in Karnataka.

Incidentally, the conduct of some senior State IAS and IPS Officers who had gone to H.D. Deve Gowda’s house to offer respect by ‘kneeling’ before him seems reprehensible indeed; that too even before his son had taken oath as Chief Minister. Was it necessary to seek his guidance? What kind of culture is this? Is this not a  sign of slavery?

[Translated from Kannada by K.B. Ganapathy]