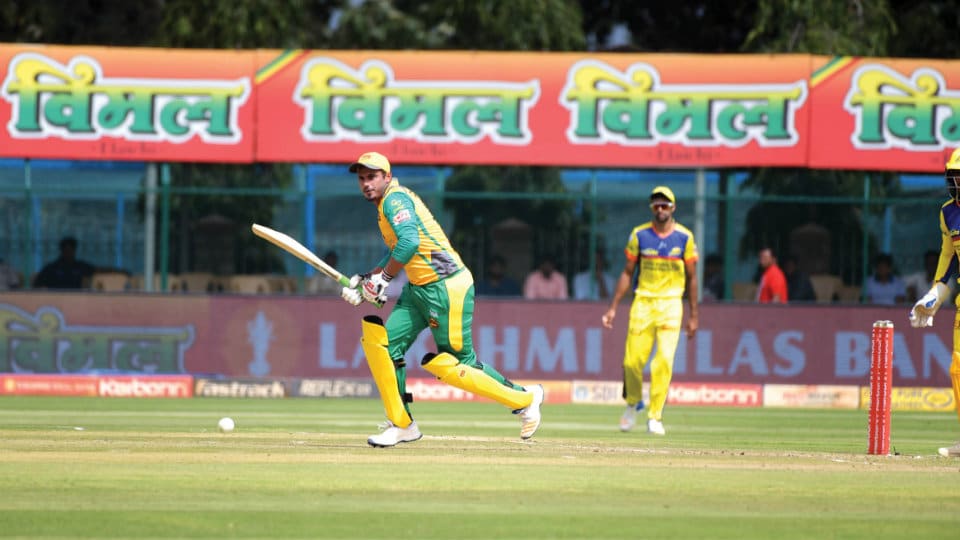 Mysuru Warriors won the toss and put the opposition into bat on a hot sunny noon. Opener Bharath Chipli, the skipper of Bijapur Bulls, who was dropped in the second over at point by Shoaib Manager, went on to score 63. Chipli 63 (53b,6×4,3×6) led the attack from the front along with Mir Kaunian Abbas (42) after the Bulls had lost two wickets  for 22 runs at the end of 3 overs.

The Warriors kept picking wickets at regular intervals and kept a constant check on the run rate of Bijapur Bulls. But a late assault in the end hurt the Warriors. Suneel Raju (28) and KL Shrijith (17) shared a partnership of 44 runs from 23 balls for the sixth wicket. The Bijapur Bulls posted a score of 167 for 6 in five overs.

In reply, the Mysuru Warriors raced to 43 runs in 4.3 overs. Openers Rajoo Bhatkal (29) and Arjun Hoysala (21) failed to convert their start into a big score. The introduction of K.C. Cariappa (2 for 23) saw the dismissal of Arjun Hoysala. Soon, Amit Verma was also dismissed by Zahoor Farooqui, who was caught brilliantly by Bharath. With the fall of wickets, the pressure kept increasing as the run rate sky rocketed. Bijapur Bulls were inconsistent in their line of bowling, and gave away 18 wides in their innings. With 48 runs needed of the last 5 overs, Skipper J. Suchith’s (34 n.o.) effort went in vain as the Warriors fell short. With seven required of the last ball, Suchith needed to hit a six to tie the scores. He managed to a boundary through extra cover and the Warriors lost the game by two runs. The Mysuru Warriors finished at 165 for 5 in 20 overs.

Hubli Tigers stormed into the semi finals of the KPL as the defeated Belagavi Panthers by 44 runs in the KPL encounter at SDNR Wadiyar Stadium in city yesterday. Having put into bat by Stuart Binny, Hubli Tigers found themselves staring themselves at another top order collapse as they were reduced to 33 for 3 inside 4 overs.

Opener Abhishek Reddy (74) and Praveen Dubey (40) held their nerve and changed fortunes for the Tigers. They shared a fourth wicket partnership of 100 runs off 69 balls. Abhishek Reddy 74 (37b,8×4,3×6) played a stroke filled knock and sent a sense of concern in the opposition’s camp. Praveen Duby played a gritty knock of 40 from 44 balls. Captain Vinay Kumar (21 n.o.) and M.B. Darshan (18) gave the finishing touch as Hubli Tigers posted a score of 182 for 5 in their 20 overs.

In reply, Belagavi Panthers got off to a horrific start as they were reduced to 46 for 5 within the Powerplay quota of 6 overs.

Vinay Kumar (4 for 19) was clinical with his line and length and caused trouble to the batsmen of Belagavi Panthers.He bagged a wicket in each of his overs. The Panthers, who had to win this match to stay in the hunt for making it to the semi finals collapsed and never looked like chasing down the target. During the match, Vinay Kumar also became the first player to score an aggregate of 1000 runs and also go past the 50-wicket mark in KPL.

With this result, Hubli Tigers secure their position in top two in the points table. Also the loss of the defending champions Belagavi Panthers, meant that irrespective of the results of today’s matches, Mysuru Warriors and Bijapur Bulls will be in the semi-finals along with Hubli Tigers  and Bengaluru Blasters. Today’s results will only alter their positions in the top four.