KPL 2018: It was Binny’s Day Out as Belagavi Panthers beat Bellary Tuskers

Mysuru: An all-round performance from Stuart Binny (31 runs and two for 27) propelled Belagavi Panthers to a 22-run triumph over Bellary Tuskers in the Karnataka Premier League (KPL)-2018 tie played at the SDNR Wadiyar Stadium in city yesterday.

After being put into bat by the Bellary Tuskers, Belagavi Panthers got off to a nervous start as Opener Dikshanshu Negi was runout on the first ball. Stalin Hoover and D. Avinash held their nerves and managed to take the team to a decent position.

Belagavi Panthers eventually managed to post a total of 157 for seven in 20 overs with useful contributions from Stalin Hoover (38), D. Avinash (25) and Stuart Binny (31). T. Pradeep (two for 28) and RiteshBhatkal( 2 for 19) were the best performers in the bowling department of the Bellary Tuskers. With the wicket being a mystery, Binny had to curb his natural aggressive style of batting and played a gritty knock of 31 off 34 balls.

In reply, Bellary Tuskers were restricted for 135 all-out in 18.5 overs. With a competitive total on the cards, Bellary Tuskers got off to a great start. Opener Codanda Karthik smashed 31 of just 11 deliveries. But his innings came to an end with an inspirational spell of bowling from Niyaz Nisar (2 for 23). It seemed as though the partnership between CM Gautam (24) and DevduttPadikkal (23) would take the game away from the Panthers. But the bowlers of Belagavi Panthers brought the game back in their favour, as S. Prashanth gave a vital breakthrough by dismissing Devdutt Padikkal. Stuart Binny also piled up the pressure on the Bellary Tuskers’ run rate with his decent spell of bowling. D. Avinash(3 for 20) winded up the lower order of Bellary Tuskers.

Binny also took an unbelievable catch of a shot hit by T. Pradeep which seems to sail over the ropes. Binny ran from the deep midwicket to his left, leapt and stuck his left hand in the air and pulled off a stunner.

A flamboyant innings from Abhishek Bhat (40) along with crucial contributions from Pavan Deshpande (34) and Bharath Devaraj (38), helped Bengaluru Blasters beat Shivamogga Lions by 2 wickets in the KPL-2018 tie played at the SDNR Wadiyar Stadium in the later half of the evening yesterday. 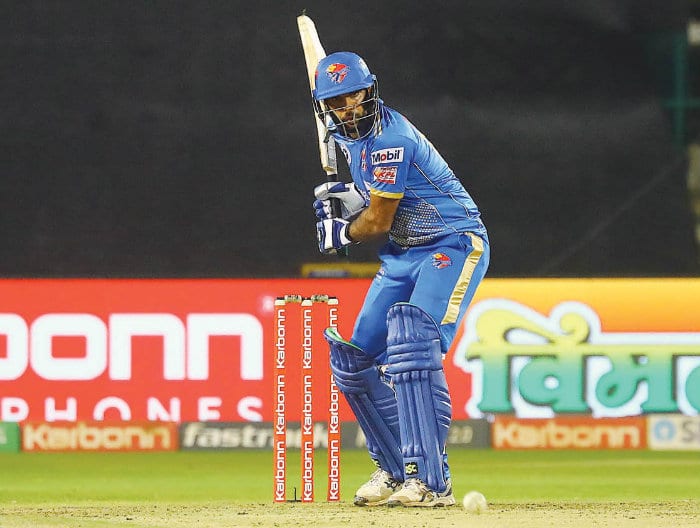 Earlier, Robin Uthappa, the Skipper of Bengaluru Blaster, won the toss and put the lions into bat. Opener Liyan Khan fell early as he was caught off guard by the medium pace of Abhishek Bhat (one for 16 in two overs). Nishal Ulla 34 (30b, 3×4, 1×6) and K Rohit 36 (29b, 3×4, 1×6) steadied the ship for Shivamogga. Then a lower order partnership between Rongsen Jonathan (37) and Aniruddha Joshi (28) took the lions to a competitive total of 146 runs. Arshdeep Sing Brar picked up two wickets of the only over he bowled (two for 7).

In their chase, Bengaluru Blasters got off to a very poor start. Skipper Robin Uthappa, who was the major attraction for the fans was dismissed off the first ball he faced as he was caught at third man by Abilash Shetty off the bowling of Aditya Somanna. Bengaluru Blasters slumped to 46 for 5 in 6.3 overs. Pavan Deshpande (34) and Bharath Devaraj (38) kept the hopes alive for the Blasters. But their dismissals brought a sense of fear in the dugout of the Blasters. But Abhishek Bhat 40 (19b, 3×4, 3×6) was calm under pressure and with his explosive shots took the game away from the Lions. Aditya Somanna (three for 34) was the top bowler for the Lions.

READ ALSO  Mysuru all set to host KPL from tomorrow

The matches will be streamed live at Hotstar.com

Tickets available at: Insider.in and Paytm.