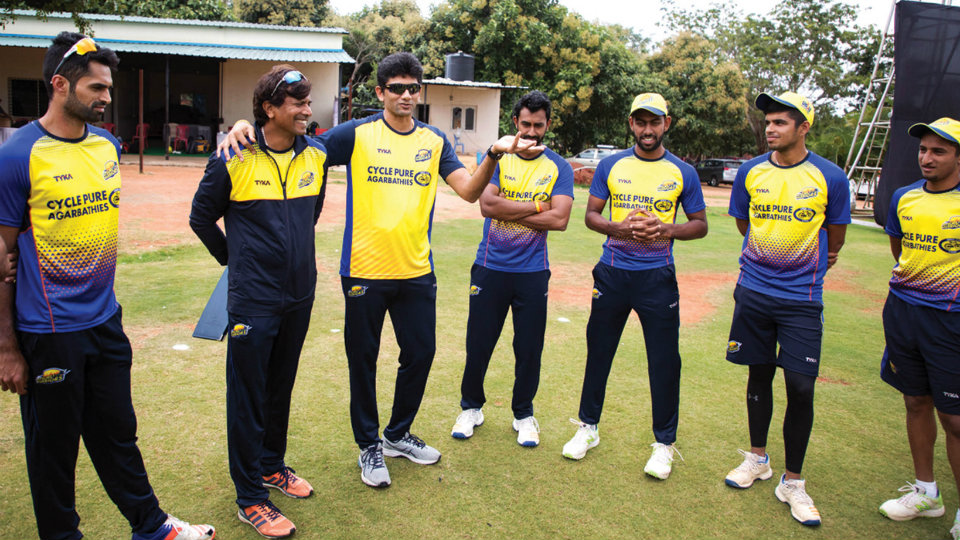 The Royal City is all geared up for the most-awaited cricket tournament of the State — Karnataka Premier League (KPL)  — which promises entertainment, action and a complete professional brand of cricket. Cricket is not just a game, it is an emotion.

This Weekend Star Supplement showcases Team Mysuru Warriors who will unite the cricketing buffs with the cometh of the Seventh Edition of KPL into the Heritage City. And the Warriors are sure to take the city by storm from tomorrow at SDNR Wadiyar Stadium in Manasagangothri.

Cricket is one such sport that unites the country as a whole. With KPL gaining popularity and fan base over the years, cricket is definitely running into the roots of Mysureans, thanks to Mysuru Warriors.  But leagues like KPL provide the right kind of exposure and environment to youngsters to dream of making it to the next stage and in the long run make it to the Indian cricket team. Their skills and potentials are identified through this platform and they gain recognition.

The Seventh Edition of Karnataka Premier League (KPL) is underway and the tournament will be played in Mysuru from this afternoon  (Aug. 25). Earlier, it was scheduled to begin in the royal city from Aug. 28. However, with Hubballi leg matches shifting to Mysuru following inclement weather conditions there, Mysuru cricket enthusiasts will get to watch additional matches including the Finals at SDNR Wadiyar Stadium in Manasagangothri on Sept.6.

Mysuru Warriors, with a blend of youngsters and experienced players, will be hoping to make SDNR Wadiyar Stadium their fortress this season and repeat the heroics of their First Edition in KPL where they emerged as Champions in 2014. The Warriors, clad in bright yellow armour, will be led by J. Suchith, who has been a part of the team since 2014. With an added advantage of the last leg of the tournament being played in Mysuru, the team will be backed by the home crowd, as the yellow sea will fill the stands of the stadium and root for the boys in yellow.

Ahead of the tournament, Star of Mysore caught up with the Mysuru Warriors Owner, Mentor, Coach and Captain for a brief chat. Now read on…

T-20 is the way to go: Mentor Venkatesh Prasad

With former Indian Cricketer Venkatesh Prasad being roped in as their Team Mentor, Mysuru Warriors will be eager to learn the skills and knowledge about the game from him.

Venkatesh Prasad, who was an integral part of India’s new ball attack, was well-known for his ability to swing the ball both ways and make life difficult for the batsman. His presence in the dressing room will be a great opportunity for the youngsters to absorb his experience and knowledge. 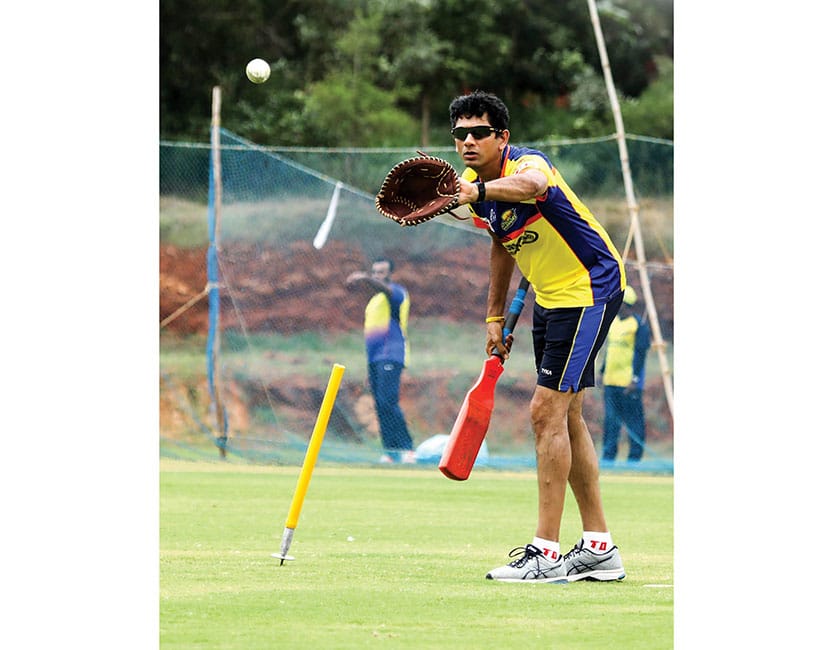 Speaking to Star of Mysore, Venkatesh Prasad or ‘Venky’ as he was fondly known says, “Mysuru is an amazing city. My father is from Mysuru and I have relatives here. So, I definitely have a certain connect to the city. It’s good to be working with Mysuru Warriors as they are extremely professional. Their work ethics is fantastic and the whole family is behind the team. This team has been the champions once and it is an honour for me to be associated with them.”

“The team is very talented and has an excellent support staff led by Coach RX Murali. My job becomes simpler. I try to bring my experience which I have gained over the years as a player, administrator, selector, coach of the Indian team and pass it on to the youngsters. In future, a few guys from Mysuru Warriors may play for the IPL teams and even the Indian team. So, it is important to guide them. That is what I’m trying to do. My sharing of experience does not limit to the players alone, it also extends to the coaching staff on how to handle things, get a player in good space for him to perform etc.” The Warriors indulge in a light warm up session with their Mentor Venky.

On being asked about KPL being a platform to nurture local talent, he says, “It is very good. Now T-20 is the way to go. But I would definitely like to see a lot of them not just play the shorter format, but also learn from it, improve their game and escalate the skills into the longer format. For me the real cricket is the longer format — 3-day game, 4-day game or a 5-day game. But KPL is definitely a good platform, because with this sort of format (T-20), there is so much of franchise that a lot of players are getting opportunities. From here players can be groomed and nurtured, who can play well for the State.

All in all, we are a complete team: Coach RX Murali

RX Murali, Coach of Mysuru Warriors, says, “This year, the team looks complete in all perspectives compared to last year. We have a good unit covering the bowling, batting and fielding departments. We have good openers too. All in all, we are a complete team. KPL is the best thing to happen to Karnataka cricket. It is a great opportunity for young cricketers who dream of playing a bigger grade of cricket, which they get it through KPL.”

“The intensity of the game, the pressure involved, the situations aid the players and mould them into better players as they assimilate how to handle things. They become more proficient and competent. Yes, it is true that we do not have a star player like we had Karun Nair last year and Manish Pandey a few years ago; but this young team has the potential. And also, most of the star players like them aren’t available as they are busy with national duties and a few are representing India A-Team.” 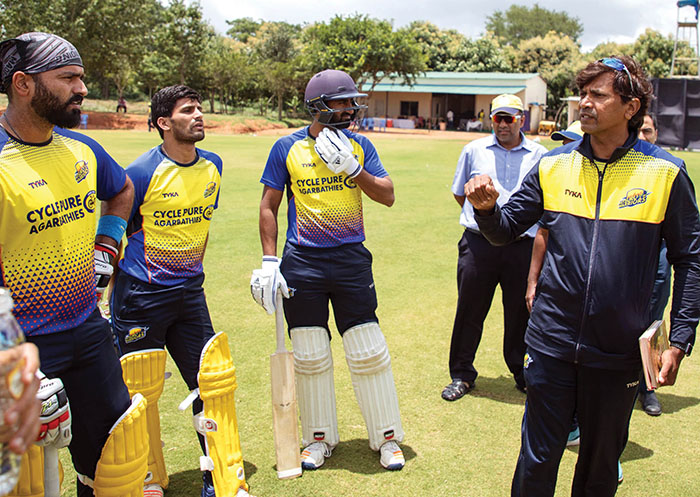 Coach RX Murali in discussion with the boys.

On being asked about bidding for Amit Verma for a huge sum of Rs.7.6 lakh, Coach Murali said, “Amit Verma is a multi-dimensional player. We were really adamant in the auctions to get him on-board. He adds three perspectives into the team — he is a leg-spinner, a proper T20 batsman and also a left-handed batsman. Leg spinners are the biggest commodity to any team. They are most effective, especially in T20s and Amit Verma will fulfil that role too. And having a left-handed batsman in the top order is an added advantage. When we won the KPL Trophy in 2014, Amit Verma was an integral part of our success story. He understands the value and culture of Mysuru Warriors.” 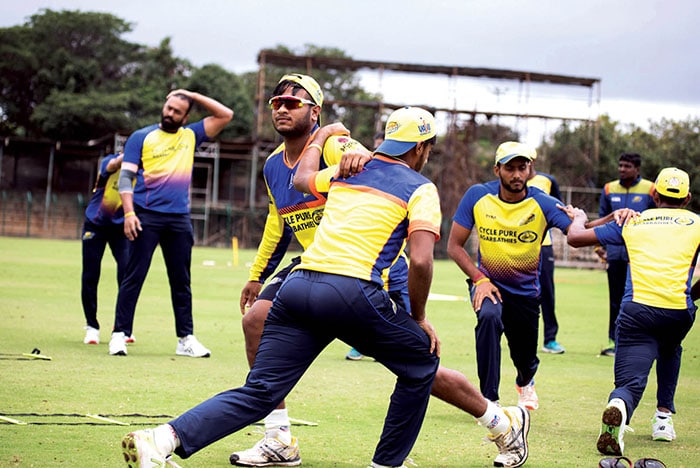 Fitness is the key: The boys are stretching their muscles in a fitness drill.

Speaking about Cycle Pure Agarbathies’ constant contribution towards sports and its promotion, Arjun Ranga, Owner of Mysuru Warriors and Managing Director of Cycle Pure Agarbathies, said, “We like to do activities that unite the nation. Cricket definitely is a sport that unites India. Mysuru Warriors is an emotion and a team for the city. Being born and brought up here in Mysuru, I want to nurture talents in the city. Through this team, the city unites in cricket.” 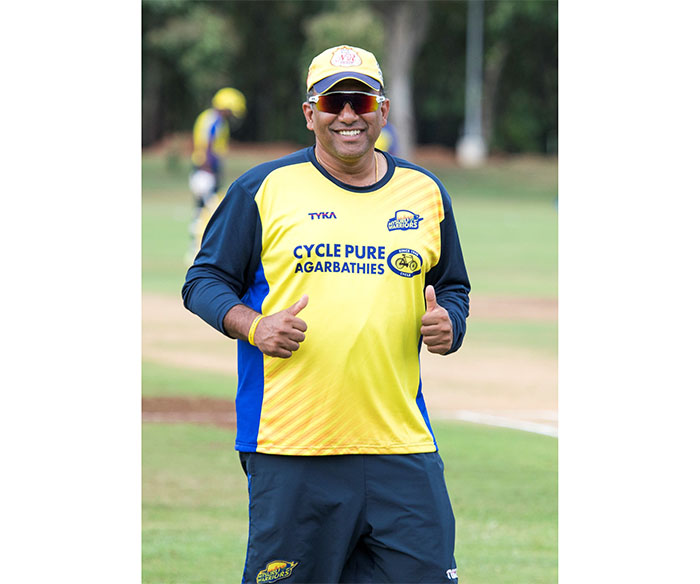 He adds, “The Talent Hunt is a KSCA (Karnataka State Cricket Association) initiative. They have made it mandatory for every team to have two people from the local catchment area. The catchment areas for us were Mysuru, Mandya, Chamarajanagar and Kodagu. We conduct two Talent Hunt programmes every year for recognising and developing talent. KPL is a great platform of exposure for the players. They are introduced to white ball cricket, playing under lights and with fans watching all around and with the match being telecast on TV, the pressure is immense. Real champions emerge only when put under pressure. This is a mini IPL (Indian Premier League) for the State.”

‘I was waiting to come back to Mysuru Warriors’: Leg-spinner Amit Verma

With the team getting back the services of experienced Amit Verma, who also played a match-winning knock of 59 in their seven-wicket win over Bellary Tuskers in their opening match in this year’s KPL campaign in Hubballi, the Warriors team will aim to carry their form into the last leg of the tournament. 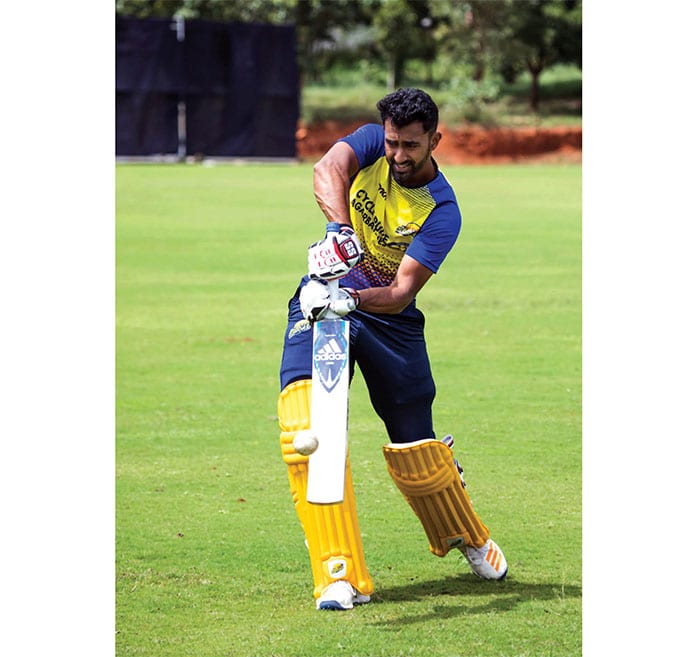 Amit Verma wielding the willow at a practice session.

Speaking to Star of Mysore, the leg-break bowler Amit Verma, said, “I’m happy to be back with Mysuru Warriors again. Arjun Sir and family have been very nice and kind to me. I was waiting to come back and play for Mysuru Warriors since 2014. Me and the team have been working really hard to win the Cup again. The team looks very solid with a nice blend of youngsters and seniors with good experience and a good support and coaching staff. We also enjoy the comfort of having all-rounders in our squad, who are very important in T-20 format. Their role is vital as they bat and bowl equally well and fill in the slots of two different roles. Leg-spinners play a huge impact in this brand of cricket. The 8 overs of leg-spin bowling between me and Kushal Wadhwani will be very crucial. Leg-spinners contain the batsmen, put brakes on the run rate and produce wickets.”

Jagadeesha Suchith, Captain, Mysuru Warriors, said, “The T20 format is quite challenging. The quality and brand of cricket has escalated. The knuckle balls, the back of the hand deliveries, the slow bouncers, yorkers and variations have all transformed the game completely. The batsmen have turned innovative to get runs. Many players who played KPL have now been recognised and roped into IPL too. It is the biggest platform to showcase talent. Karnataka cricketers are getting better every year. About 12 to 13 players from the domestic structure of Karnataka are now a part of IPL too. Our team has a lot of depth with good, experienced players. Most of them have been a part of KPL for more than 3 to 4 seasons. Each one has won crucial matches for their teams and some have also won the trophy. Their experience will come in handy at the later stage of the tournament.” 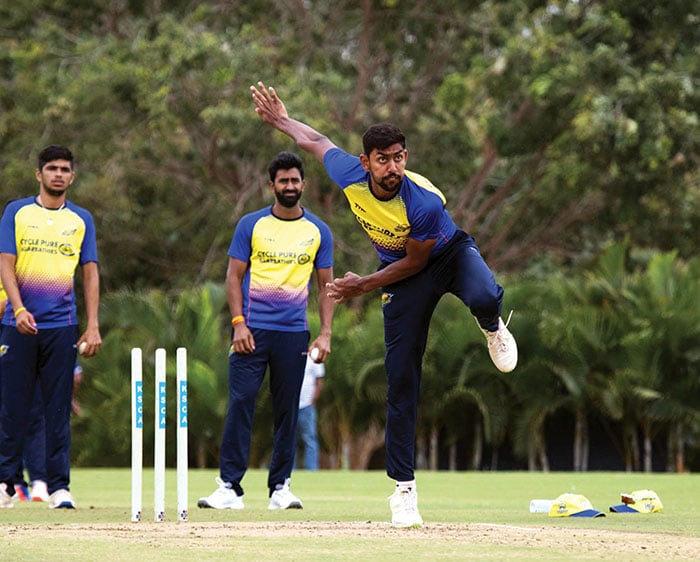 Suchith has been a part of Mysuru Warriors since the team became a part of KPL in 2014. Commenting on him being given the role of the Captain this season, Suchith says, “Being from Mysuru, it is a proud moment for me and it is a dream come true to lead my side. I would like to thank the management for having faith and belief in me and giving me the responsibility.”

Just like the Men in Yellow (Chennai Super Kings), who emerged Champions in this year’s IPL (Indian Premier League), the young Yellow Warriors from Mysuru Warriors will aim to make it big this season in KPL. Probably, the Royal City is going to be jumping in unison celebrating the yellow storm after the Battle Royale.