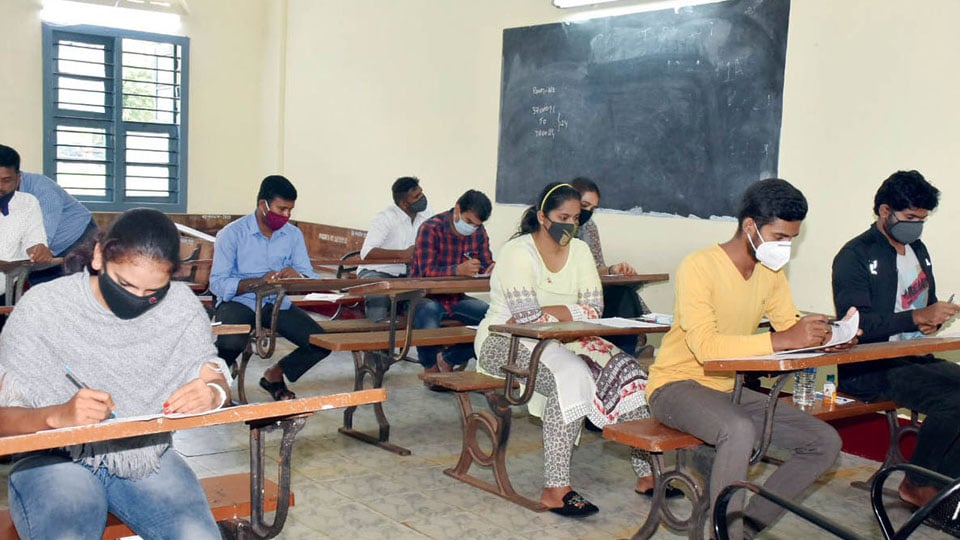 The KPSC (Karnataka Public Service Commission), which is conducting the exam, had invited applications on July 30, 2021 for appointment to a total of 990 Engineer vacancies in the Department. Thousands of  Civil Engineering Graduates  had applied for the posts (660 Assistant Engineer and 330 Junior Engineer posts).

The KPSC had allotted 6,737 candidates in a total of 35 centres in the city, out of which 4,489 candidates appeared today. The exam consists of General Knowledge, Technical Knowledge and Kannada Language Test papers, with each paper carrying 100 marks. Addl. DC Dr. B.S. Manjunathaswamy and officials from the KPSC Regional Centre at Mysuru visited the exam centres.

The exam was held under tight  security, with the City Police  clamping prohibitory orders in 200 mts radius around all the exam centres. Also, all photocopy shops in the vicinity of the centres were asked to shut down.

Meanwhile, candidates from Kodagu complained that they have been allotted centre at faraway Kalaburagi, thus depriving them opportunity. In a message, the candidates said that to their surprise, KPSC, which is conducting the exam, has assigned Kalaburagi centre for candidates from kodagu, who have to travel over 700 kms to write the exam.

Maintaining that there is neither rail connectivity nor direct bus facility to Kalaburagi from Kodagu district, they said that many of the candidates have decided to skip the exam. Contending that allotting a far off place as the exam centre has deprived eligible candidates of Kodagu  district from writing the exam, they urged the KPSC to explain the reason behind assigning such a far off centre to them.

However, several candidates from Mysuru too have been assigned far off centres such as Kalaburagi and Belagavi, while candidates from Northern districts of Karnataka have been assigned Mysuru centre. KPSC sources said that this has been done for conduct of the exam in a totally fair, just and trustworthy  manner, as there were complaints of irregularities and exam malpractices in the past.