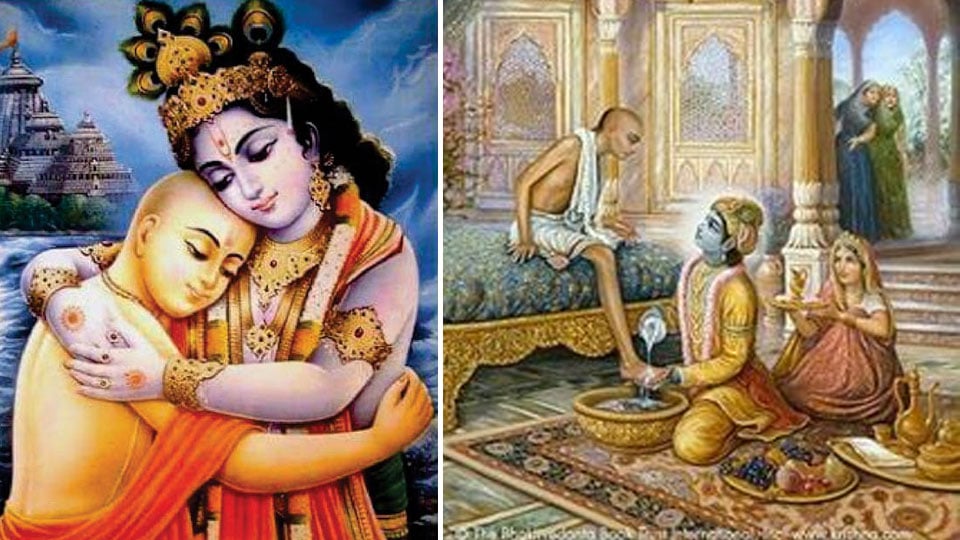 We have seen hundreds of people who are friends of kings, rich people, Maharajas, administrators and others. But we are not familiar with an ordinary person like Kuchela having friendship with Lord Sri Krishna, who is supposed to have flourished in Dwapara Yuga. Thus friendship transcends the boundaries of rich and poor, Gods and human beings and the like. The best example is the friendship between Kuchela and Sri Krishna. In fact, Kuchela’s original name was Sudama.

Krishna and Sudama were classmates and studied under  Guru Sandeepani. After their education, Sri Krishna returned to Mathura and was immersed in his social work, and administration of Yadunadu. On the other hand, Sudama returned to his village and was immersed in Vedic studies. In course of time, Sudama got married and had many children. Though he was a great Vedic Scholar, he was suffering from poverty of high order but was satisfied with whatever small amount he earned and never begged anybody for money. He did not have good clothes to wear and there was no money to prepare gruel and hence people began to call him Kuchela — a person with rags (chindi).

Fortunately, Kuchela’s wife was extremely good and followed the footsteps of her husband and everyone admired them by saying that they are made for each other. She was satisfied and happy with whatever her husband brought and her main aim was to rear their children by giving them good education and make them follow the dharmic path so that they can serve the society. Naturally what the husband had brought was not fully sufficient and she slept with no food on many days.

Unable to bear these difficulties and the poverty from which their entire family was suffering, she thought of a plan. She told her husband Kuchela, “you are a great friend of Lord Krishna and he will not say no to any help you may request; hence I request you to go to your dearest friend and ask for help. I have heard if one approaches Lord Krishna with true love, friendship and devotion, he will not disappoint them. However, you are his dearest friend and hence he will not refuse the request you make.’ Encouraged by this, immediately he decided and went to Dwaraka. However, his mind told him that he should not go to Lord Krishna with empty hands as it is against the usual practice and courtesy requires that he should carry something, however, trivial it may be. The problem still persisted because he did not know as to what he should offer to a dearest friend. He asked his wife for suggestion. She told him that the idea is excellent but we are so poor and I do not venture to suggest any gift to be given to Lord Krishna.

Finally both the husband and wife agreed that Kuchela should carry some quantity of avalakki (beaten rice). Nowadays this delicacy is becoming rare. However, it is being prepared and eaten in traditional homes as phalahara in place of cooked rice. He took this avalakki in his bag.

Kuchela began dreaming about meeting Lord Krishna at Dwaraka. He thought how to praise him with choices of epithets extolling his goodly qualities and his deeds which have helped thousands of people all over his kingdom and outside. He thought that his hands are the best in the world which have an opportunity of serving him and washing his feet, embracing him with his two hands. I am fortunate that I have this head which touches his holy feet and my ears are divine because I can hear Lord Krishna’s praise from not only human beings but even Gods and Goddesses. He also felt that his eyes are the best in the world which can look at this divine person.

Another problem came to him. All these are fine in theory but even the guards will not allow me into Krishna’s Palace. However, he made bold and entered Krishna’s Palace. He felt supremely happy that no guard or door-keeper stopped him and he felt that it is nothing but Lord Krishna’s grace. He sent word to Lord Krishna that his dearest friend Kuchela had arrived and waiting for a meeting.

As soon as Lord Krishna came to know about this, he welcomed him and took him to his personal living Palace. Krishna asked Kuchela as to what he has brought for him after enquiring about the welfare of Kuchela and his family. Krishna noticed that Kuchela was hiding a small packet and even without asking for it took it in his hands. He exclaimed that the packet contained avalakki which he liked. Immediately he took a handful of avalakki and put it into his mouth. It was so tasty that Krishna wanted to take some more avalakki. Noticing this his wife Rukmini prevented him from taking some more and she remarked that what he has taken so far is enough for this birth and also next many births.

Thus Kuchela spent fine time with Krishna and his family and with sadness took leave off Krishna and returned to this original agrahara. Never thinking of his poverty, Kuchela was thinking of the time he spent with Krishna, particularly his embrace and other courtesies shown to him. But he was sorry that Krishna did not give him any wealth, lands and other properties. But he consoled himself saying that Krishna should have done it deliberately so that Kuchela would not immerse himself in the pleasures of this world and forget the other more important world. With these thoughts he returned to his house and he was pleasantly surprised that a miracle had taken place. Krishna had ordered Viswakarma, the divine architect to rebuild Kuchela’s house into a luxurious one. He could not recognise his original house. Just for the sake of some avalakki, Krishna had given him property and felt that God only can give this and we are all beggars to receive it.

In spite of all these wealth, Kuchela did not indulge in worldly pleasures but immersed in the thought of Lord Krishna. Thus Kuchela set an example to all other human beings. Ultimately the grace of God is the final gift to every human being and we should aspire for it and it alone. Krishna taught this moral to all human beings through the example of Kuchela. Kuchela is thus blessed.