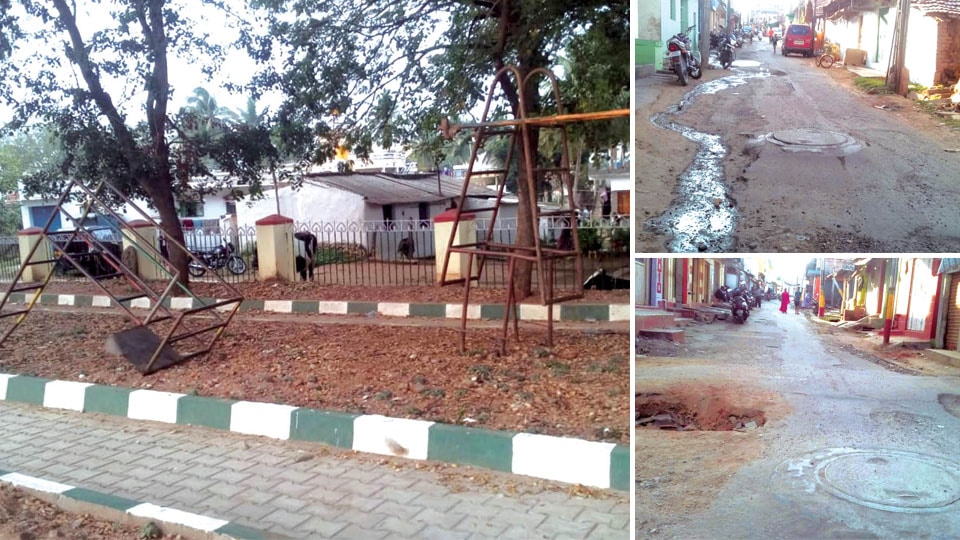 Mysuru:  Located amidst swanky buildings and various IT companies and factories, Kumbarakoppal paints a grim picture with the locality ridden with bad roads and an abysmally poor drainage system.

Battered roads, drainages, lack of streetlights and other basic amenities have left the residents fuming at the lack of action and commitment of elected representatives and Mysuru City Corporation (MCC) authorities.

This area which once had earned the reputation for efficient waste segregation and disposal of garbage in a scientific manner now lies in state of utter neglect without any sort of development. This area still looks like a village without any improvement.

Residents of the area complain that these civic problems have been haunting them for years now. Roads and by-lanes connecting Kumbarakoppal are in a worse shape.

For instance, the main road connecting Adishakthi Bannimaradamma Temple and Hebbal Surya Bakery Circle is riddled with potholes. Big craters on this road are posing danger to the lives of motorists. Though road widening is not possible on this congested stretch, it can at least be made pothole-free. The unscientific underground drainage work undertaken on the road has further worsened the situation. The manholes with overflowing sewage are death traps to motorists.

“It is ironic that while the arterial roads in the busy commercial streets are in a good shape, the internal roads in Kumbarakoppal, located in the middle of developed layouts are worse than those found in villages,” said residents living in the area since many years.

The roads connecting B.M. Shree Nagar, Brindavan Extension, KRS Main Road towards Hebbal Surya Bakery and Abhishek Circle around the layout are battered. Owing to bad condition of roads, traffic congestion has also worsened and those commuting through these roads are having a harrowing experience.

Every day, thousands of vehicles ply through this stretch leaving no space for pedestrians to walk. The houses located on the either side of these roads bear the brunt of dust. Overflowing sewage water from narrow and clogged drains and storm water drains mix with drinking water through supply pipes, allege the residents as they get smelly water at times. 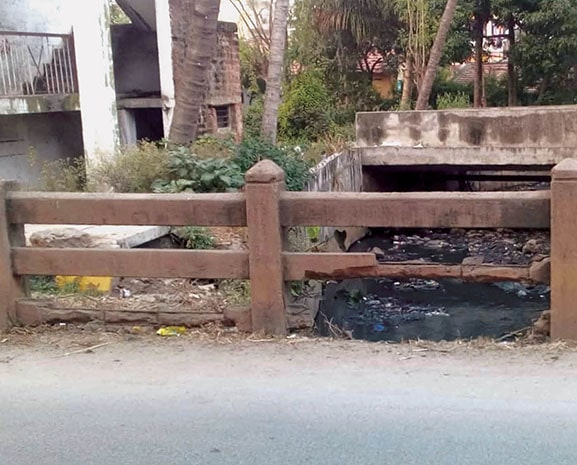 “Due to constant overflow of sewage water on the roads, we are unable to even walk around the colony for the past few months,” said residents. Even the roads surrounding Mahadeshwara Temple are also damaged by vehicular traffic. A large number of devotees flock the temple every year during Deepavali celebrations, but the roads connecting to the temple are in a pathetic state.

Stink welcomes you as soon you enter the premises. Many open areas are being used by the people to urinate and defecate. In addition to this, potholes are a major cause of nuisance. The garbage dumps and grazing stray cattle on it tell about the poor condition.

Expressing disgust at the situation of the locality, residents said that cleanliness has been a casualty here for the past many years and now the authorities have become more careless. “Leave aside infrastructure, at least cleanliness must be ensured,” they said. 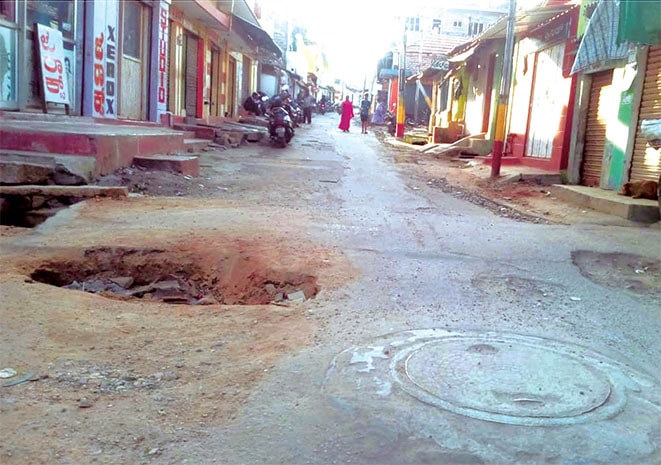 As there is no proper street light facilities, children, women and aged have to walk on the streets cautiously.  A bridge that is constructed across the storm water drain behind Adishakthi Bannimaradamma Temple is also in a pathetic state. Residents heading towards Kumbarakoppal must pass through this bridge only. A portion of the retaining wall of this bridge that was constructed to prevent people from falling down has also been damaged.  The long-pending demand of the residents for a new bridge has remained unfulfilled.

The park in front of the Bannimaradamma Temple is in a state of neglect. Residents are tethering their cattle on the compound wall grills of this park.  Meanwhile, residents of Kumbarakoppal are planning to launch agitations and they have threatened to boycott upcoming elections to register their protest.