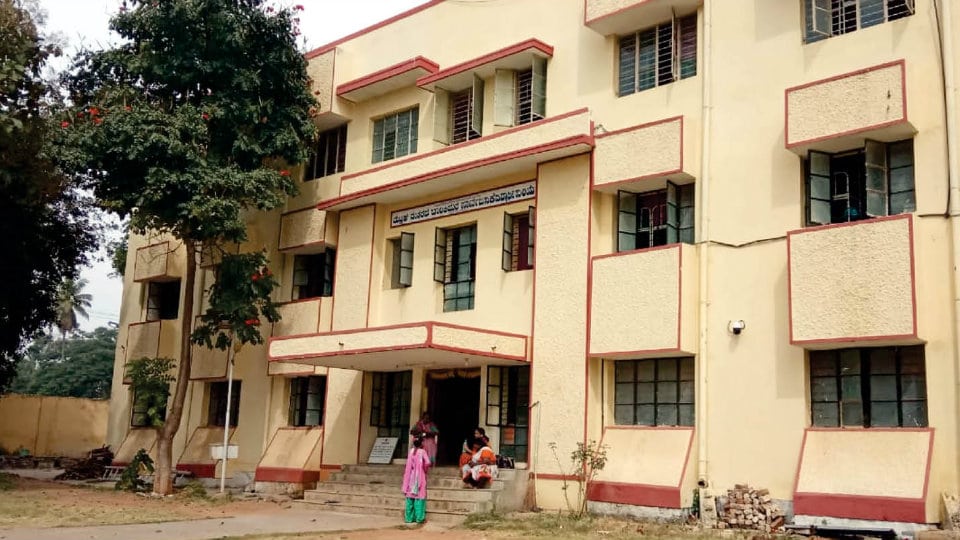 Mysuru: Two days after the fire incident which triggered stampede resulting in injuries to 48 students when they ran for safety after the fire broke out at UPS facility Room, the Government Post-Matric Students Hostel for Girls  at Vontikoppal now wears a deserted look. Almost all the 372 students have vacated the hostel and have left for their respective places and relatives’ place.

When Star of Mysore went around the hostel here this morning, it was found that the hostel was empty and most of the rooms of students at the hostel locked. The hostel premises wore a deserted look.

Except Hostel staff and Warden, no students were seen in the campus as the students are yet to recover from the shock. Worried parents had taken their children home after the fire incidents on  Saturday evening.

Meanwhile, all the 48 students who were injured and admitted at DRM Hospital and Brindavan Hospital were discharged last evening. They left for their  native places immediately.

Joint Director of Social Welfare Department Bindiya told Star of Mysore that the Department had got the UPS room where the fire broke due to short circuit, repaired. The damaged wires and other equipment were replaced.

She said that the Department has taken all safety measures and there was no need for the students to fear. They can return to the hostel, she added.

“As some students refused to stay in the hostel after the fire mishap, the department had shifted them to other hostels in city temporarily. As reported in some newspapers, not all students had vacated the hostel, but many of them were shifted to other hostels and some are staying in their relatives’ houses in city” Bindiya said.

She said that the students, who had left the hostel, would return to hostel within a week after recovering from the shock and injury. The Government had asked the Department to take private buildings on rental basis in city to shift the students who were in excess. The department has expedited this process of identifying private buildings to be taken on rent, she added.

Hostel Warden Kamakshamma, who fainted in front of District Minister G.T. Devegowda when he visited Brindavan Hospital to enquire the health of the injured students yesterday, was seen overseeing the hostel management this morning. She too said that the students would return to the hostel within a week.