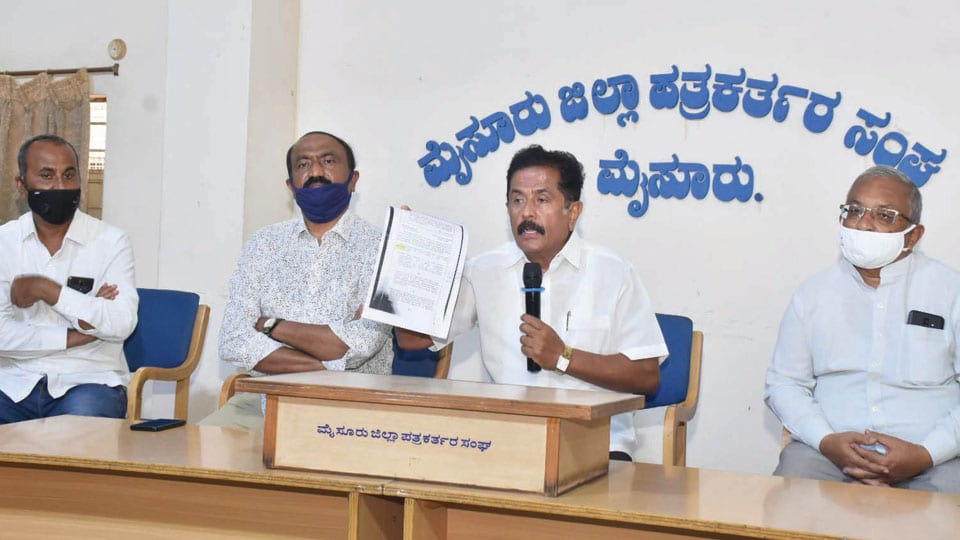 Mysore/Mysuru: Just two days after Revenue Minister R. Ashoka presented a Government order to Mysuru Deputy Commissioner on leaving out 354.29½ acres of land coming under Kurubarahalli Survey No.4 and Alanahalli Survey No.41, on which land the MUDA (formerly CITB) has formed Siddhartha Nagar, J.C. Nagar and K.C. Nagar, from B-Kharab classification (Government land), former MLA M.K. Somashekar has claimed that what the Revenue Minister has presented was only a ‘Government Letter’ and not an official ‘Government Order’.

Addressing a press meet at Pathrakarthara Bhavan here this morning, Somashekar accused Revenue Minister R. Ashoka of misleading the public by presenting only a ‘Government Letter’ and not a ‘Government Order’(GO) regarding leaving out the said land from B-Kharab classification.

Asserting that it is only a Government letter (dated July 14, 2020) written by the Under Secretary (C. Balaram) of the Revenue Department (Land Allocation-1), stating that a total of 354.29½ acres of land coming under Kurubarahalli Survey No.4 and Alanahalli Survey No.41 has been left out from B-Kharab classification and the Urban Development Department should take further action this regard,

Somashekar blamed the tussle between BJP MLA S.A. Ramdas and former MLC G. Madhusudhan of the same party as the reason for the classification of land as B-Kharab, which had pushed over 25,000 residents of the layouts to a lot of hardship.

Recalling his efforts to solve the row, Somashekar said he had taken great pains in persuading the then Chief Minister Siddharamaiah to find a permanent solution to the row, following which the Congress Government took a cabinet decision on March 3, 2018 to leave out the land from B-Kharab classification after bringing the same to the notice of the High Court.

READ ALSO  Ramdas stays away from all CM events

“I would have secured an official Government Order on the issue had the Assembly General elections not come in the way, which I lost. There is nothing for the current MLA Ramdas and other BJP leaders to take credit for it as they have done little to solve the long-lasting row,” he maintained.

He reiterated that Ashoka had only presented a Government Letter and not a Government Order (GO), which the people should understand. He further said that he would write to the Urban Development Minister Byrathi Basavaraj to get an unambiguous and clear Government Order (GO) on leaving out the said land from B-Kharab classification and also directing MUDA to take subsequent necessary measures for issuing land records pertaining to sites and other landed properties in the layouts and thus bring ‘real relief’ to residents.

Continuing his tirade on MLA Ramdas, the former MLA accused him of not bringing any funds for the development of the constituency. He further alleged that Ramdas was falsely claiming credit for all the development works and the projects he (Somashekar) had undertaken when he was the MLA. City Congress President R. Murthy, leaders H.A. Venkatesh and Sunil were present at the press meet.