Home » Columns » Abracadabra By K. B. Ganapathy » L.K. Advani: Was he cheated by Destiny? 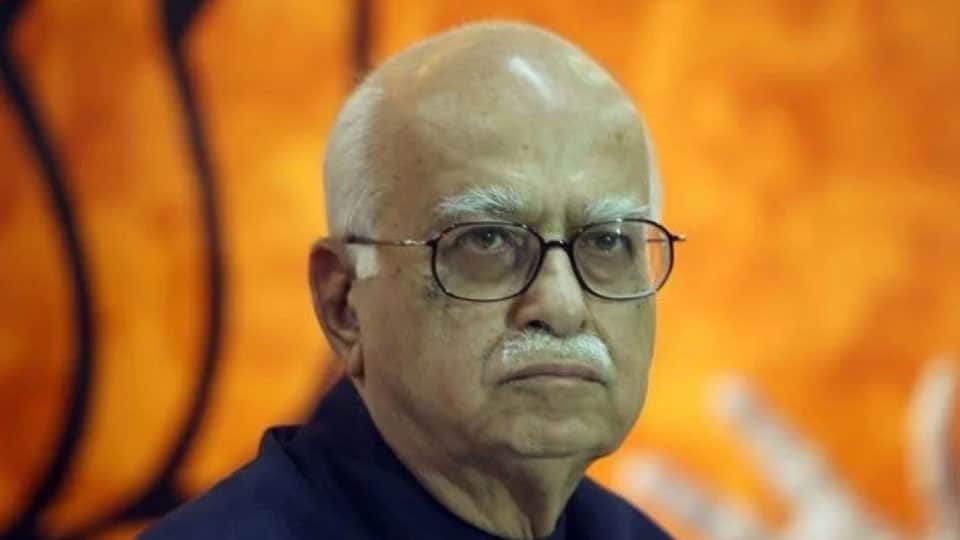 L.K. Advani: Was he cheated by Destiny?

I had read the autobiography of L.K. Advani, the BJP’s top honcho “My Country My Life”, a tome running to nearly 1,000 pages in 2008, as soon as it was published. BJP as a political party has had a very chequered growth from its origin as Jana Sangh, then submerged in JP’s Janata Party and finally Bharatiya Janata Party (BJP). At that time the two leading lights of BJP for the common man were Atal Bihari Vajpayee, the presumptive Prime Ministerial candidate and L.K. Advani. Somehow, despite Vajpayee’s charisma, I preferred L.K. Advani to be the Prime Minister, should the occasion arise in the future. Let it be.

For the last one month I have been watching the show on Netflix called “The Crown.” It is about the British Royalty and I was, to some extent, familiar about the happenings, that I saw on Netflix, when 25-year-old Queen Elizabeth II was crowned in 1953 and the events that followed. Lord Mountbatten too appears and he was the man who partitioned India. He was a close friend of Jawaharlal Nehru who in turn was a close friend of his wife Edwina. Surprisingly a mention was made of this in the serial by Lord Mountbatten himself!

As I was watching this TV show, I was reminded of what I read in L.K. Advani’s book about how his Province Sindh was not divided on the lines of Hindu majority and Muslim majority as was the basis of demarcation but given away in one piece to Pakistan unlike Punjab and Bengal. This is what he had written.

“For Hindus living in those parts of undivided India, which later became Pakistan, Partition was a terrible calamity… The main Provinces affected were Punjab, Bengal and Sindh. But while Bengal and Punjab were divided and so provided a natural home to the uprooted Hindus from those two Provinces, Sindh became a part of Pakistan in its entirety.

“There were districts in Sindh contiguous to Rajasthan, like Tharparkar, which had a Hindu majority. A more assertive leadership could perhaps have succeeded in bringing these districts to India, in which case India’s western boundary could have stretched right upto the sacred Sindhu river. Sadly that did not happen.”

Well, the then Viceroy of India was Lord Mountbatten who was responsible for the Partition under a commission headed by Sir Cyril Radcliffe. Our tall leaders like Mahatma Gandhi, Nehru, Vallabhbhai Patel could have gone to the help of Sindh. Sad, they did not.

Be that as it may, Advani spent 20 years in Karachi (Sindh) and like most Sindhis venerated the Guru Granth Sahib, the Holy Book of Sikh religion. At the age of 14 he joined RSS and began to sing the RSS prayer for our motherland ‘Namaste Sada Vatsale Matrubhoome…’ He also read history books written by the famous historian Jadunath Sarkar on Aurangzeb and Shivaji and got further influenced in his love for the motherland.

After Partition his family moved to India and he continued his service with RSS rising in its rank.

There is no doubt Advani was the main architect of building BJP to what it is today since its new avatar when Janata Party fragmented. Imagine BJP being able to get just two Parliamentary seats in 1984 and how it steadily increased its numbers. In 1992, Advani was a hero, literally a sarathi to Atal Bihari Vajpayee, a Krishna. Remember his famous Rath Yathra from Somanath Temple in Gujarat (which was rebuilt immediately after India got independence. It was destroyed by the Muslim invader Mohammad Ghazni) to Ayodhya. This was one event that had pitchforked Advani to the centrestage of Indian politics. He was first arrested by the then Bihar Chief Minister Lalu Prasad Yadav, who is now in jail for his special ‘Desh Bhakti’. The Rath Yathra, however, continued and reached Ayodhya. Unexpectedly, the Babri Masjid was demolished, but advantage BJP despite many incidents of communal confrontation, Bombay serial blasts and worse the attack on the Sabarmati Express in Godhra (Gujarat) and the massacre of Muslims etc, etc. However, BJP reaped very good political harvest. Eventually, Atal Bihari Vajpayee became the Prime Minister (under an alliance known as NDA) and L.K. Advani, Deputy Prime Minister.

Advani in his book on page- 622 has written about the Indian Airlines plane coming from Nepal being hijacked in 1999 with more than 160 passengers. Much has been written about it but, looking at what we see in Delhi in the form of various protests like Shaheen Bagh and now the ongoing Kisan protests, I must recall here what Advani had written alluding to the Opposition parties opposed to BJP even at that time. Let me quote:

“Thirdly and the most unfortunate part of the entire episode, pressure was being mounted on the Indian Government to ‘somehow’ save the lives of hostages. As the crisis entered its third day, hysterical demonstrations by the relatives of some of the hostages were staged in front of the Prime Minister’s residence, and I regret to say that these were at least partly instigated by the BJP’s political adversaries…”

All this made me wonder: “It used to be said that the Indian State is a soft State, but has Indian society also become a soft society?…”

It is widely publicised by the media that Narendra Modi was sent to Gujarat as Chief Minister by the then Prime Minister Atal Bihari Vajpayee with the blessings of L.K. Advani. Might be true, but when the Godhra incident happened, the media went about saying that though Atal Bihari Vajpayee wanted to sack Narendra Modi as the Chief Minister of Gujarat, it was L.K. Advani who protected Modi from being sacked. It was a symbiotic kind of relationship, the media declared — Modi helped Advani win election while Advani helped Modi remain as CM.

Well, in retrospect, it can be said, if BJP had gone by Atal Bihari Vajpayee’s advice to sack Modi, today we would not have had Narendra Modi as the Prime Minister and dynasty with its coteries would have been ruling the country making it vulnerable to economic failures, military failures and as a soft State in the eyes of the world.

So far so good for L.K. Advani and he was standing at the threshold of Prime Minister’s office in 2004. Alas, but destiny seems to have cheated him. How? He took one wrong step in the eyes of RSS, BJP and vast number of BJP supporters.

Advani, when he was the President of the BJP, had been to Pakistan and made, rather thoughtlessly, two statements in an interview to a Pakistani journalist Hamid Mir. One statement — he did not hate Pakistan and he respected Mohammad Ali Jinnah. Advani had also eulogised Mohammad Ali Jinnah as a great “secularist” praising his speech to the Pakistan Constituent Assembly on 11th August 1947 as ‘a classic exposition of a secular State.’ Jinnah might have delivered the speech but it was an ‘appeasement’ speech delivered at a time when millions of Hindus and Sikhs were being driven out of Pakistan or being slaughtered even as millions of Muslims were driven out of India. If Jinnah was a true Secularist he would not have asked for the division of the country on the basis of ‘two nation theory’. Advani, a senior BJP leader, failed to see this point.

Advani reacted to the criticism by resigning as the President of the BJP.

Here is an interesting reaction from a then visiting Cabinet Minister, Mani Shankar Aiyar, when asked for his reaction. He said with a smile of his brand: ‘I am not bothered about him, he is politically dead.’ Sadly, his words became prophetic.

Thus ended L.K. Advani’s political opportunity to become the Prime Minister for which he was, otherwise, a natural heir. Destiny has indeed cheated him, first by supporting Narendra Modi in Gujarat and second by his visit to Pakistan at a critical time when BJP was in power at the Centre and making statements, uncalled for, about Jinnah.

Well, in retrospect, I have a gut feeling that he was influenced to make this “mistake” by recalling what was hidden in his subconscious mind about Jinnah as stated by Swami Ranganathanandaji of Karachi’s Ramakrishna Mission around September 1947 when Advani left for India. Advani writes in his book (Page 48) “Swamiji, in particular, lauded Jinnah’s historic speech in the Constituent Assembly of Pakistan on 11th August 1947 and said, ‘the true exposition of the meaning of secularism can be found in his speech’.” Well, what happened later? Poor Swamiji had to flee from Pakistan.

I am right. L.K. Advani says, “In a subconscious way, my last conversation with Swamiji was to play a decisive contributory role in my own remarks about Jinnah when I went to Pakistan in May-June 2005.”

Well, is it good to have such a person as Prime Minister of our country, which for many years suffered weak leadership, making India a ‘soft State’? Destiny seems to have saved India !