Home » Columns » Abracadabra By K. B. Ganapathy » Of Brahma Kumaris & the Dacoit 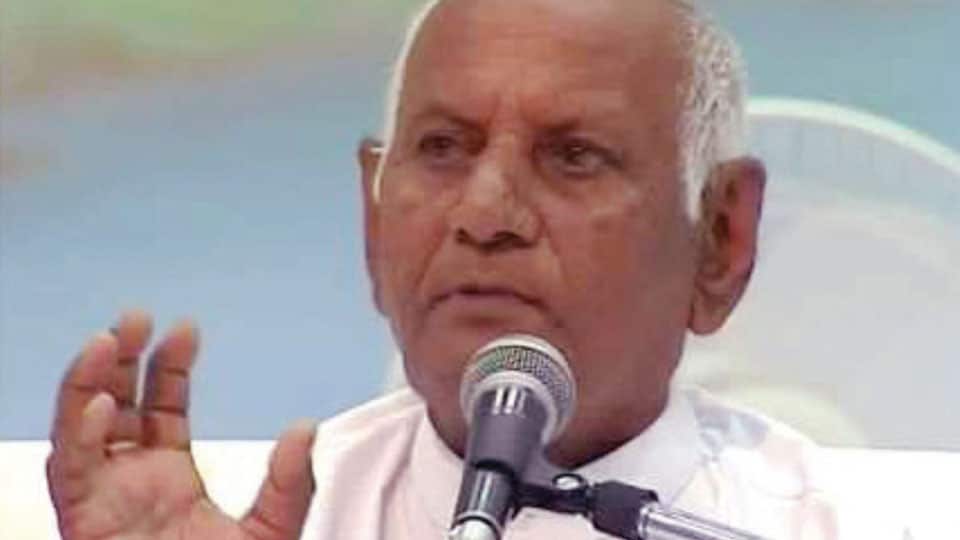 Of Brahma Kumaris & the Dacoit

Pancham Singh, the notorious dacoit of Chambal Valley who surrendered to Jayaprakash Narayan about 12 years ago was in Mount Abu, attending the Universal Peace Conference and was the star attraction for the journalists.

It may not be an exaggeration if I say that he was a good publicity material for the Brahma Kumaris and he was touted as one of their important “catches”. The UNI teleprinter was ticking away creeding the full story of Pancham Singh’s surrender to Brahma Kumaris while a number of journalists hankered for more information straight from the horse’s mouth. I was also one such journalist.

Pancham Singh has committed over 100 murders, during the 12-year period as a dacoit. He became a dacoit when he was about 20-years-old and now at the age of 43, he looks older than his age. He is one among 3 brothers and 5 sisters. His father is Balusi and mother Bhagyavati. He studied up to 4th class and diligently studied Ramayana and Bhagavad Gita. I got a doubt about his claims. But when some one asked him how many chapters were there in Bhagavad Gita, pat came the reply which made a number of my friends raise their eyebrows in surprise. He said in a very causal manner, “Yes, yes there are 18 chapters in Gita and even now I read  the Gita.”

What made him to become a dacoit. He was rather reluctant to reply as he had been narrating to a number of persons the same story since morning that day and probably was fed up of repeating it. He said that he had already got his story written and cyclostyled and we could read it. But then nothing like hearing his story from his own lips. So I cajoled him and here is what he said.

After giving up his studies he was working in his father’s small farm and side by side some wrestling to keep himself fit. At about the age of 17, he was married. Then there was an election in the village. He was then 20 years. He and his brothers supported one group and there was a riot in the village in which his father, his brothers and himself were injured. They reported the matter to the Police, but the Police instead of helping them started harassing them taking money from the opposite group. The Police harassment was so severe that Pancham Singh and his father were hospitalised.

When they returned from the hospital, the opposite party got the upper hand and continued to harass the family with greater cruelty. Since he could not get help either from Police or from the neighbours, Pancham Singh went to relate his difficulties to a dacoit (I think another famous and notorious Madhav Singh) of the Chambal Valley. Madhav Singh was not sure of Pancham’s capabilities, because at the age of 20, Pancham Singh was rather unimpressive, lean and also of short in stature. It appears, Madhav Singh gave him some tests in marksmanship and morality. (There is indeed more honour among thieves and dacoits.) Pancham Singh passed the tests and Madhav Singh in an unusual and uncommon gesture ceremoniously gave him guns and 30 of his men with strict instructions that they should  implicitly obey their new leader Pancham Singh.

The first act of Pancham Singh after thus being initiated into the brotherhood of dacoits was an attack on the opposition party in his village where he killed all the members of the family ruthlessly in one go. After this bloodbath, violence, murder and loot became part of his life. He had a fearsome image with a big moustache and moved about with 30 armed men. He kidnapped and killed about 300 people in Uttar Pradesh, Madhya Pradesh and Rajasthan, where he mainly operated. Even the Police were afraid of his gang.

One admirable quality of Pancham Singh and for that matter he says, most of the dacoits is, the respect they give to women. This is contrary to the belief that is common among people that the dacoits believe in molesting and raping women. Pancham Singh narrated an incident where on being told by his informant that one person of his gang had raped a woman while ransacking a village, immediately Pancham Singh got that person in front of him, tied his hand and legs, suspended him by his legs from the nearest tree, poured petrol on him and set him on fire as a punishment (for violating the chastity of a woman).

Pancham Singh was also a religious man and worshipped Devimata using 1 kilo of ghee everyday in the sacrificial fire  on which he would cut the tip of his finger and offer his blood to the Devi. Offering goats, sheep etc., in the sacrifice before the Devi was a common act. For 12 long years he continued this kind of life and the Police were unable to catch him. So they announced an award of Rs. 70,000 for his capture, dead or alive. Believe it or not, he was a vegetarian even as a dacoit !

He said that Police used to catch his men and a couple of  times Police were able to catch him as well in wedding houses. But Police let him off after receiving  bribes ranging from Rs. 25,000 to Rs. 1,00,000 for his release and for that of his men.

Pancham Singh had 6 persons exclusively to attend to his personal needs in his hide-out in the Chambal Valley and his daily expenses used to be about Rs. 10,000! He never had horses to move from one place to another as we find the dacoits trotting about on horses in Hindi films. It appears, he and his men used to walk in the terrain and the valleys when they were not using jeeps. He also used to give money for the wedding of the poor people and he never involved politicians in his activities directly.

He said he was ruthless in his methods and operations. Once when Police took away his wife and father for interrogation he became so aggressive that he retaliated by killing the Police officers who took away his wife and father. He narrated an interesting incident, regarding a Kashi Pandit and astrologer. Once a certain politician from Delhi paid him a visit and in the course of the conversation told Pancham Singh that this astrologer from Varanasi had told him (the politician) that he would definitely win the election and so he would contest the election and Pancham Singh should support him. When the politician got up to leave, Pancham Singh sent a jeep with men to fetch that Pandit to the Chambal Valley so that Pancham Singh could ask this astrologer about his future.

The next day the astrologer was duly presented before Daku Pancham Singh. Pancham Singh showed him his palm to read. Pandit read the palm and said “Maharaj, for 6 months from now you are going to reign supreme and no harm of whatsoever sort will befall you.”

Pancham Singh told the Pandit: “Panditji, you have said that no misfortune will befall me for the next 6 months. I want to become the Prime Minister of India. Now I am going to Delhi and capture power. I will kill Mrs. Gandhi and sit on her chair. If in the process I am killed or arrested, my men here will kill you by chopping your body from legs onwards piece by piece. Now I am going.”