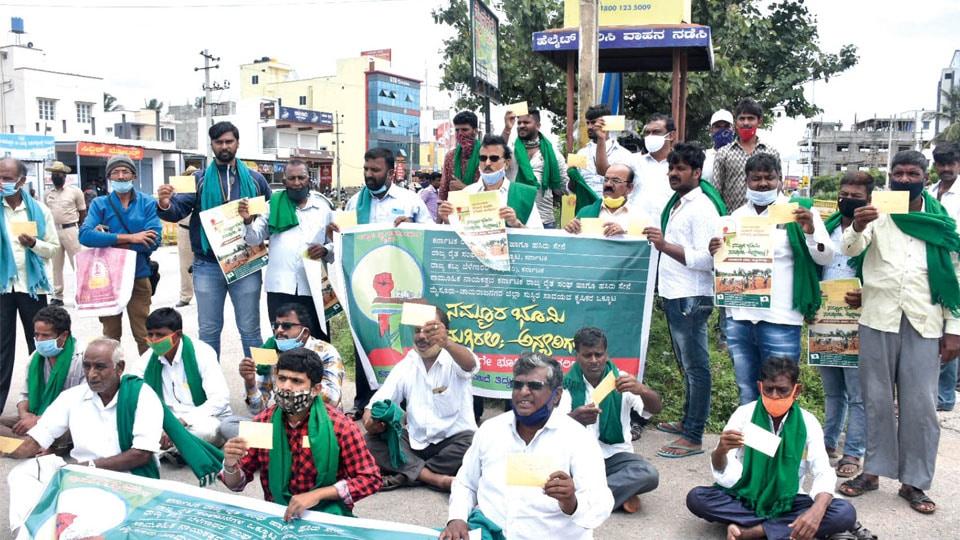 Strongly condemning the amendments to Karnataka Land Reforms Act, the protesters shouted slogans and held placards displaying ‘Nammura Bhumi Namagirali, Anyarigalla’ (Our village land belongs to us, not for outsiders).

Speaking on the occasion, President of Karnataka Rajya Raitha Sangha Kuruburu Shanthakumar said, “The State Government’s decision to amend the Land Reforms Act is detrimental to farmers’ community in the region. We are going to hold protest in front of the city Court complex  on Aug. 8. This year, farmers from across the State will symbolically observe Aug. 15 as a ‘Black Day’.”

Over 50 members of MCC Permanent and Contract Pourakarmikas Association held protests at Mysore City Corporation (MCC) premises on Sayyaji Rao Road this morning. Protestors urged the district administration to remit salaries of Pourakarmikas directly to their accounts immediately, which has not been paid to them from the last three months.