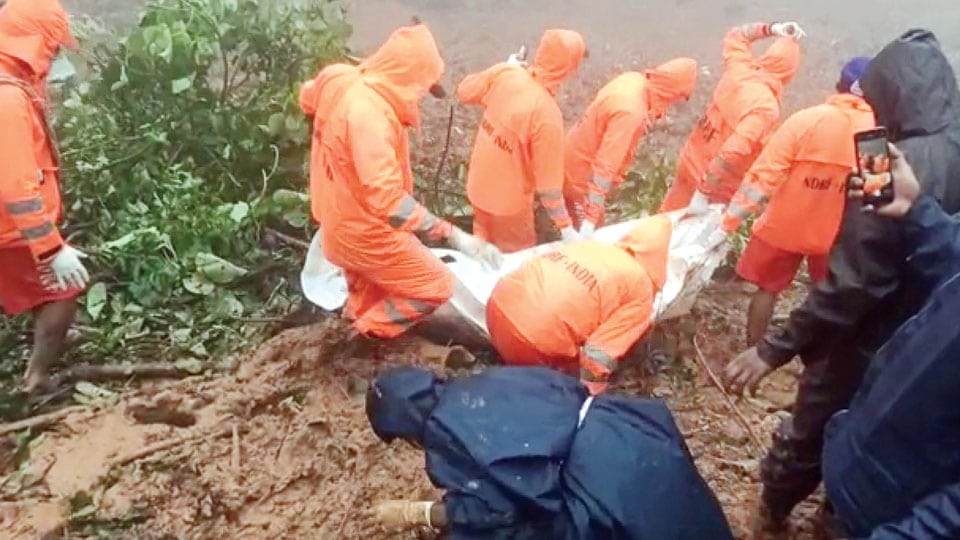 Madikeri: The National Disaster Response Force (NDRF) team, which is continuing ‘Operation Brahmagiri 2’ since Aug. 13 to trace those who are missing following the landslide at Gajagiri Hill next to Brahmagiri Hill in Kodagu, has found another body in a decomposed state yesterday morning.

The body found buried under the mud and in a decomposed state at a distance from Nagatheertha, has been identified based on the finger ring as that of Ravikiran Bhat (29), a resident of B.C. Road in Madikeri. Sources said that he was the Assistant Priest of Talacauvery.

As there is a protected forest below the landslide site, Forest Department staff was conducting regular beats in the area and as the forest staff knew every inch of the forest, the search was conducted under their guidance from the spot, where the body of Chief Priest Narayanachar was found to a distance of five kilometres.

It may be recalled that following a major landslide at the holy place of Talacauvery in Kodagu district in the midnight of Aug. 5, five persons — Talacauvery Temple Chief Priest T.S. Narayanachar (70), his wife Shantha Narayana (68), Shantha’s brother Anandathirtha and relatives Ravikiran Bhat and Srinivas Bhat had gone missing as a portion of the Brahmagiri Hill collapsed on two houses where the priests lived due to heavy rains.