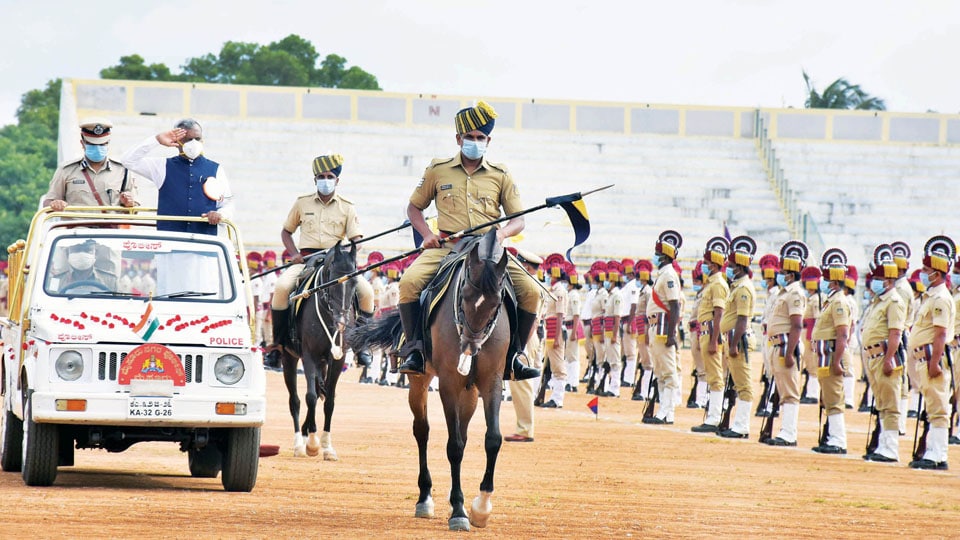 Mysore/Mysuru: Amid the spread of the deadly COVID-19 pandemic, the 74th Independence Day celebration organised by the District Administration in the city yesterday was a simple affair, sans any cultural programmes and participation of School children.

Speaking on the occasion, Somashekar said that the erstwhile Mysore rulers, decades ago had initiated ‘Atma Nirbhar’ concept which is much being talked about today, in order to make Karnataka self-reliant in all respects.

Pointing out that Prime Minister Narendra Modi through ‘Atma Nirbhar’ concept with the theme ‘vocal for local’ is determined to make the country self-reliant in the true sense, Somashekar maintained that the country is making rapid progress under the leadership of Modi.

Highlighting the contributions of the erstwhile Mysore Maharajas, he said that the establishment of Mysore Lamps, Mysore Paper Mills at Bhadravathi, HAL, Mysore Lac and Paints, Sandalwood Factory, MySugar at Mandya, Shivanasamudra Power Generating Station and such other major industries and the setting up of top institutions such as University of Mysore and State Bank of Mysore are all examples of the vision of the Mysore Maharajas.

Noting that Mysuru has earned global name and fame for its achievements, Somashekar said that the District has become a model for the country in respect of development.

Referring to COVID-19 care in the District, Somashekar said the District Administration is fully prepared for treating the increasing number of COVID-19 positive patients.

Pointing out that more than 23 hospitals are providing COVID-19 care, he said that there are 38 COVID Care Centres in the District and Hostels, Residential Schools and Schools have been utilised for the purpose.

Asserting that the District Administration, learning from previous experience, had taken precautionary and safety measures much in advance of floods including shifting of people from vulnerable areas to safer locations, he said that these measures helped in preventing fatalities and mitigating damages to a large extent.

M.R. Bhavana of Morarji Desai Residential School at Bherya in K.R. Nagar taluk, who scored high marks (611/625) in SSLC was presented a Rs.10,000 cheque and an appreciation certificate on the occasion.

Earlier, Minister Somashekar received the Guard of Honour from KSRP, CAR, DAR and other Police wings. Due to COVID-19, there was no cultural presentation by School students. However, all those who attended the event were asked to compulsorily wear face masks and undergo thermal screening. The event also saw maintenance of physical distancing.