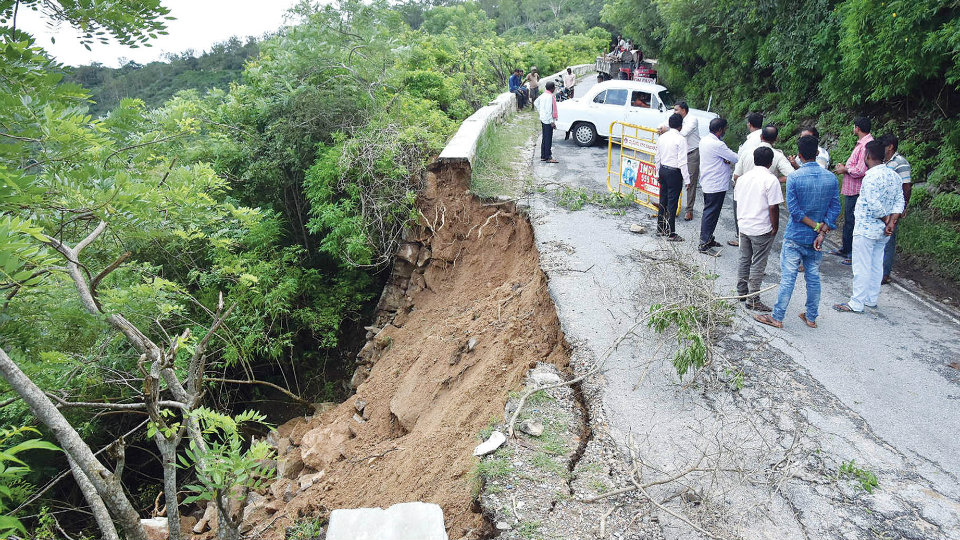 Mysore: The Road between View Point and Nandi Statue atop Chamundi Hill has been temporarily closed for vehicular traffic from this morning as a portion of the Hill caved in yesterday. Vehicles have been asked to take regular route to reach Chamundeshwari Temple and alternative Road to Nandi Statue.

A portion of Chamundi Hill along with the retaining wall collapsed due to incessant and intermittent rains. Following this, officials from the Public Works Department (PWD), who maintain the Road, visited the place last evening and immediately stopped vehicle movement till the repairs are undertaken.

Speaking to Star of Mysore, PWD Assistant Executive Engineer R. Raju said that 50 feet of the land portion along with the retaining wall slipped into 22-feet gorge. “We have rounded on the technology that will be used to repair the stretch and we will consult soil experts for the work. Modern technology will be used to restore the damaged part and prevent further crashes,” he said.

Barricades were placed on both sides of the Road yesterday night itself and Policemen were posted till 10 pm. As the Roads leading to the Hill are usually closed at 10 pm, there was no vehicular movement. Today morning too, no vehicle was allowed on the stretch.

A team of PWD officials led by Executive Engineer Vinay Kumar visited the spot this morning, and told SOM that traffic has been banned on this stretch till 15 days.

“Work will start immediately as it comes under emergency work category. We will use the Natural Calamity Funds and will not call tenders for this as tendering process will delay the works,” he said. He added that the retaining walls have developed cracks at several places and they need to be fixed to prevent further landslips.

Vinay Kumar said that the work estimate has already been prepared and the information has been passed to PWD higher officials and the Mysuru Deputy Commissioner.

“As of now we cannot see the actual damage as the area is steep. Vehicles have been banned as the pressure on the Road will lead to more damage and the retaining wall and the Road might give in. We will do this work in a scientific manner and in consultation with geologists and soil experts,” he added.

Incessant rains atop Chamundi Hill have given birth to many vertical swift-streams and waterfalls from the Hilltop.

Tourists who are coming to the Hill are stopping by the Road to hold the cascading water in their hands and feel the water slipping from their legs.

Some are also taking selfies and sharing them on social media.

Soil experts say that there is no designated place for the water to flow from the Hill due to rampant development and water escapes from any given crevice or a gap. These waterfalls are one of the reasons for the soil to loosen and cause landslips, they say.