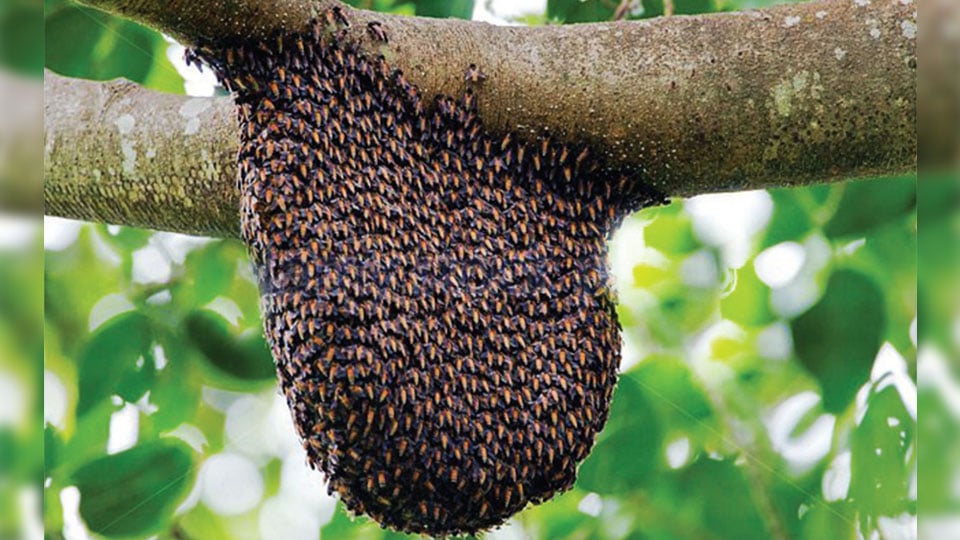 It was the year 1989 and was around the time that I was slowly beginning to understand the indigenous way of life.  These were also some of the best years of my life and I cherish the memories of my association with some of the elderly tribal chieftains of Heggadadevanakote (H.D. Kote).

I was keen on learning how the Jenukurubas, an indigenous tribe with distinct anthropological features collected ‘Jenu’ (honey) from the forests.  Hostel Masthi (as he was popularly called) was the chieftain of the Jenukurubas living in Hosahalli and surrounding colonies and was a respected elder who used to be sober only when he ventured into the forest.  On learning that I was keen to understand how they collected wild honey, he invited me on his next trip.

Full of anticipation of the adventure ahead, I set out with him, his 10-year-old son Mara and 3 other Jenukuruba tribals from the colony. After a walk of around 3-4 kms, Masthi spotted a large beehive hanging high up on a tall tree.  He asked Kala, who was accompanying him, to quickly climb up the tree to cut the hive with the sickle that he was carrying.  Kala was a natural climber and watching him climb up the tree is something that I can never forget.  Within minutes he seemed to reach the hive and shouted out to Masthi to be ready below.  Not sure of what was happening, I stood a little distance away watching the whole scene unfold in front of me.

Masthi and another tribal Mahadeva spread out their towel and placed the broad leaves that they had freshly cut from a nearby teakwood tree on it.  Holding each end of the towel, they stood underneath the tree in direct line of the hive. The bees must have sensed Kala’s presence and started buzzing angrily around the hive.  In a split-second, Kala seemed to put his hand into the hive and gently extracted out the ‘queen’ and placed it in the middle of his forearm.  All the bees followed the queen and quickly settled down on his forearm.  I stood transfixed staring at the hive that was forming on Kala’s forearm and was left wondering why Kala was not getting stung by these disturbed bees.

With his other spare arm, Kala sliced the hive around 6-8 inches below where it was attached to the branch and the rest of the hive with the honey, wax, pupa and all came crashing down.  More adept than a determined fielder on a cricket field, Masthi and his mate caught the falling hive on the teak leaf bed and folded the cloth immediately around it.

Kala in the meanwhile pulled the queen again from the new hive on his hand and gently put her back on to the original base of the hive still hanging from the tree.  And within minutes, all the remaining bees flocked around their queen and the hive formed into the exact shape that it was before Kala had sliced it. Kala came down the tree as quickly as he had climbed it and everything seemed to happen within a few minutes and it looked as though nothing had really changed.

I was left spell-bound and unsure of how to respond when Masthi offered me a dripping piece of the crushed hive – honey, wax and possibly some unlucky pupa and larva.  I had never tasted anything like this and it surely was finger-licking good. Masthi felt that we had enough adventure for the day and we started to walk back to Hosahalli.

On the way back, I could not contain my curiosity any longer and was keen to know why Kala sliced the hive so low and had left most of the honey back in the hive itself. It seemed economically stupid that someone would leave behind much of the honey back in the hive and still feel that they had completed a good day’s job.  Masthi’s answer continues to resonate in my ears even today.  For him this was indeed a no-brainer.  He simplistically explained that the honey belonged to the bees and that they were actually thieves stealing it from them.   He said that since the bees had done all the hard work in collecting the honey, it was only more than fair that they left behind most of it for them to use during the difficult months ahead.   If he and his people did not have to use this part of the hive with the honey in it for food and preparing medicines, he would not even have taken this much too.   And Masthi and his fellow tribals were bringing back this hive not just for themselves but to be shared amongst all his clansmen.

For a person educated in a system that looks to maximising profits and minimising labour, this lesson in compassion, fairness and sharing seemed perplexing.  For a world that seems to be rapidly absorbing and celebrating the spirit of market economics and individual attainment, Masthi and his fellow tribals will seem unreal and this anecdote difficult to believe.

Masthi and people of his generation are long dead now but along with them has also disappeared this sustainable and meaningful way of living too.  What is worrisome is not just the fact that this lifestyle sounds impractical and difficult to subscribe to for many of us, but is also no longer a part of the culture and life of our indigenous brethren too.  While one may feel that modern existence and the pressure of a consumer economy will neither slow down nor have the space for people like Masthi, we need to contemplate and think on how we can integrate this paradigm into our everyday lives.  For without it, sustainable development will only remain a slogan that is bandied about in international conferences and global summits.

[Dr. R. Balasubramaniam is a development activist and Founder of Swami Vivekananda Youth Movement. He can be reached at: [email protected]]