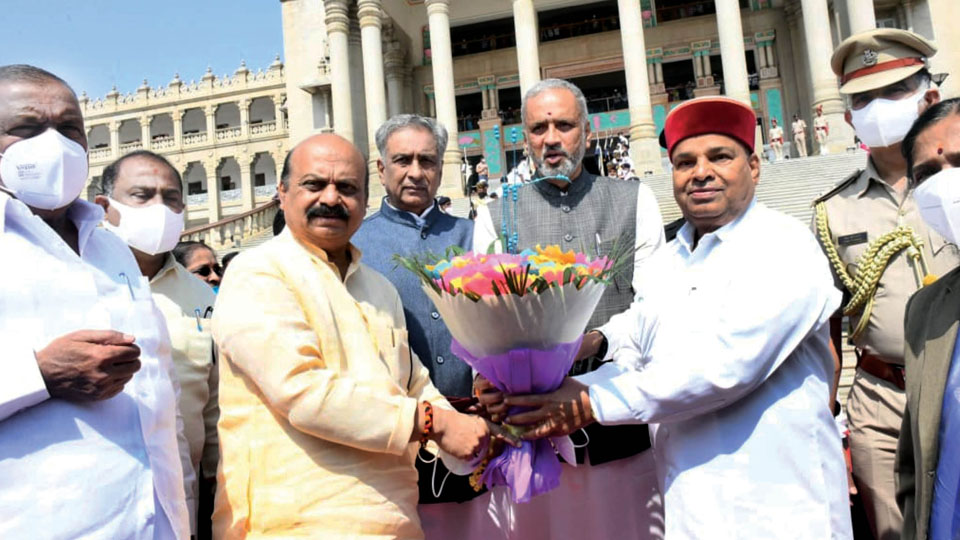 Bengaluru: The joint session of the Karnataka Legislature began at Vidhana Soudha this morning. The 10-day session that will go on till Feb. 25, got started with Governor Thaawarchand Gehlot addressing the joint sitting of members of both Legislative Assembly and the Council.

In his address, the Governor outlined the policies and programmes of the State Government and said that from Apr. 1, six kg rice will be given free for BPL families in addition to the present 5 kg. He maintained that despite the pandemic, Foreign Direct Investment (FDI) in Karnataka has increased, with the State accounting 48 percent of the total FDI in the country.

All ineligible and dubious 3.15 lakh beneficiaries of various pension schemes of the Government have been kept out, thereby saving Rs. 370 crore, he said.

The session is expected to be stormy as the principal Opposition Party, Congress is likely to corner the Government on several issues, including the hijab controversy and the related law and order situation, with protests in this regard turning violent in some parts.

The Ruling and Opposition parties  have been blaming each other for the issue being escalated into a major controversy. The Congress is also likely to raise the issue of 40 percent kickback charges levelled by the Karnataka State Contractors Association against politicians, Ministers and bureaucrats.

The issue relating to the Mekedatu project is also likely to come up in the wake of Congress’ recent padayatra demanding its implementation. The BJP, which has been accusing the grand old party of trying to politicise the issue is likely to counter it for going ahead with the padayatra in violation of COVID curbs.

Speaker Kageri said that he will explore the possibility of reserving two days of the present session, exclusively to discuss electoral reforms. Terming electoral reforms as an important subject vital for Democracy, Kageri reiterated that it needs to be debated and discussed by intellectuals, decision-makers and a cross-section of people.

“I have also requested the Chairman of the Legislative Council to take up the matter for discussion in the Upper House,” Kageri said, disclosing that he has written letters to the Heads of Educational Institutions and Vice-Chancellors, requesting them to initiate discussion on electoral reforms.