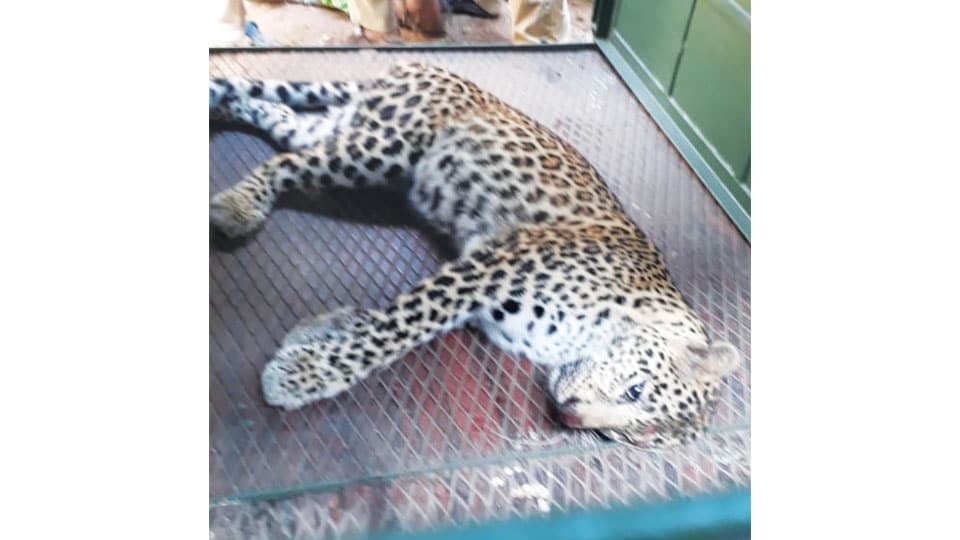 Mysore/Mysuru: A four-year-old leopardess, which had strayed into a poultry farm in search of food, was successfully tranquillised by the Forest Department staff yesterday and was later released into Nagarahole Forest.

On Oct. 18 night, the leopardess entered the poultry farm of one Gojjegowda at Salundi village of Jayapura hobli in the taluk. After devouring two chicken, the leopardess, unable to move out, had hid inside the chicken enclosure.

On Oct. 19 morning, when the farm workers arrived and went near the chicken enclosure, the leopardess gave a loud snarl and the workers, who saw the leopardess closed the enclosure door thus trapping the big wild cat inside and informed the farm owner, who in turn informed the Forest officials.

The Forest Department personnel, who arrived immediately, sought the help of the Police to keep the villagers from venturing near the chicken enclosure, summoned Bandipur Tiger Reserve Veterinarian Dr. Waseem, who tranquillised the feline.

The Veterinarian, who examined the leopardess, confirmed that it was healthy and only then the Forest staff obtained permission from their higher officers, shifted the wild cat to Nagarahole Forest, where they released it into the wild.

Deputy Conservator of Forests (DCF) Kamala Karikalan said that the leopardess was caught successfully at the poultry farm and has been released into Nagarahole Tiger Reserve successfully.