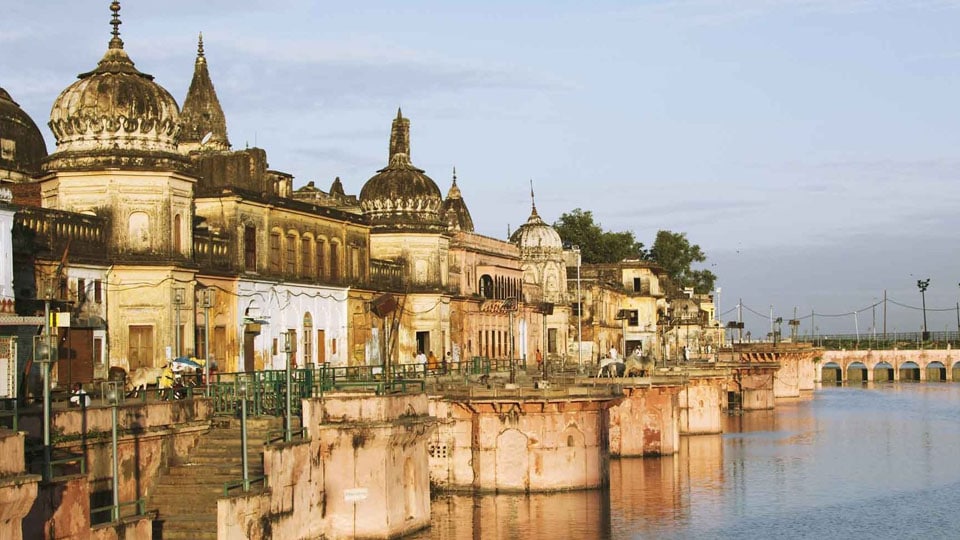 The Ayodhya story is never old. The historical background, the personages involved, the tragedies and the triumphs associated with the city will always remain fresh in the minds of Indians.  The main reason may be the religious dimension acquired through the story of Rama.  But even without the religious link, Ayodhya has a certain fascination, or shall we say greatness, built into it.

This explains the continuing involvement of Rama in our everyday activities.  This month the Bangalore International Centre is releasing a book, The Multivalence of an Epic, with “a historically informed discussion on the journey and localisation of the Ramayana across land and seas.”  Participating in the discussion are JNU Professor, H.S. Shiva Prakash, dancer Madhu Nataraj, European Studies specialist Neeta Inamdar, former Foreign Secretary Nirupama Rao, Delhi University Professor Parul Pandya Dhar and Hyderabad University’s History Professor Suchandra Ghosh.

Three years ago Ayodhya: City of Faith, City of Discord by Valay Singh reminded us yet again about the unconquerable quality of the Ayodhya legend.  In fact the number of books on Ayodhya is a pointer to the attention latter-day controversies have attracted.  From Salman Khurshid’s Sunrise Over Ayodhya: Nationhood in Our Times to Sarvepalli Gopal’s The Anatomy of a Confrontation, books have examined the issue from all possible angles. The politics that showed an ugly face too has been examined in detail.

The title of the book written by Krishna Jha and Dhirendra Jha speaks for itself — Ayodhya, The Dark Night: The Secret History of Rama’s Appearance in Babri Masjid.

READ ALSO  Be it currency shift, Aadhaar, GST, there is a mad rush; People feel cornered, vexed. Why this mad rush?

Devotees acknowledge seven sacred cities, Sapta Puri, in India which must be visited if one were to attain moksha: Ayodhya, Mathura, Haridwar, Kasi, Kanchi, Avantika (Ujjain) and Dwaraka.  There are more than 700 temples in Ayodhya.  This may be seen as recognition of the city’s special status.  But it pales into insignificance when we realise that Varanasi has 20,000 temples, lending legitimacy to the claim that it is the country’s spiritual capital.

It may be just one of seven, but Ayodhya has a certain sentimental appeal that is unrivalled. Rama, of course, is the primary factor here, but I am among those who feel that Ayodhya’s identification with Dasaratha is just as important, if not more. Rama’s pre-eminence is supreme, but that does not diminish the nobility of Dasaratha’s character.

It is true that Dasaratha’s story is essentially a tragedy.  He killed Shravana by mistake.  That did not make it easier for Shravana’s old parents to accept the untimely loss of their only support in life.  The unconsolable parents put on Dasaratha the curse that he, too, would suffer from the loss of his son.  The curse worked.  Dasaratha was unable to suffer the separation from Rama.  He died a victim of sorrow.

Dasaratha’s problems arose from his adherence to dharma which also underlined the greatness of his character.  The Ramayana specialist Arshia Sattar makes the point that Kaikeyi, usually seen as villainous, was in fact “fulfilling her dharma as a mother by attempting to secure her son’s future in a royal family that had three other contenders to kingship.”

READ ALSO  Time to ponder what happened to Independence. How the confidence of 1947 gave way to antagonisms

Perhaps it was a tactical mistake to build up a vision of Ram Rajya as a Utopia.  Tulsidas popularised the idea of a country where all were happy, living without fear, grief or sickness.  All wishes came true in Ram Rajya. It was a living metaphor of social harmony and ethical conduct.

It seemed natural that in such a land, power should go to a saffron-clad personage, the more so if he is officially described as a yogi.  But how easily the grandiose yielded to the trivial.  What the world saw under the yogi was an Ayodhya on the verge of ecological disaster.  A Rs. 600-crore emergency plan had to be launched just for the cleaning of the Sarayu river.

Harishchandra and Raghu were kings of Ayodhya like Rama was.  They renounced their kingdom to uphold dharma.  Tulsidas saw the gardens of Ayodhya redolent with flowers and fruits.  Mountains yielded gems and oceans never caused floods.  Such orderliness of nature and established definitions of society ensured a thriving economy in Ram Rajya.

In our own times it was all reduced to a controversy that could not possibly have an amicable solution; should a temple rise on the holy spot or a mosque? Answers to the question could never rise above the religion of the individual who was asked.  As poet Vayalar said: Man created religions.  Religions created Gods. Religions and Gods joined hands to exploit the minds of humans.