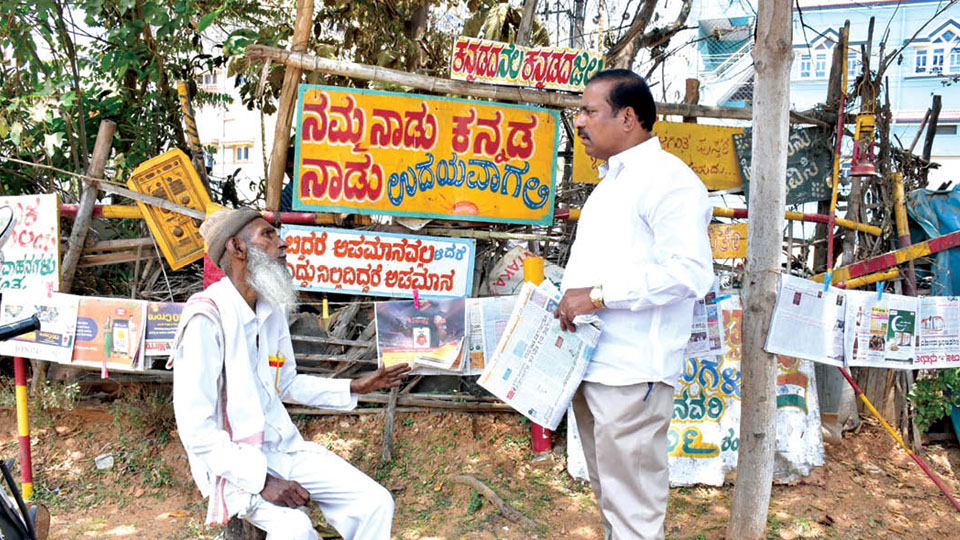 Mysore/Mysuru: Help has been pouring in for the reconstruction of the library which was destroyed in the fire in the wee hours of Friday at Rajivnagar 2nd Stage.

Various organisations and individuals have voluntarily approached Syed Isak, the man who had built the library, promising him all support after the news titled ‘Public library destroyed in fire’ was published on Apr. 9 in Star of Mysore.

Speaking to SOM, 67-year-old Syed said, “I am an illiterate. I had built the library to help others read good books and also update themselves about the happenings across the globe for which I used to get 18 newspapers in Kannada, English, Urdu and Tamil languages every day. But some miscreants have burnt down the library which has destroyed over 11,000 books including Holy Scriptures. I will build 100 such libraries if people bless and support me.”

The library was established in 2011 by Syed Isak at Rajivnagar 2nd Stage in a 10×18 shed. Most of the books were received by Syed through donations while a few books were purchased by Syed. Recognising his services, many organisations had felicitated him and had presented him awards.

Writers, book-lovers, littérateurs and others took to social media and have begun a campaign to help Syed and many have offered to donate Kannada books to his library.

Primary and Secondary Education Minister S. Suresh Kumar, who took to Facebook, said that he had learnt that Syed was running the library since many years after collecting various books.

He stated that some miscreants had burnt down the library destroying the books and added that he would extend all help to Syed. “I will visit Syed Isak, when I come to Mysuru,” the Minister said.

Former CM Siddharamaiah, who took to Twitter, has condemned the burning down of the library. “The miscreants should be arrested immediately and compensation should be provided to Syed,” he said.

Meanwhile, BJP State Vice-President M. Rajendra and former Mayor Ayub Khan visited the spot this morning. Syed, who spoke to B.Y. Vijayendra (son of CM B.S. Yediyurappa) from Rajendra’s  phone, requested Vijayendra to get the library space allotted and build a permanent structure so that he could start the library. Vijayendra is said to have assured Syed of speaking to the CM in this regard.

My profession took shape in the library and hence library is a temple to me. I was very saddened when I read the news of the library being burnt down. Miscreants have destroyed the library, but they have not destroyed the helping hands. I want the library to be rebuilt in the same place for which I will donate books worth Rs. 1 lakh to the library. – N.M. Biradar Chanakya Career Academy, Vijayapura.