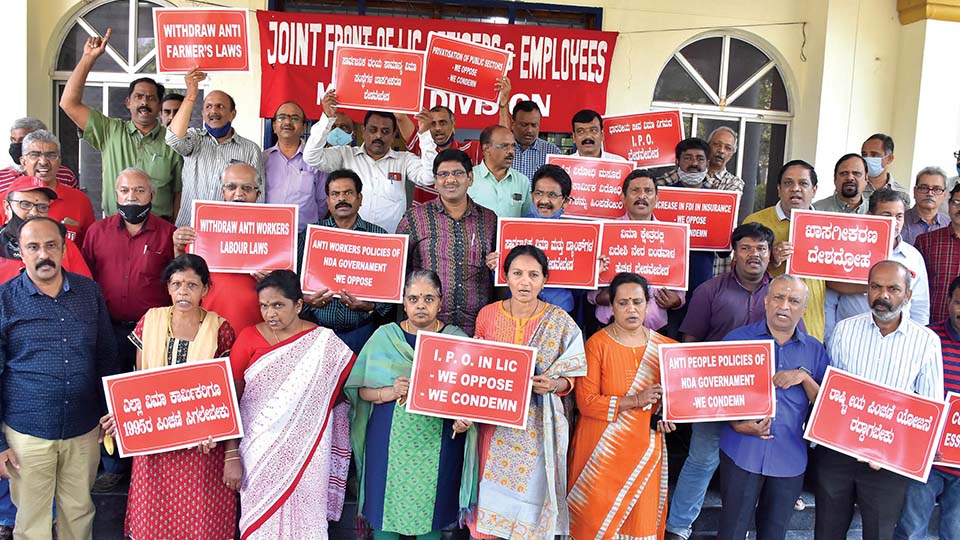 The employees who gathered at the LIC Divisional Office at Bannimantap in city, staged a demonstration to protest against the centre’s proposals to divest stake, privatise one general insurer and enhance FDI limit in the insurance sector from 49 to 74 percent.

Maintaining that the proposed floating of Initial Public Offer (IPO) to sell the Government stakes in LIC were not in the interests of the country, the employees said this would amount to privatisation of the Public Sector Insurance Company. Terming the Government’s privatisation plans as anti-people move, the protestors rejected the Government’s justification that it would bring in discipline.

Contending that the Government’s stance lacked merit as many private sector entities in the insurance and banking sector have collapsed in recent times, they asserted that public sector institutions have fared well despite the meltdown in global economy.

Asserting that the privatisation moves will  badly hurt small policy holders, who mostly are from poor and economically backward sections,  they said that the Government’s move defeats the very purpose of social justice.

Alleging that the Government, bowing to the pressures of private players, hiked the FDI in the insurance sector from 26 percent to 49 percent in 2015, they said that now, the Government has taken this move much forward by enhancing the FDI limit to 74 percent, the announcement of which was made in the Union Budget. Expressing concern that this huge FDI hike will benefit foreign insurance firms, they urged the Government to drop privatisation plans and take measures for strengthening the Public Sector Insurance industry.