Home » Coronavirus Update » Like 2020, low-key Dasara this time too 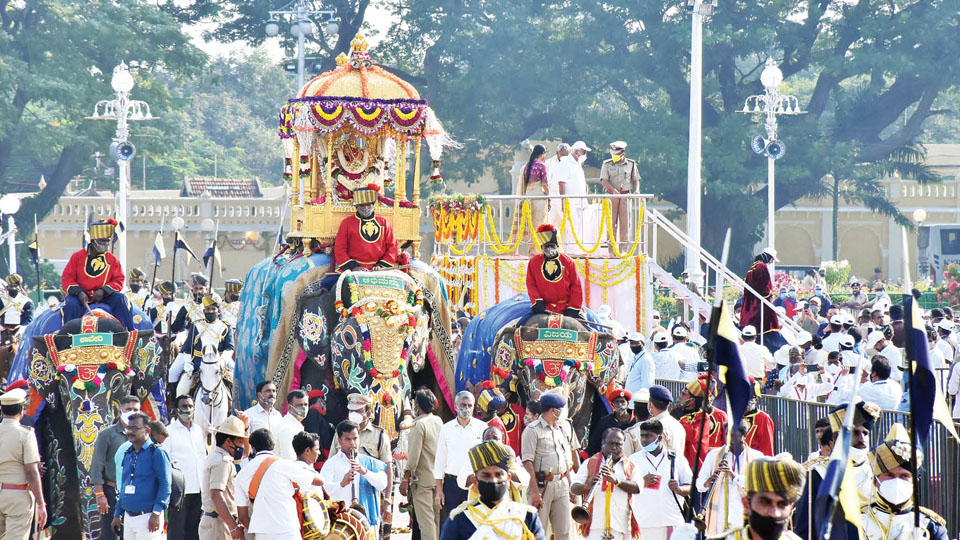 Mysore/Mysuru: The 2021 Dasara will be celebrated in a simple manner in the wake of COVID-19 pandemic like last year and in view of the prevailing flood situation in Karnataka.

In 2020, the celebrations were restricted to about 300 atop Chamundi Hill for the inaugural while the Jumboo Savari was restricted to the Mysore Palace premises, with a limited number of elephants and tableaux. Entry of public was banned into the Palace.

The official State-festival of Karnataka, Mysuru Dasara is a grand 10-day spectacle that culminates on the day of Vijayadashami. Every year, Dasara celebration attracts a huge number of tourists from all over the world to the heritage city of Mysuru.

Minister for Cooperation S.T. Somashekar indicated that the Dasara celebrations will be simple in view of the threat of COVID-19 third wave. He has been deputed to oversee measures against the spread of COVID-19 in Mysuru and Chamarajanagar districts.

The Minister who visited the Bawali check-post bordering Kerala yesterday said that it is risky to celebrate Dasara in a grand manner at a time when the pandemic is showing signs of revival in the neighbouring States.

He, however, ruled out cancelling the celebrations as it would be against the tradition that has been followed from centuries. He said he would draw the attention of Chief Minister Basavaraj Bommai to convey a meeting of the Dasara High-Powered Committee on Dasara celebrations, where a decision would be finalised.

“I have already directed the District Administration to prepare plans for a simple Dasara and after the plan is chalked out, I will take the issue to the CM,” he said and added that last year, the Dasara celebrations were scaled down based on the recommendations by the COVID-19 Technical Advisory Committee.

“As such, of the Rs.10 crore released by the State Government for last Dasara, only Rs. 2.5 crore was spent. The remaining money could be used for a low-key celebration this year. A final decision would be taken after a discussion with the CM,” he said.

Like 2020, the State Government had scaled down celebrations in 2001 and 2002 due to earthquakes in Gujarat and drought in Karnataka. The State spends about Rs. 50 crore on Dasara celebrations every year.