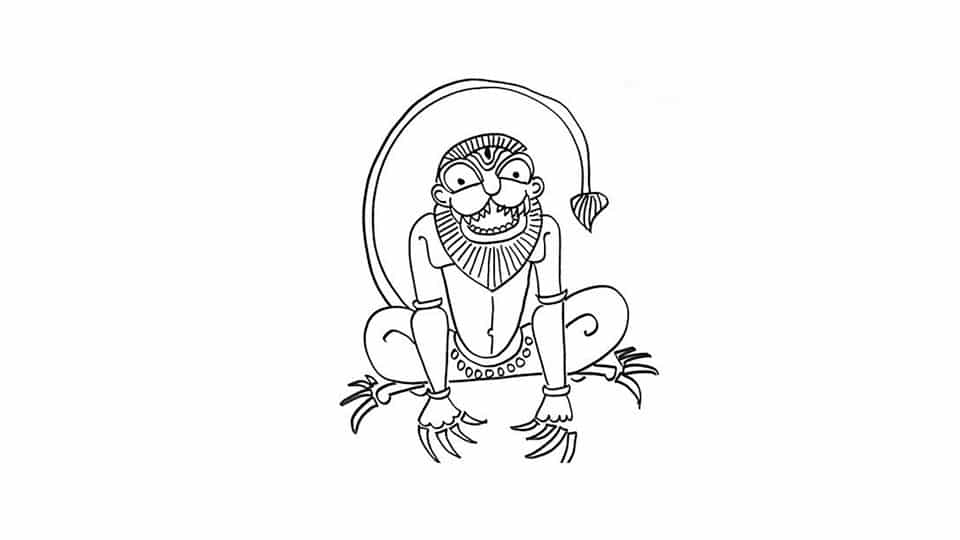 Once upon a time, there was a Princess of Kalinga, who was abducted by a lion who forced her to bear him a child. The child, Sinhabahu, killed his own father and, for this crime, was told to leave the country on a ship. He travelled to a special island in the South known as the Island of Gems. There, he met a yakshini and together, they had children.

But, to become a king, he needed an Aryan wife and thus, he married a Princess from the Pandyan lands. This angered the yakshini, who returned to her people, but her people rejected and killed her. In some versions, she turned against her husband, forcing him to escape on a special flying horse. After which, she went to his country and ravaged it, until she was finally overpowered by the lion king.

The story of the lion king is part of Sri Lankan origin stories. It comes from the Mahavamsa, which was written 1,500 years ago, in 5th century AD, after the Gupta empire had waned in India. It is loosely based on a Jataka tale. The Jataka tale is called the Vallahasa Jataka. It speaks of how, in his previous life, Buddha took the form of the horse (the Bodhisatva) that helped the lion king escape. The king later returned to defeat his yakshini wife.

The Mahavamsa states that Buddha, in his lifetime, had travelled to the island of Sri Lanka, where he had defeated yakshas and nagas. Later, King Ashoka’s son and daughter, Mahendra and Sanghamitra, went to Sri Lanka with a sapling of the Bodhi Tree under which Buddha attained enlightenment. This Bodhi Tree is still found in Lanka. There is Buddha’s footprint found on Adam’s peak. According to Muslims, this footprint belongs to Adam.

Even today, Sri Lanka’s national flag is the lion, although the lion is not native to Sri Lanka. This speaks of the influence of kingdoms, like Bengal, Orissa and Andhra Pradesh, where the lion was very sacred. Even today, on the eastern coast, in Andhra Pradesh, there are temples associated with Narasimha. Narasimha is an avatar of Vishnu: the man-lion who kills Hiranakashyapu, the demon father of his devotee, Prahalada. Thus, the theme of a half-man-half-lion killing a father travels in a very different way, via the Mahavamsa, to Sri Lanka. It then establishes itself in the origin myth of that land. Whether this story is true or not, it retains the memory of an ancient connection with ancient India.