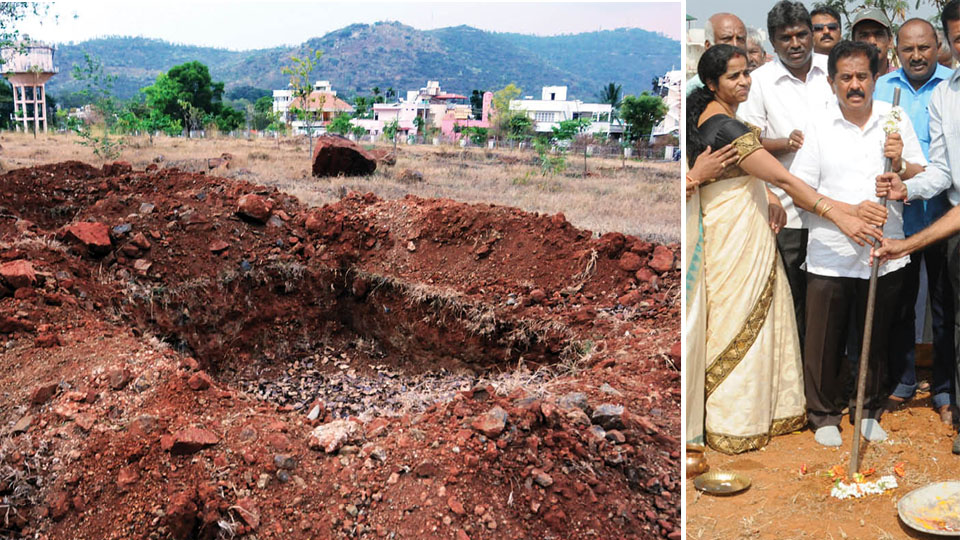 Speaking on the occasion, Somashekar, dismissing speculations of a Bayalu Ranga Mantapa coming up at the spot, said that he had performed the guddali puja for Makkala Mantapa that caters only to the play needs of the children.

Interestingly, the pamphlet announcing the bhoomi puja and felicitation to the MLA states that the bhoomi puja is for MCC-funded “Bayalu Ranga Mantapa” and not Makkala Mantapa as MLA Somashekar said.

Explaining the features of the Makkala Mantapa being built by the MCC at a cost of Rs. 13.5 lakh, he said that the Mantapa will have an open floor area of 30 sq.mts and also a Green Room with a floor area of 9 sq.mts which includes a toilet, for the benefit of elderly walkers.

Emphasising that the Mantapa has been designed to provide ample space for children to practise yoga and other physical exercises, MLA Somashekar said that the Green Room that adjoins the Mantapa will facilitate the elderly walkers to relax.

The MLA also ruled out installation of a sound system at the park as speculated.

Referring to the State Cabinet’s decision to drop MUDA Layouts in Kurubarahalli Sy. No. 4 and Alanahalli Sy. No. 41 from ‘B-Kharab’ classification, thus bringing huge relief to thousands of residents, Somashekar, taking credit to himself for the Cabinet decision, said that it took him more than three months to go deep into the complex issue.

Pointing out that following the Cabinet decision, all MUDA Layouts coming under Kurubarahalli Sy. No. 4 and Alanahalli Sy. No. 41 will now be transferred to MUDA, Somashekar said that at present, he has been working hard for issuance of a Government order in this regard.

Accusing former Minister and BJP leader S.A. Ramdas of associating himself with the then Deputy Commisioner P.S. Vastrad to classify the lands as ‘A-Kharab’ when in fact the said lands belonged to the Government, Somashekar said that the then BJP MLC G. Madhusudan, taking objection to this, had moved the Court challenging the then  DC’s action.

On the occasion, MLA Somashekar was felicitated by K.C. Nagar Residents Welfare Association for solving the Kurubarahalli and Alanahalli row.

The Association appealed the MLA to ensure 24×7 Cauvery water to the locality.

Martyred Jawan A.P. Prashanth’s brothers, who arrived at the spot, appealed the MLA to name the Makkala Mantapa after A.P. Prashanth only and no one else.

Meanwhile on Saturday, the K.C. Nagar Residents Welfare Association, suspecting that the guddali puja would be performed for an open air theatre, had strongly objected to the MCC’s move.

The residents alleged that the MCC had proposed to construct the Mantapa at the spot in violation of the Court Order.

Pointing out that the MUDA, in its advertisement in newspapers while calling applications for distribution of sites, had assured of a vast park in the Layout, they maintained that the MCC’s move to construct the Mantapa defeated the very purpose of creating a refreshing atmosphere in the area.

They further alleged that the proposed Ranga Mantapa would facilitate organisation of several programmes such as Ganesha Festival, Rama Navami, anniversary celebrations and the like, which would disturb the calm and peaceful atmosphere that prevails in the locality and also will be a dishonour to  martyr Prashanth.

Corporator Vanitha Prasanna said that it was proposed to build a Ranga Mantapa after some residents of K.C. Nagar submitted a representation to the MCC in this regard. As such, the MCC had come forward to construct the Mantapa at a cost of Rs.13.5 lakh, she said and added that, however, the plan will be dropped if there were objections.

What the Act says?

Karnataka Parks, Play-fields and Open Spaces (Preservation and Regulation) Act, 1985, clearly states that no buildings or any construction can come up in the parks, play-fields or open spaces. Hence, it is a clear violation of the Act to construct any structure in the Park.

Residents to file petition against construction

Many concerned residents and morning walkers of K.C. Nagar, who use the park every day, have decided to file a petition in the Court challenging the MCC’s move to construct an open air theatre in the otherwise quiet and serene park.

Some residents, speaking to SOM, said MLA Somashekar was   trying to fool the tax-paying citizens in the name of children by just changing the name of Ranga Mantapa (open air theatre) as Makkala Mantapa (children’s stage) when in fact they are building an open air theatre spending Rs. 13.5 lakh.

The residents said that this open air theatre is only going to cause noise pollution and ruin the peace and quiet of the area.