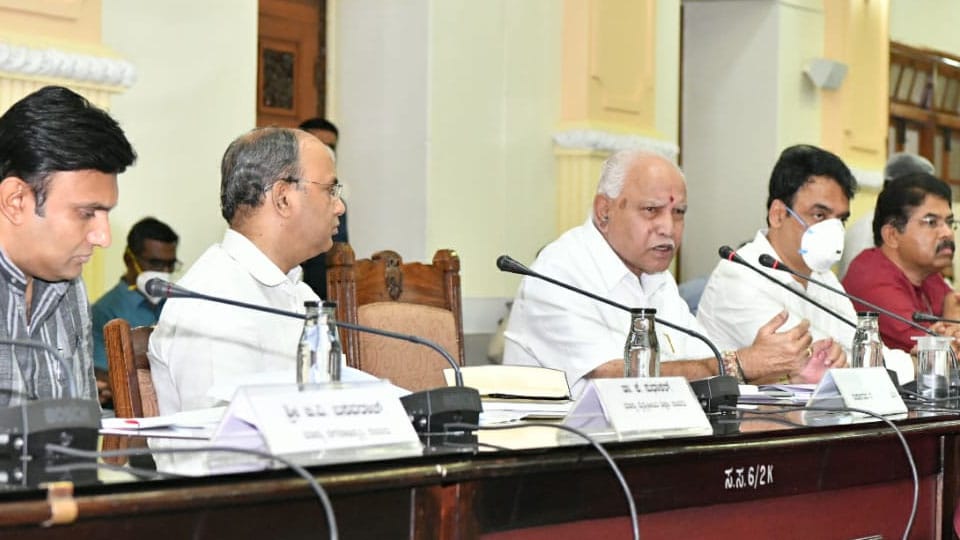 Lockdown extension inevitable if COVID-19 goes out of control: CM

Bengaluru: With the number of COVID-19 positive cases rising by the day, Chief Minister B.S. Yediyurappa said that the lockdown that will be in force till Apr.14, may  be extended further.

Speaking to press persons at his official-residence ‘Kaveri’ here yesterday, Yediyurappa  said that the co-operation of the people was most vital for stopping the spread of the virus.

Hinting that lockdown regulations may be relaxed in 14 districts where there are no Coronavirus positive cases, he said that it is likely that the lockdown may be extended in districts declared as ‘Hotspots.’

Appealing the people to stay home and be safe, Yediyurappa said that it was very important for the people to maintain social distancing in order to stop the spread of the virus. Clarifying that there was no question to open Kerala border, the CM defended the State Government’s decision to close the Karnataka-Kerala border, saying that the closure has largely prevented the spread of the virus in Karnataka’s border districts of Mysuru, Kodagu and Dakshina Kannada. He further said that he has explained the Government’s stand in this regard to former PM H.D. Deve Gowda and Opposition Leader Siddharamaiah.

Pointing out that Coronavirus knows no religion or community, Yediyurappa warned of action against those targeting a religion for the spread of the virus.

Highlighting the Government’s response to the plight of farmers during the lockdown, the CM said that the farmers are allowed to transport their produce to the markets and at the same time, he has instructed the officials to ensure that there is no disruption in the supplies of seeds, fertilisers and pesticides.

Defending the appointment of Primary and Secondary Education Minister Suresh Kumar as COVID-19 Spokesperson as the Minister is easily available in Bengaluru, Yediyurappa dismissed speculations on the rift between Health Minister Sriramulu and Medical Education Minister Dr. K. Sudhakar as baseless.