Home » Columns » Abracadabra By K. B. Ganapathy » Long March of a Malayali Boy From Darkness to Light —1 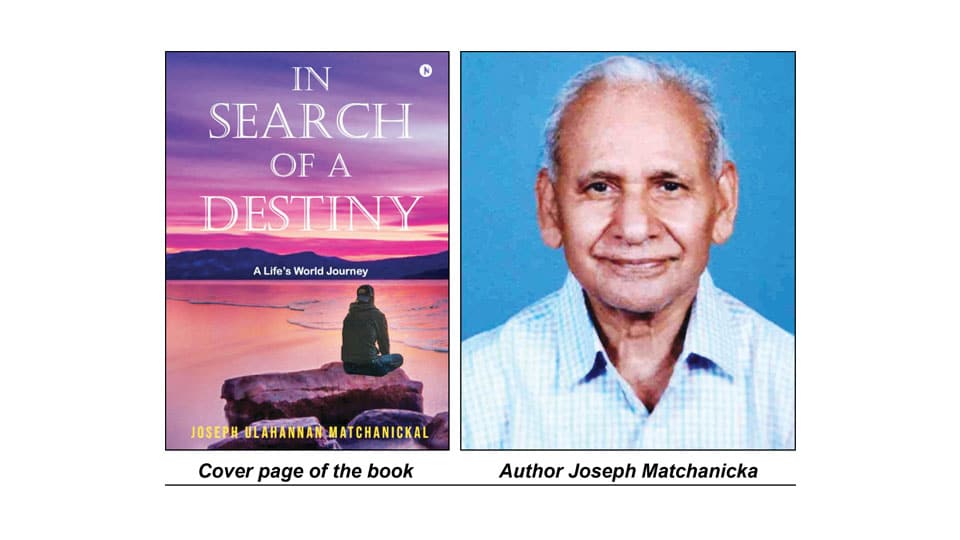 Long March of a Malayali Boy From Darkness to Light —1

You are the architect of your life — Swami Vivekananda

Recently I got a book titled ‘In Search Of A Destiny’ with a hangline ‘A Life’s World Journey.’ The title seemed rather an abstraction and the hangline bombastic. Author’s name a web of gossamer made of english alphabets! Joseph Ulahannan Matchanickal. The text reveals that his Kerala Catholic Christian parents named him, when he was baptised, as Uduppan, a local Christian name for Joseph.

When I completed reading the book, I was left wondering about the other two parts of his name. Let it be.

In the prologue to the book, the author has a caveat to his readers: “Please note that this is not an autobiography; it is just a novel based on a real story line around my life…”

Well, absolutely he does not know how to write a novel — the structure, plot, prose style, narration leading to a denouement; a happy or sad or surprising end. Here it is all about I, mine, my family, my life in Kerala till age 21 (1969), the grinding poverty with nine siblings, uncles, aunts and cousins making-up a huge family till he retired and settled in Kerala.

He writes about the hurdles and hardships he faced to pursue his education, as the second of his siblings. As a marginal land-holder, his parents had to go for work as labourers to feed the huge family. Apparently, as Catholic Christians, family planning was taboo, despite the suffering of such severe, degrading poverty. There were no characters to weave the story and the author himself is the protagonist. Therefore, it is a misnomer to call this book a novel, but it is the privilege of the author to call his work as he wants and so be it.

It is an autobiography, honestly written and a page- turner for one like me who is familiar with Malayalis and Kerala. The author being my contemporary in age, I could, at different levels of his journey, relate or recall my own journey in life.

Reading about his journey in life, I found that at birth he was given a sour lemon by destiny but using his intelligence he made a tasty, enjoyable sarabath, sweet lemon juice, out of it. He did not brood or complain or lapse into a state of despair and despondency. He became the architect of his own destiny, taking hold of the worst adverse circumstances in his early life. Amazing. But, he was lucky to have had friends, relatives and Good Samaritans to help him in times of need.

That, as the famous Supreme Court Advocate Fali S. Nariman says in his autobiography ‘Before Memory Fades…’, is luck and also turning points in his life. When a situation seemed impossible, surprisingly it became possible for him.

He gets a degree in Chemistry from Loyola College, Madras and then gets Master’s Degree in Chemistry from St. Joseph’s College, Trichy. Uncle Kurian helps him in his pursuit of studies. Then he takes up job as school teacher and later as college lecturer in Calicut. It is here he happened to apply for the Fulbright Scholarship of USA. A turning point made possible by his friend Alian who had married his cousin Lissy.

In the meanwhile, he was busy, finding free or low-cost boarding schools for his four younger siblings. To his luck, all of them were good in their studies.

It is a fantasy reading through the narration about his interview for the Fulbright Scholarship from US. He had not prepared to answer the most important question: What you want to study in US? He says: Science Education. But Fulbright Grant did not offer scholarship in that field. That sealed his fate. Well, not yet. He was called in again by the Fulbright Selection Committee. He was selected. How he was selected is a miracle. Luck. It was a turning point in his life.

There was much bonding in the family; much emotion, much sentiment. There was much love and concern among each member of the family too. And much charity no matter his father often did the vanishing trick to avoid the degrading situation created by poverty and a large family. No wonder when Joseph left for US there was much tugging of the umbilical chord of his mother that matched his own pain of separation. Charity indeed should begin from home. It did in Joseph’s case.

Be that as it may, I was overwhelmed reading about Rs. 10,000 that was needed to carry with him (in dollars) to US. He was selected for the Scholarship but where is this extra money that was huge for those days in 1969. He thought that was the end of his dream. He approached a well-known businessman, father of a student he had taught in high school. But his request was turned down. It was again his friend Alian who came to his rescue. He asked Joseph to approach the Bishop of the Catholic Church, Calicut, an Italian by name Patroni — old man of over 80.