Home » Feature Articles » LOOKING BACK… A Park that grows in beauty 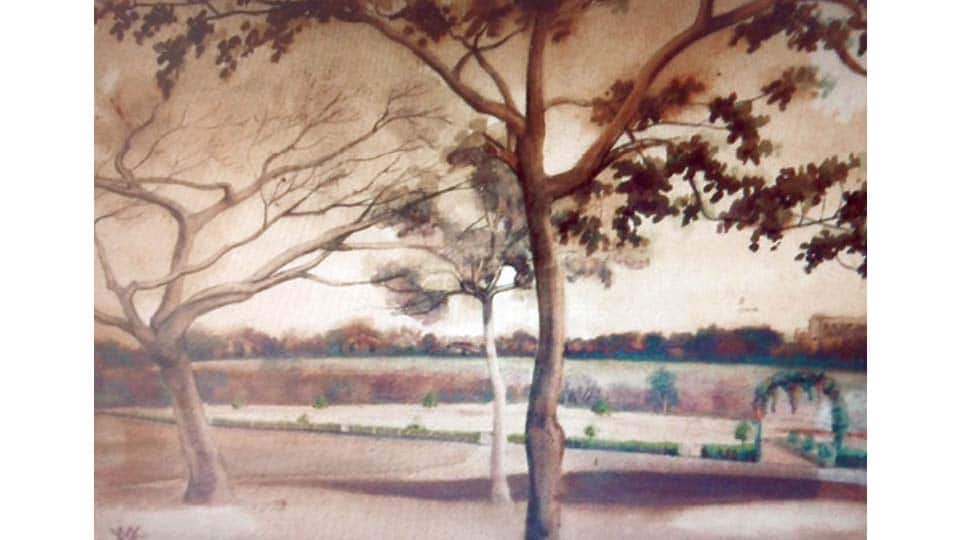 LOOKING BACK… A Park that grows in beauty

Browsing through the computer some days ago, I found a photo of a lost painting which caused me a pang of regret. Many years ago, wanting its broken frame to be repaired, I took the painting to a framer in Mysore city’s Devaraja Market [now threatened with demolition]. After paying the shopman, I carelessly left the parcel by the door. By the time I remembered to go back a little later, it was gone without a trace.

The lost painting was a watercolour by my mother, Mukta, of sentimental value to me. Although she usually specialised in flower studies, this one was a landscape painted around 1942. We lived in one of the Railway bungalows on Krishnaraja Sagara Road adjacent to the residential area of Yadavagiri in Mysore which was called ‘Yadavagiri Extension’ in those days. There were fewer houses then but many plots that prospective homeowners, like my father, bought from the City Improvement Trust Board (CITB) of the Government to build their homes.

Avenue trees had already been planted, mainly with Gulmohar, but some other varieties as well. From the crest of Yadavagiri, the land sloped left, downwards to the railway line where trains chugged away towards Srirangapatna. Much of the land there was stony and wild with a few scrubby trees and one hoary Plumeria [Devaganigile], revered by local folk for its age and sanctity. It still stands, gnarled with age but with a vestigial beauty, outside the R.K. Narayan Museum in Yadavagiri.

Mukta, in her middle years liked to walk around this area armed with a sketch book. Sometimes she would actually take her painting gear and paint on the spot, oblivious to the curious stares of the occasional passersby. The lost picture was painted from a view point on Vivekananda Road looking towards Cheluvamba Park. Past the Park, on the horizon, Mukta has indicated the building called ‘Jaladarshini’ which is now the Government Guest House.

The arch over the entrance of the Park, covered with a creeper, its decorative fronds waving gently in the breeze, is unchanged. The scene brings back memories to me of times when I was taken to  the children’s playground. In a sandy area there was a slide built of cement [colloquially called ‘Jaraguppe’]  and a see-saw. The trellised nursery for plants stands still densely covered with the same creeper of yellow blooms, pot plants are neatly laid out in its green gloom.

The seasons are marked florally, trees blooming in succession; a very clever plan to ensure that at least tree is in flower all the time. The Park has Gulmohars, palm trees and lofty evergreens [called ‘Christmas Trees’ in Mysuru]. The fan shaped ‘Traveller’s Palm’ [Ravenala madagascariensis] stands in the centre of the far lawn. The name was originally given because the leaf bases of the tree store water with which travellers could slake their thirst. The flowering trees, the ethereal mauve-blue Jacaranda, the  pink and yellow of the Tabebuia [Bignoniaceae] are from South America, not indigenous to our country. Both varieties in the Park are annually in bloom in spring months; the yellow one being spectacular, its branches laden with clusters of the golden flowers.

The Park was named after Cheluvajammanni, one of Maharaja Chamarajendra Wadiyar’s daughters. It is said to have been started in the early 1900s. The truncated

photograph of me on the see-saw was taken by my father, an enthusiastic if sometimes inept cameraman! I was wearing a treasured orange and black frock my father brought from his railway travel to Calcutta for my fourth birthday. So now at 84, I can date that playground as being at least my age or more.

The Park has been a part of our daily life for many Mysureans like me. A place to play in as children and, in later years, to sit on a stone bench and think, or walk and meet friends; a green space, a serene space, Cheluvamba Park has aged with beauty. May it continue to be a treasured landmark in our city, entwined in our hearts.