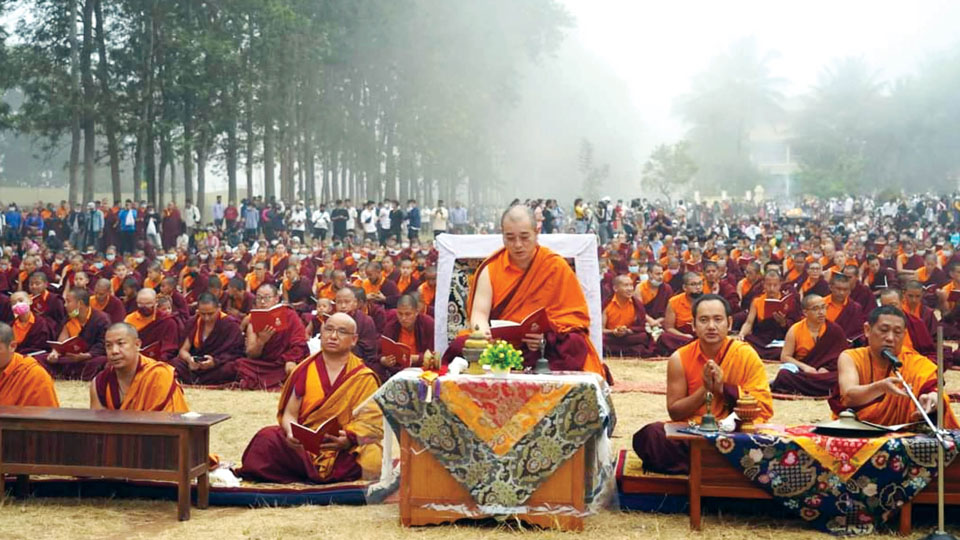 Bylakuppe: The Losar festival celebrated from the first week of March at the Tibetan colony at Bylakuppe in Mysuru District on the way to Kodagu, concluded yesterday with prayers and wishes of long and healthy life for everyone.

Losar marks the beginning of the New Year as per the Tibetan calendar. The main festival of Losar 2149, the Year of the Water Tiger, was observed from Mar. 3 to 6 and the celebrations continued till last evening. As part of the festival, Tibetans living in Bylakuppe visited various Buddhist Temples in the vicinity and offered prayers.

In a statement released this morning by Gyurmed Nyingma Monastery (administration office of Namdroling Nyingmapa Monastery or Golden Temple) regarding Losar said that yesterday dawn, the ‘siddhi’ of ‘Drubchen’ was received.

The Buddhist monks unfurled massive Thangka (Scroll painting) of Buddha Amitayus (The Buddha of Long Life). The main attraction of the Thangka Scroll painting is that the scroll is hand-made, which measures 250 feet in width and 200 feet in length.

The Thangka was created in 2002 and it is unfurled every year in the Golden Temple on the final day of Losar for 30 minutes for the monks and devotees to offer their prayers. A traditional Tibetan music is played in the background after the prayer. This is followed by the majestic ‘Cham Dance’ (Lama dance) by the monks of Namdroling Monastery.

In the afternoon, the empowerment implements of ‘siddhi’ were blessed to the faithful public. The ‘Drubchen’ then ended with aspiration prayers and prayers of auspiciousness. The closing ceremony was performed by lighting of ghee lamps.