Home » News » Love on Stage: Chandan Shetty asks Niveditha “Will You Marry Me?” 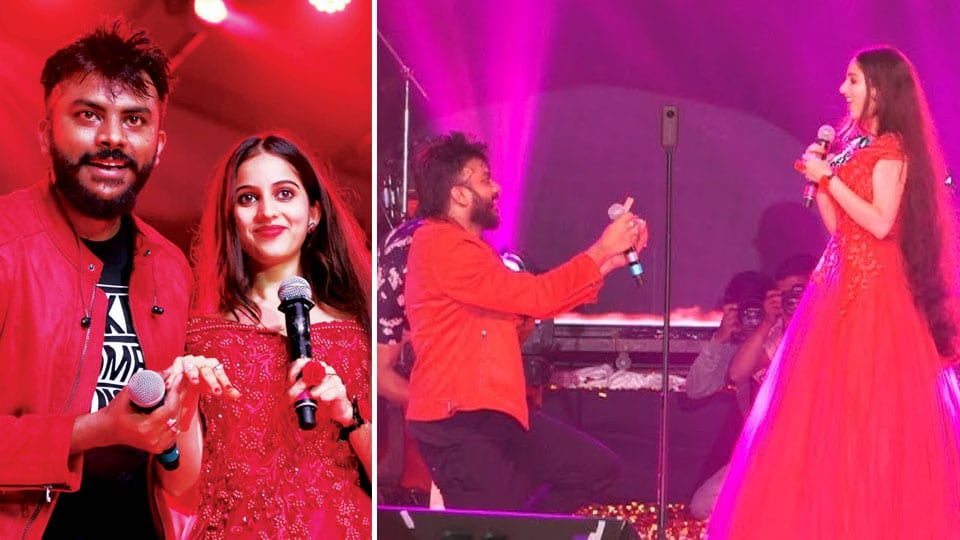 Love on Stage: Chandan Shetty asks Niveditha “Will You Marry Me?”

Mysuru:  The youth and audience at the Maharaja’s College Grounds were in for a surprise during the ‘Yuva Dasara’ last evening as two known celebrities, Chandan Shetty and Niveditha Gowda of Bigg Boss fame, announced their decision on stage to enter into a wedlock.

Rapper Chandan Shetty, during his concert, proposed to Niveditha by asking ‘Will You Marry Me?’ to which she replied ‘Yes and I Love You.’ The two, who had met at the Bigg Boss house, were good friends and rumours were making the rounds about them being in a serious relationship.

Chandan said that he wanted to propose to Niveditha in a foreign location but later decided to ask the important question in front of a large audience who loved him and on a big stage. “I have spent 105 days with her at the Bigg Boss house and there is no better person who could understand me. This is such a beautiful day with our parents also being present along with people whom I love. Hence, I thought it was a right time to ask the all important question of my life,” he added.

While the audience approved the proposal and cheered Shetty and Niveditha, the issue was not taken lightly by some who commented on various social media platforms that Chandan Shetty should have proposed to her privately instead of using Dasara platform for the same. When media persons asked District Minister V. Somanna for his reaction, he said that the Dasara Committee had no prior information as it happened suddenly on stage.

“Misusing the public stage for a private affair is wrong. However, action would be initiated against the duo as per law. I  have also asked SP C.B. Ryshyanth to issue a show-cause notice,” said the Minister.

Following an outrage in the media and District Minister expressing his displeasure, Chandan Shetty sent out a video message stating the he was ready to tender an apology for the incident.