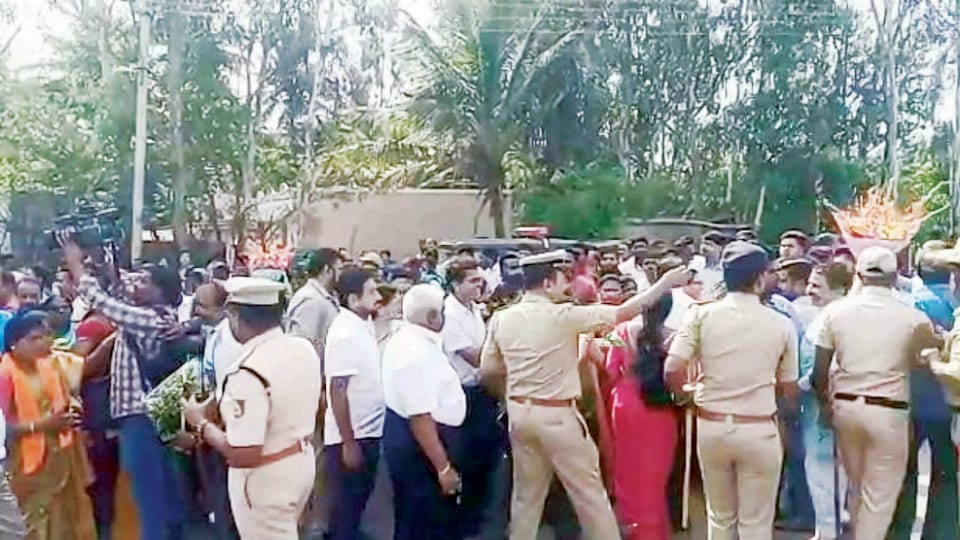 Mysuru:  In his second visit to Mysuru, Deputy Chief Minister Dr. C.N. Ashwath Narayan was given a rousing welcome by over a 1,000 BJP party workers at the Columbia Asia Junction. Party workers, fans and supporters, holding garlands and flower bouquets, literally mobbed Ashwath Narayan and everyone wanted to garland him. This, however, led to chaotic scenes at the busy junction of four  roads where vehicles constantly come from all sides.

Ashwath Narayan, the three-time Malleswaram BJP MLA, who rose to become a Deputy CM, had come to the city last week and had performed puja to Goddess Chamundeshwari atop the Chamundi Hill. Today, Ashwath Narayan’s convoy arrived at the Columbia Asia Junction at around 10.40 am.

Hours before the convoy arrived, over 1,000-strong crowd had assembled at the junction waiting for the Dy.CM. As soon as his vehicle was spotted, fans rushed onto the road to welcome him. Holding garlands and the traditional Mysore Peta, party workers mobbed the vehicle.

Responding to the fans, Dr. Ashwath Narayan got down from his vehicle and the elated fans pushed around each other in a bid to garland and welcome him.

This welcoming spree went on for some time and the Police had a tough time to control the crowd. Meanwhile, traffic piled up on all sides and vehicles were stranded for more than 30 minutes. The attempt of the Police to disperse the crowd to clear the traffic irked the party workers and some of them got into an argument with the Police.

Finally, the Police were able to disperse the mob by requesting Dr. Ashwath Narayan to get into his car. The Dy.CM was taken to Government Guest House from where the convoy proceeded to Chamundi Hill. After praying to Goddess Chamundeshwari, he spoke to reporters and said that Information Technology companies in Mysuru and Bengaluru will get a boost.

Dr. Ashwath Narayan, who also holds the Higher Education and IT/BT portfolios, said that the Government will soon take a policy decision that will enable IT/BT companies to use newer technologies and come up with renowned services and products.

On disqualified MLAs, he added that all of them were with BJP and they will be suitably accommodated once the Supreme Court pronounces its judgement. Dr. Ashwath Narayan, was, however, silent when asked about jailed Congress leader D.K. Shivakumar.

The Deputy CM later visited Maharani’s College where he interacted with the students.