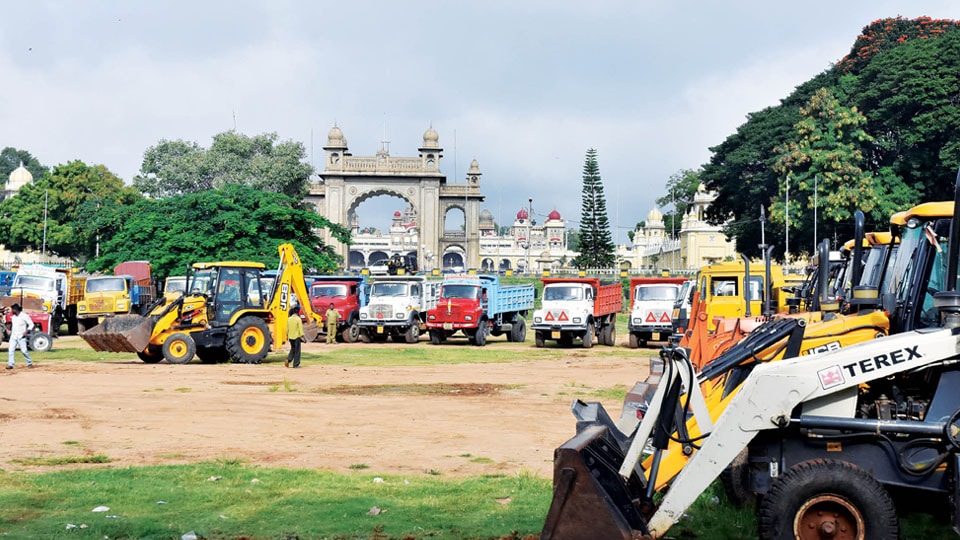 Mysuru: From today, the city’s streets will be full of civic workers in olive green aprons, wearing rubber gloves and holding brooms and dustpans. Reason: A massive five-day cleaning campaign was launched this morning with Dasara just nine days away.

The campaign was launched by Mysuru District Minister V. Somanna from Doddakere Maidan and the drive will cover all 65 Wards of Mysuru City Corporation (MCC). Somanna said that the drive was aimed at keeping city clean for Dasara during which lakhs of tourists from across the country and abroad will be visiting the city.

Pointing out that the entire city will be covered in the campaign and that the drive will end on Sept. 25, Somanna thanked the contractors for extending their whole-hearted cooperation for the drive by sending their earthmovers, tractors, bulldozers and tippers.

Noting that construction debris, roadside waste, bushes and shrubs grown in vacant sites, dumped waste, drainages etc., will be cleared during the five-day drive, Somanna called for the support of all to make sure that the campaign ends with huge success.

MCC Commissioner Gurudatta Hegde, speaking to Star of Mysore, said that more than 100 vehicles lent by the contractors are being used for the cleaning drive. Pointing out that apart from over 2,000 Pourakarmikas attached to the MCC, the civic body has appointed nearly 380 Pourakarmikas for Dasara cleaning duties, Hegde said that the cleaning drive will ensure that the city is cleared of waste and debris for Dasara.

He called for support from all sections of the society for the total success of the drive. All the debris and waste collected in the drive will be dumped at an 8-acre plot belonging to the MCC at Kesare (Rayanakere) along the Ring Road. Mayor Pushpalatha Jagannath, former Mayor Sandesh Swamy, Corporator M.V. Ramprasad, MCC Contractors’ Association office-bearers and others were present.

With the MCC launching the special drive, the contractors have lent over a hundred waste cleaning, collection and dumping vehicles. The contractors have also deputed 108 labourers for assisting the Pourakarmikas in the loading and unloading of waste and debris. Other Government bodies such as MUDA, KUWS&DB, Slum Development Board and Housing Board too are part of this five-day drive.

Nagendra miffed at not being invited

MLA Nagendra, who arrived at Doddakere Maidan along with Minister Somanna, took Mayor Pushpalatha Jagannath and MCC officials to task for not inviting him for the campaign launch. He told the Mayor, “You people do not have the courtesy to invite the MLA to an event like this. I am the MLA of Chamaraja and this Doddakere Maidan is in my Constituency.”

Intervening, Somanna questioned the Mayor and officials as to why the MLA was not invited to the event despite the drive being finalised three days ago. An upset Nagendra questioned the officials, “You decide the event three days back and I am not informed. 10 minutes ago an officer called me and asked me to come. How can you expect me to rush for the event in 10 minutes,” he questioned. While the officials were at loss of words for MLA’s outbursts, Minister pacified Nagendra and the event went on.