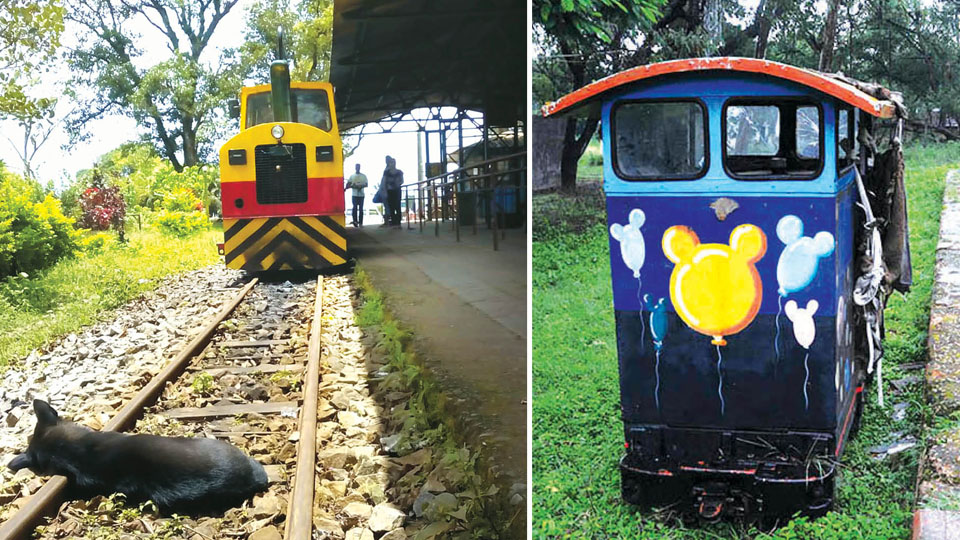 Madikeri: Mysuru has a sizable population of people from Kodagu and for Mysureans too, Kodagu is a favourite nearby hill station to enjoy their holidays in cool environs. Apart from this, Mysuru and Madikeri (capital of Kodagu) has one thing in common – defunct toy train. While Mysuru’s famed toy train is located in Bannimantap at Jawahar Bal Bhavan, Madikeri’s toy train is located at Raja’s Seat, the place most frequented by tourists.

The toy train in Madikeri that was running for nearly 25 years has stopped chugging and even the water fountain nearby has stopped functioning. Both these were located near the Raja’s Seat, the must-visit tourist destination in Madikeri. The train has now been placed inside a shed with tracks being covered with weeds and wild growth. The tracks provide evidence that a train was once running here.

The main reason for the ‘Tourist Express’ (the name of the Madikeri toy train) to cease operation is the nature’s fury that hit Kodagu district in August this year. Also called ‘Cauvery Express,’ the train was quite popular among children and even adults.

People used to come to take a ride in this train that used to cut through mountains and pass through ravines of Madikeri. Raja’s seat was its starting and ending point and the train used to circumambulate the hilly terrain giving the occupants breath-taking views of the mountain ranges. People and children on board the train used to scream in joy as the train winded its way on the tracks almost touching the mountain ranges.

The sylvan surroundings of Raja’s Seat welcome everyone with open arms. And for years, the jolly ride in the toy train has brought immense joy to children. However, this feeling was not restricted to the children alone. The elderly, newly married couple and young lovers have all enjoyed the ride amidst the magnificent beauty of Raja Seat and the valley.

After the selfie craze started, everyone used to click pictures sitting in the toy train. Sadly, all this has become a thing of the past now. Since the last three months, the after-effects of landslides and floods have hit Cauvery Express too.

Due to heavy rains, the railway track on which the Express train runs has started rusting and the wooden reapers have been infested with termites. Even the tourist inflow has dwindled following the devastation and the timetable of the running of the train has been removed from its place. There were hopes that people would come at least during Dasara and experience the joy ride in the toy train. Even this hope has been belied as the officials concerned did not take any initiative to revive the train.

The toy train was introduced nearly 25 years ago in Madikeri. Before it was shifted to Raja Seat, it was making a round of Madikeri Golf Course. Now, the track has not been maintained for months and weeds have grown on them. 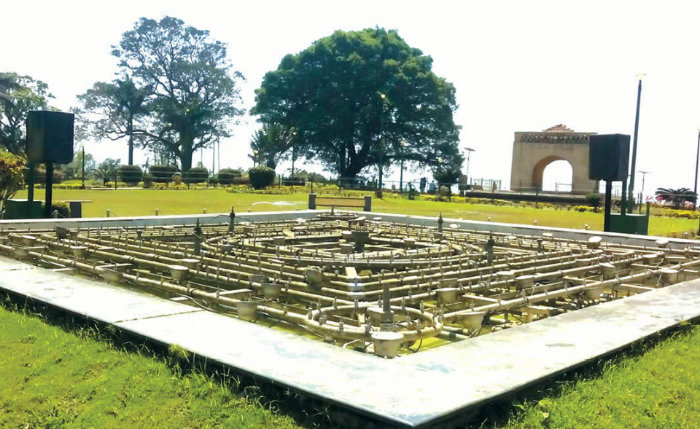 People are at least hoping now that the Madikeri CMC and the Tourism Department wake up and do something about the toy train and musical fountain and restore it to its past glory so that the tourists and visitors can once again enjoy the joy ride and listen to the lilting fountain music.