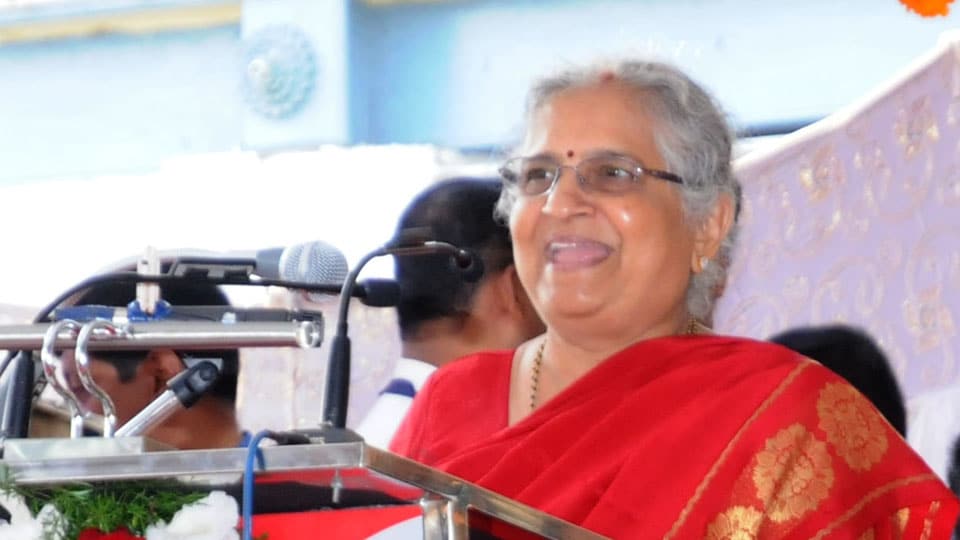 Philanthropy at its most generous: Sudha Murty announces Rs. 25 crore aid for Kodagu

Mysuru: ‘Giving back to the society’ has been the policy of the Infosys First Family, with Founder N.R. Narayana Murthy and his wife Sudha Murty taking the lead.

Well-known for various philanthropic gestures, Sudha Murty, the Chairperson of Infosys Foundation which is the charity arm of the IT bellwether, today announced that the Foundation will donate Rs. 25 crore for rehabilitation works in flood-ravaged Kodagu District.

After inaugurating the 10-day Dasara atop Chamundi Hill this morning, Sudha Murty, also a prolific writer, said that Rs. 25 crore will be exclusively for rehabilitation works including construction of houses for those who have been rendered homeless.

“Infosys has grown from just Rs. 10,250 and today it is an IT giant, with headquarters in Bengaluru and providing jobs for lakhs of people worldwide. This would not have been possible without the support of the people of Karnataka, the successive governments and the local talent pool. We believe in giving back to the society and now our energies are focussed on that,” she said and added, “Infosys will construct houses for the people in Kodagu and the government can provide other facilities such as roads and drinking water.”

“Infosys will construct houses for the people in Kodagu and the government can provide other facilities such as roads and drinking water. The Foundation will take up work on laying a walking path at Hebbal Lake in Mysuru at a cost of Rs. 10 to 15 crore. The Foundation has already spent Rs. 38 crore for the development of the Hebbal Lake that includes silt removal, beautification, laying of stone benches, etc.,” she said.

Recalling the contribution of the Wadiyars for Karnataka unification, she said that Wadiyars were the gift of the land. “Without Wadiyars, Karnataka would have been further divided and shared among other States. They were the unifying factor,” she added.

7 COMMENTS ON THIS POST To “Philanthropy at its most generous: Sudha Murty announces Rs. 25 crore aid for Kodagu”