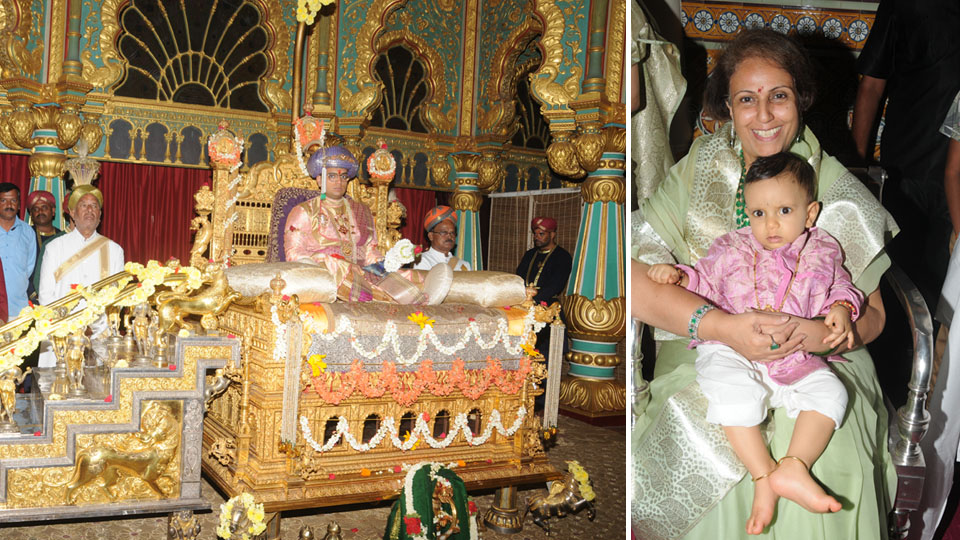 Mysuru:  The Khas Durbar or the Private Durbar, an annual feature of the beginning of Dasara Celebrations at the Mysore Palace, began here this morning with the titular head of the royal family Yaduveer Krishnadatta Chamaraja Wadiyar ascending the Golden Throne between 11.45 am and 12.02 noon at the magnificent Durbar Hall.

The rituals for the private durbar began as early as 4.30 am with the oil bath shastra to Yaduveer. Between 5.30 am 6 am the Lion’s heads were fixed on the golden throne. The Golden Throne (Simhasana) and Bhadrasana (Silver throne) were assembled on Oct. 4. While the Simhasana is kept at the Durbar Hall, the Bhadrasana is kept at the Kannadi Thotti.

After the rituals, Kankana was tied to Yaduveer between 7.02 am and 7.45 am. According to tradition, once Kankana is tied, his movements are restricted to the Palace for ten days. The rituals continued at Kodi Someshwara Temple where Pattada aane (elephant), Pattada Kudure (horse), Pattada Hasu (cow) and Pattada Onte (camel) were all brought in, followed by a group of married women (Sumangalis) carrying Kalashas, between 10 am and 10.45 am. Then they were taken to the Savara Thotti where the puja was performed to Yaduveer and the Pattada aane, kudure, hasu and onte blessed him. 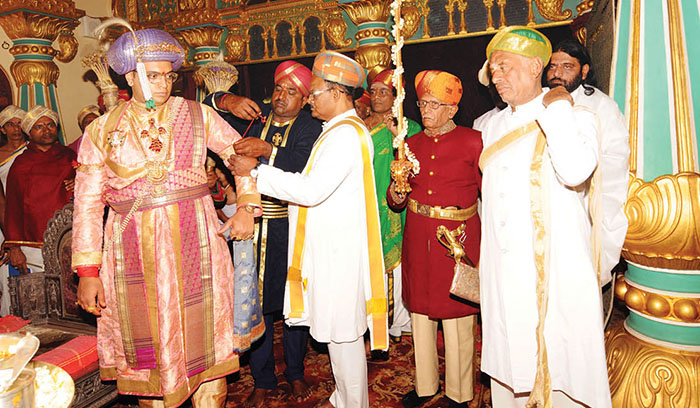 Kankana being tied to Yaduveer.

Between 10.55 am and 11.15 am, the Kalashas were taken to the Durbar Hall and some more rituals performed. After performing all pujas, Yaduveer ascended the throne between 11.45 am and 12.02 noon. Before that as he walked up to the throne followed by the Durbaris on either side in the Durbar Hall, the cries of ‘Bahu Parak’ rent the air. Yaduveer, before ascending, circumambulated the throne three times. Soon, the priests from Chamundeshwari Temple atop the Chamundi Hill, Ranganathaswamy Temple in Srirangapatna, Cheluvarayaswamy Temple in Melkote, Nanjundeshwara Temple in Nanjagangud and the temples inside the Palace like Ganapathy Temple, Kote Anjaneswamy Temple, Prasanna Krishna Temple, Trineshwara Temple, Bhuvaneshawri Temple, a total of 23 temples in all, offered Prasada and ‘proksha’ (sprinkling of holy water on the head) to Yaduveer. 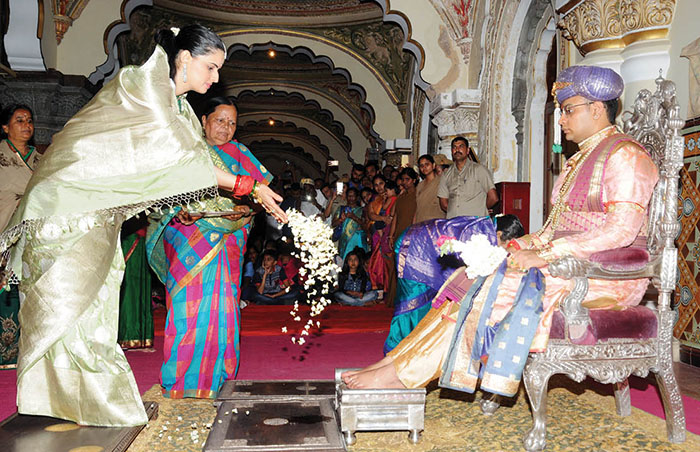 He stood in attention before sitting on the throne to the tunes of the Palace anthem ‘Kayo Sri Gauri,’ played by the Police Band. They also played a few of the compositions of Jayachamaraja Wadiyar.

The Private Durbar on the first day ended at 12.02 noon. Pattada Aane Vikrama, Nishane Aane Gopi and elephants belonging to the Mysore Palace Seetha, Preethi, Chanchala and Ruby participated in the rituals apart from four camels, two cows and one horse. 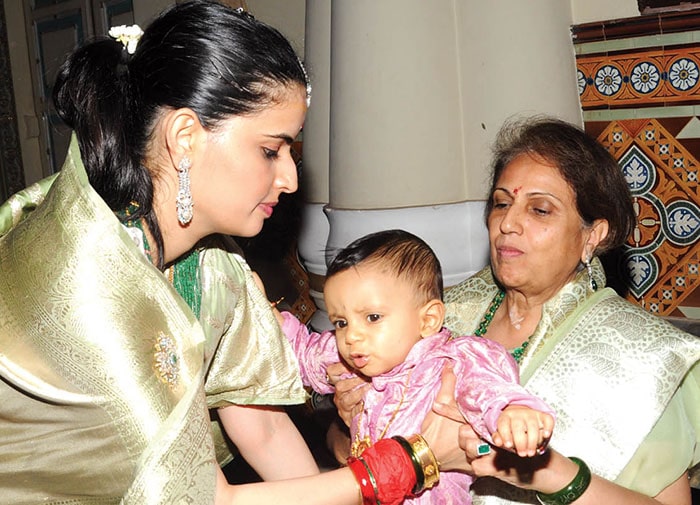 Royal baby Aadyaveer with Trishikha and Pramoda Devi, who are wearing similar-looking sarees.

Yaduveer’s wife Trishikha Devi Wadiyar, his mother Pramoda Devi Wadiyar, writer and Infosys Foundation Chairperson Sudha Murty, Infosys Founder N.R. Narayana Murthy and others were present. From tomorrow the Private Durbar will be held both in the morning and evening.

There were strict restrictions for entry to the public even though a few from the families of the Police and bureaucrats had managed to gain access. However, only a select media persons were allowed.