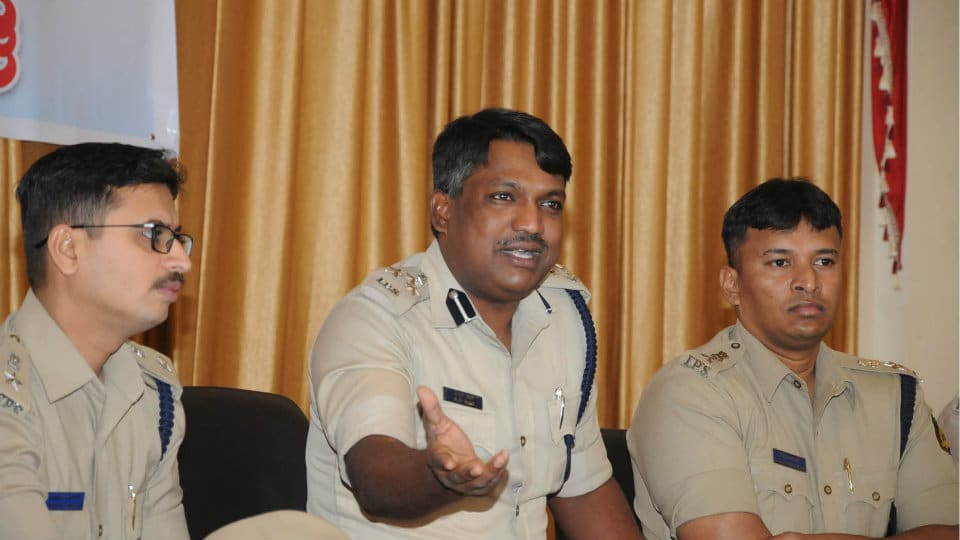 Mysuru: The Mysuru City Police, who have made foolproof security arrangements for the smooth conduct of Dasara festivities including the grand finale ‘Jumboo Savari,’ will also be providing the same security for the Dasara Cultural Procession to be held on Oct. 14 which will be conducted by the Dasara Procession and Torchlight Parade Committee.

Addressing a press meet in city last morning, City Police Commissioner Dr.A. Subramanyeswara Rao said that as many as 3,000 to 4,000 people including artistes, college students, various Police Wings will be participating in the cultural procession.

Continuing, he said that over 1,000 students of various colleges in Mysuru district wearing traditional dress and 500 youth who had taken  part in Yuva Sambhrama are taking part in this procession.

The procession will begin from Mysore Palace premises at 3.30 pm and will pass on the Jumboo Savari route before culminating at the Torchlight Parade Grounds in Bannimantap.

The procession includes march of caparisoned elephants (without the elephant carrying the Golden Howdah in this procession), 40 folk troupes (each team comprising 10 members), artistes from Mysuru and other districts are also participating in this cultural procession.

He said that the rehearsal will be held at 7 pm and added that as thousands of people are expected to witness the rehearsal,  elaborate security arrangements have been made at the venue.

A separate contingent of Police personnel comprising both seniors and juniors will take care of VIP security, he said and added that special barricades will be erected on the Jumboo Savari route to prevent the crowd comming on the procession route on the grand finale day.

Police Department has rounded up rowdy- sheeters and other anti-social elements as a preventive measure and Police personnel in uniform as well as mufti (in plain clothes) will be deployed in crowded areas to prevent pick pocketing, lifting of bags and suitcases, the Police chief said.

The Department has also installed the 86 Close Circuit Television Cameras (CCTV) including 56 permanent CCTVs installed at vantage points.  Additional CCTVs are installed along the five kilometre stretch of the Jumboo Savari route from Mysore Palace to Bannimantap Grounds and Raja Marga surrounding areas, he said.

Traffic ban and parking facilities: In the backdrop of the commencement of Dasara festivities, City Police have made some changes on traffic movement on some roads in city and have made parking facilities from Oct. 10 to 19 for the public and visitors.

Movement of KSRTC buses from Rural Bus Stand has been changed. Temporary bus stand has been made for city buses on the outskirts of city on Oct. 18 and 19 and for the benefit of the public, parking facilities have been made near the venues where Dasara programmes will be held.