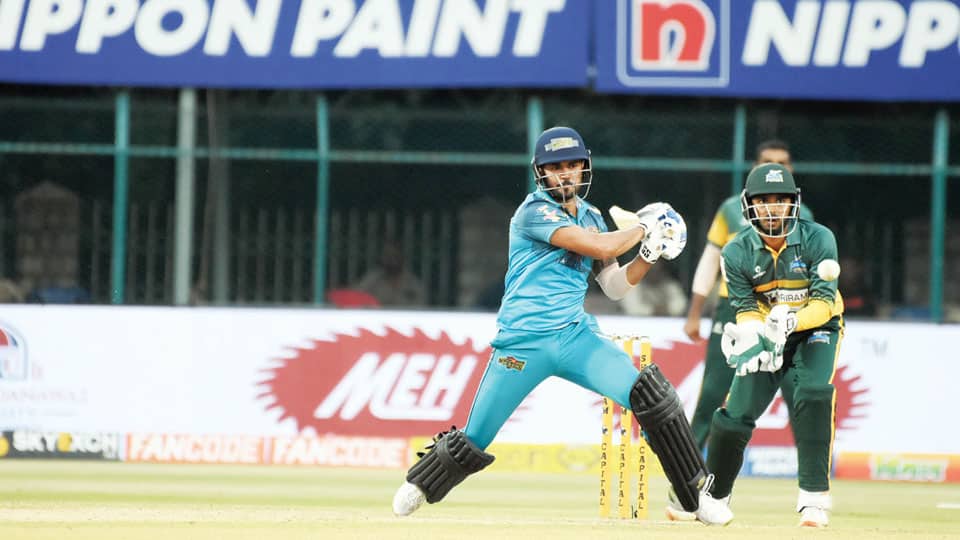 This was Gulbarga side’s first win in the competition as even a five-wicket haul for D. Avinash wasn’t enough to get the Strikers over the line.

Batting first, Shivamogga Strikers lost Stallin Hoover off the second delivery of the innings, before Rohan Kadam and Siddharth thwarted Gulbarga Mystics’ attack. Both Rohan and Siddharth were watchful to start with, before picking up the pace, just after the powerplay, with the spinners being taken to the cleaners briefly.

Rohan scored 53 from 41 deliveries, smashing three boundaries and two sixes while Siddharth at the other end also added 53 from 51 balls, collecting four boundaries and a six during his stay. The duo put on a solid 108-run stand to not only steady the ship but also laid the platform for a flourish in the final overs of the innings.

In response, the Mystics got off to a quick start with Devdutt Padikkal holding down one end while Jeswath Acharya went on the attack. Padikkal was the first to depart for 9 in the 5th over, after which Jeswath and Rohan Patil went about building the innings. However, Jeswath could not kick on and was dismissed for 30 from 17 deliveries. Rohan Patil managed to add 28 to the cause before captain Manish Pandey and Krishnan Shrijith stitched together a 32-run stand before the latter made the walk back to the pavilion.

While Manish was around the Mystics had every chance of making the chase, but he lost another partner soon as Manoj Bhandage was sent back for 5. And a few deliveries later, Bangalore Mohith followed suit for 1, leaving the Mystics in a spot of bother.

In the 18th over, Manish completed his fifty, with the game on a knife edge. But right after, there was another a twist as Manish was dismissed for 50 from 36 deliveries. However, Ritesh Bhatkal wasn’t giving in and the equation came down to 4 needed in the final over. C.A. Karthik finished off the game with a boundary, giving the Mystics a much-needed win.

The Hubli Tigers’ captain Abhimanyu Mithun was in fine touch last evening, playing with panache, as he hammered 51*off 22 deliveries to lead his side over the line by 4 wickets against the Bengaluru Blasters, by the VJD method. Just when all seemed lost, Mithun stepped up to the plate with an innings that will be long remembered in the history of Karnataka cricket.

Put into bat first, the Bengaluru Blasters lost L.R. Chethan in the second over, before captain Mayank Agarwal took charge, along with K.V. Aneesh. The duo put on a quick 18-run stand before Aneesh departed for 14.

Mayank had Suraj Ahuja (20) for company and even though they found it tough to get the momentum going against the Hubli bowling, they put on 45 crucial runs, to give the Blasters a solid platform at the midway stage.

Mayank by now was starting to get his strokes going and it could have spelt danger for Hubli, who though pegged the Blasters back with the wicket of Aniruddha Joshi (8). Restricted by the regular fall of wickets, the captain looked to up the ante but fell for 43, just as the team’s 100 was approaching. J. Suchith (12*) and Shivkumar Rakshith (15*) added a crucial 25 runs before rain forced an early close of the first innings. For the Tigers, Saurabh Srivastav picked a couple of wickets as the Blasters managed 119/5 in 16 overs.

Chasing 137 in 16 overs, the Tigers had a quiet start, much like the trend so far in the tournament, losing Luvnith Sisodia (6), Liyan Khan (6) and Tushar Singh (0) in the first three overs of the innings.

B.U. Shiva Kumar and Shishir Bhavane (16) steadied the ship over the next few overs, before the latter was dismissed looking to score quickly in the 7th over with the score on 48. Shiva Kumar was the next to depart for 30, which meant the Tigers had lost half their side. Sagar Solanki then added 13 more to the cause, keeping his side in the mix in what was turning out to be a thriller.

But that’s when captain Abhimanyu Mithun got into the act and clobbered a couple of sixes in the 13th over, relieving some pressure for the Tigers. Mithun continued to hammer the bowling, as the crowds cheered on. The Tigers skipper smashed 51 off 22 deliveries, hitting five sixes and two boundaries. Mithun finished off the chase with a boundary.