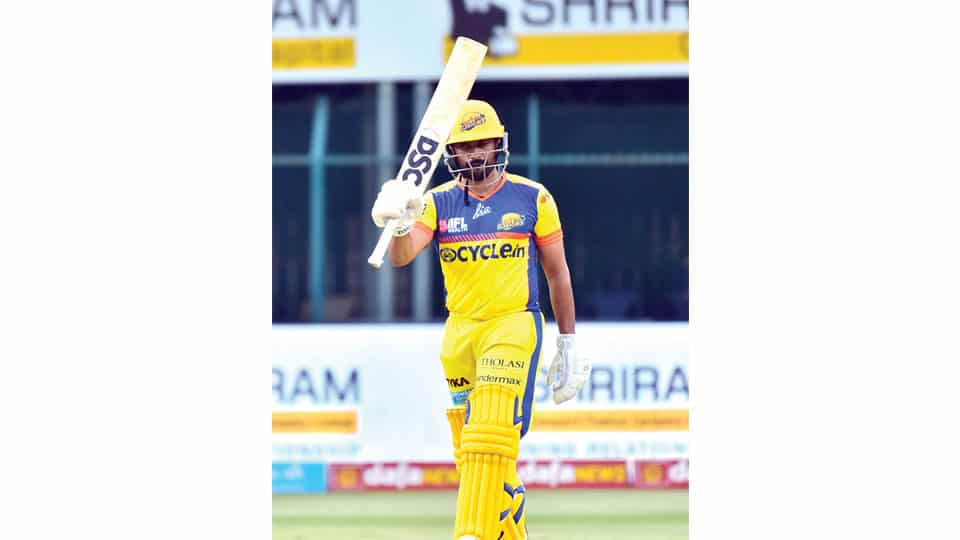 Batting first, the Hubli Tigers, who won a thriller on Tuesday, lost B.U. Shiva Kumar (6) early, however that did not do anything to slow down Luvnith Sisodia, who was picking up boundaries at will. Sisodia’s attacking approach drove the Tigers’ batting in the powerplay, but just as he seemed set for a big one, he was dismissed for 38, having hit 9 boundaries.

After the powerplay, Liyan Khan and M.G. Naveen looked to keep the momentum going, but the latter was knocked over for 5, before Shishir Bhavane had to be carried off due to a knee injury, picked up while looking to take a second run.

Midway through, the Tigers were 66/3 with Khan and Sagar Solanki looking good. However, just as the 32-run stand was picking up steam Solanki was castled for 8, Khan was next out for 26 and Abhimanyu Mithun followed for 7, unable to recreate yesterday’s heroics.

Tushar Singh put the long handle to good use, adding 36 to the cause, pushing the Tigers’ total to a fighting 140/6 after 20 overs.

In response, the Mysuru Warriors, with the home crowd cheering them on, got off to a solid start as captain Karun Nair and Nihal Ullal settled in well. Both batters were happy to not force the issue and waited to attack the bad deliveries.

looking a little lost for ideas. The batters brought up the half-century stand soon after and continued to chip away at the target. As the midway mark approached, Karun picked up the pace, bringing the equation down to 58 needed in the last 10 overs. In the next over, Karun completed a well made fifty off 31 balls, and then out he came dancing down the track or went down on one knee to dispatch the bowlers with ease.

As Karun upped the ante, the Tigers’ shoulders dropped, and soon enough the openers had finished off the task in 16th over.

Nikin Jose scored a brilliant half-century for Mangalore United, single-handedly taking them home at a canter against the Shivamogga Strikers, by 8 wickets. Nikin was unbeaten on 85 when Amit Verma finished off the game with a monster six in the 18th over.

Having opted to bat first, the Shivamogga Strikers made a brisk start with Rohan Kadam on the attack from the get-go. However, Vinay Sagar (6) and Siddharth (7) failed to keep him company for too long which put pressure on the Strikers.

B.R. Sharath and Kadam then got together and not only steadied the ship but also put together a 52-run stand which set the Strikers on their way. At 82/3 in the 12th over, the Strikers seemed set for a strong finish. Kadam completed his second consecutive half-century in the tournament soon after, and had Stallin Hoover for company. The duo put on 43 runs for the fourth wicket before Kadam was dismissed for 64, having hit five fours and three sixes in his 49-ball knock.

In response, Mangalore United got off a bad start, losing captain R. Samarth in the second over for 2, with the score on 3. But that would be the only bit of joy for the Strikers, for a while, as Macneil Noronha and Nikin Jose took charge. The duo absorbed the pressure and then picked up the scoring rate, almost touching 8 runs an over when the partnership of 58 was broken. Noronha was the second to depart for 27, while Nikin had Amit Verma for company now.

While Amit went on the attack from the get-go, Nikin chipped away and brought up his fifty in the 13th over, before he cut loose as Mangalore moved into the box seat. Nikin, who was dropped twice right after he got his fifty, was driving the Mangalore chase along at good clip. Amit had the best in the house as he watched Nikin tear apart the Tigers’ bowling. Nikin finished unbeaten on 85 off 56 deliveries, hitting five fours and four sixes, with Amit Verma scoring 41*.