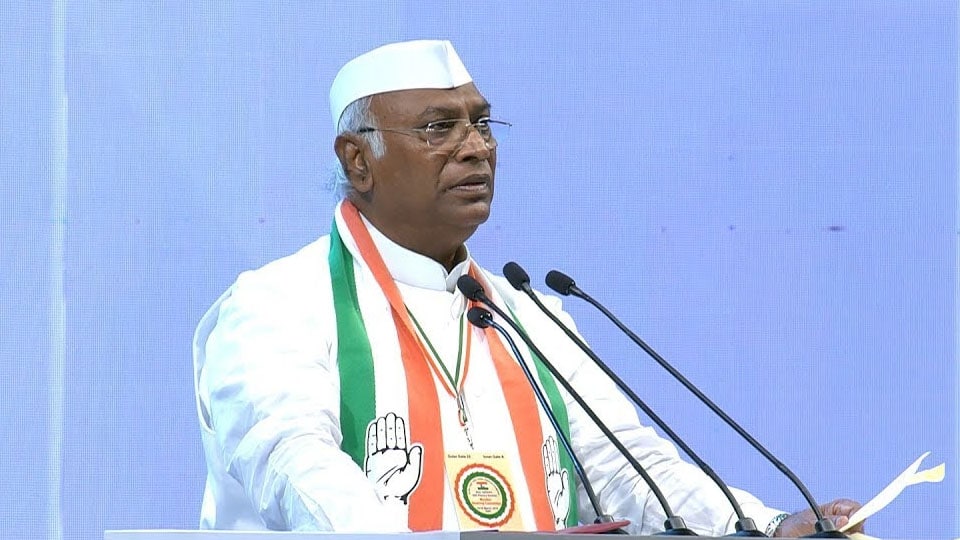 Kalaburagi: Shat-tered by the rout in the 2019 Lok Sabha polls, the 133-year-old Congress Party is said to be mulling on nominating Mallikarjun Kharge, an influential Dalit leader from Karnataka, as the new AICC President.

Following the humiliating defeat in the just concluded Parliamentary polls, AICC President Rahul Gandhi has offered to quit the post. Rahul Gandhi, who himself was defeated in Nehru-Gandhis’ family stronghold Amethi in Uttar Pradesh, is said to be determined to quit the post, taking moral responsibility for the Party’s poor performance.

Even as Rahul is unwilling to take back his resignation, despite fervent appeals by senior Congress leaders and Party State Units, the Congress High Command is said to be seriously considering Mallikarjun Kharge, a veteran political war-horse from Karnataka, to head the Party at this crucial juncture.

Kharge, who was effective as the Leader of the Congress Parliamentary Party (CPP) in the previous Lok Sabha (2014-19), has a long political experience spanning over four decades.

An able leader from Kalaburagi, Kharge had given some hard times for PM Modi in the last Lok Sabha, by efficiently arguing with his points. As a two-time Kalaburagi MP and former Union Labour Minister, he had made immense contribution for the development of Backward Hyderabad-Karnataka region.

Kharge’s leadership qualities too are liked by several top Congress leaders, which has attracted the attention of the Congress High Command.

Kharge, who is currently AICC General Secretary, has the capacity to bring dividends to the Grand Old Party by organising Backward, Dalit and Minority communities. Kharge who is conversant in Hindi and English, other than this mother tongue Kannada, has the ability to effectively communicate with various sections of society.

Kharge is well-known in the Congress Party, right from Kashmir to Kanyakumari and can pose a formidable challenge to the ruling BJP at the Centre. Even though he was defeated in the LS polls, he has many followers in the Congress and there have been demands within the Congress circles for making him as the AICC Chief, in case the Party is looking for a leader from outside the Nehru-Gandhi family.

I am not in race, says Kharge

Meanwhile, Kharge has dismissed speculation of him becoming AICC President saying it is just “rumours.” He said Rahul will continue as the President, as he is the only unifying force in the Congress now.

2 COMMENTS ON THIS POST To “Mallikarjun Kharge likely to be AICC President?”