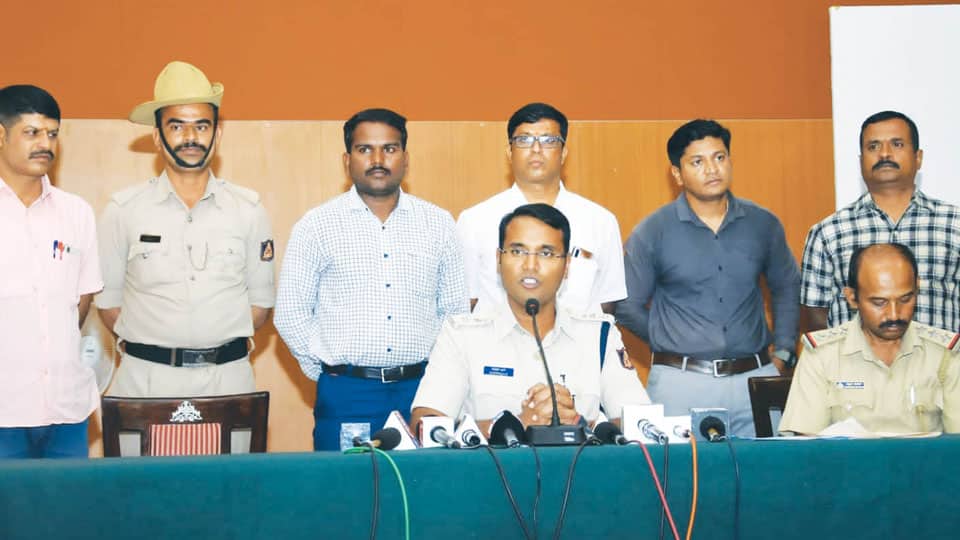 Mysore/Mysuru: The city’s Cyber, Economic and Narcotics (CEN) Crime Police have arrested three of the four persons, who had cheated a man to the tune of Rs. 48,80,200 on promise of getting him a job.

Addressing a press meet at his Office this morning, Superintendent of Police (SP) R. Chethan said that the CEN Police have seized 7 Samsung keypad phones, 4 smartphones, 11 SIM cards, 2 laptops and 3 office seals or rubber stamps besides recovering Rs. 24 lakh from them. The accused have been produced before a Court, he added.

A team from CEN Police led by Inspector Shabbir Hussain, following instructions from the SP and guided by Additional SP R. Shivakumar conducted an operation and nabbed the three accused in Bengaluru.

It may be recalled that the victim, S.S. Kiran, a Mechanical Diploma holder and a resident of Sathagalli in city came in contact with a recruitment company named ‘Eminent Minds’ when he was searching for a job in Google and sent his resume.

After two days, one Kavita, claiming to represent the company asked him to get registered by paying Rs. 1,000. Believing her, Kiran registered his name in the website and he was told to pay money through a link, for getting the job he was searching for. Kiran was offered a high profile job in Bengaluru with an annual salary package of Rs. 10 lakh to Rs. 12 lakh.

Thereafter, Kiran transferred a total sum of Rs.48.80 lakh to the bank account of Eminent Minds, V-Source and other bank accounts on different dates from Nov. 5, 2020 to April 4, 2022, by taking loans and pledging the family’s property.

As Kiran did not get the job even after months, he contacted the recruitment company seeking return of his money. When he was repeatedly told that he would get the job that suited him, Kiran, on getting suspicion as he was getting evasive replies, lodged a complaint with the CEN Police, who registered a case and took up the investigation.